The security situation in the Mediterranean will continue to deteriorate to the point where we can expect Islamist raids on European islands, a recently retired Royal Navy Admiral has told Breitbart London. 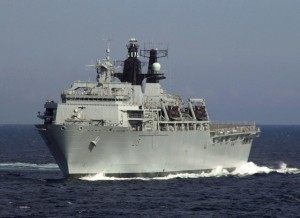 The Government is Dispatching Assault Ship HMS BULWARK This Week

Rear Admiral Chris Parry CBE, the straight-talking former Director General of the Ministry of Defence Development, Concepts, and Doctrine Centre, the government body tasked with foreseeing future strategic threats, made the comments in an interview this week as European nations gathered to discuss the sudden migrant crisis gripping the Mediterranean.

The Threat of Islam

Parry, who warned in a government paper in 1990 that Islam would replace Communism as the main threat against the West and accurately predicted the collapse of African and Arab nations during the so-called ‘Arab Spring’, told Breitbart London he regretted the government was only taking action now, and had not heeded his warning earlier. The Falklands veteran said his warnings were ignored in 2006 when he wrote a major paper on future threats, as the Labour government of the day deemed speaking about Immigration as racist. 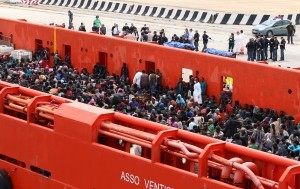 Large Numbers of Asylum Seekers are Received by Italian Border Police After Rescue in the Mediterranean. It is Estimated by The United Nations That Half a Million Will Attempt the Journey This Year

“When I said these things in 2006, my political masters told me to drop it, that it was racist, but I told them it was just what came out of the analysis of the raw data.

“the government interpreted my report as having a go at immigration which was a ‘verboten’ subject in those days, it was all about multiculturalism. Any mention of immigration was considered to be ideologically incorrect. But I didn’t mention immigration, I merely said the world was heading for a migratory pattern that is on a par with the end of the fifth century”.

A speech given by Parry in 2006 at the Royal United Services Institute was reported by The Times after he said the migratory patterns that would emerge in the coming decade would resemble “the 5th century Roman empire facing the Goths and the Vandals”, as European nations experienced a process of “reverse colonisation”.

Although Parry said he stood by his comments of moving diasporas and large populations of migrants with no allegiance to their new homes destabilising nations such as the UK, he said the increasingly fragile Mediterranean was more of a threat to Europe. Libya, now an increasingly lawless state after the British-backed toppling of former dictator Colonel Muammar Gaddafi, is fuelling this change in the Mediterranean as it becomes a haven for criminals engaging in people smuggling.

Parry said at first, the switch from people smuggling as a profitable and comparatively risk-free criminal activity to piracy of the sort seen off the lawless Horn of Africa would be driven by a profit motive. He said:

“It is only a matter of time before we get crime and piracy off the North African coast. People will see it as a business opportunity and they will take it.

“People used to call them Barbary pirates, and they will come back when you have a collapse of governance if there isn’t a strong system of international control in the Mediterranean. You can compare it to what Jessie James is reputed to have said when asked ‘why do you rob banks?’ – ‘it’s where the money is’!”. 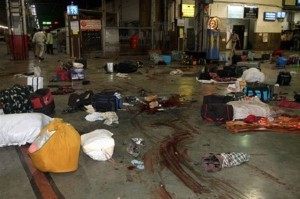 During the last Caliphate, ‘Barbary’ pirates from North Africa grew incredibly rich by attacking European and American ships in the Mediterranean, taking the cargoes and holding the crews hostage. Many would be sold into slavery, with young white women and girls being particularly prized, while others were ransomed back at enormous profit, creating an income stream also used by the new Caliphate established by the Islamic State today.

Terror From the Sea

Parry said that isolated attacks on easily overpowered craft such as yachts could be expected soon. At least two coast guard ships have already been fired upon by Libyan people smugglers, as they used AK-47s to recapture impounded smuggling boats. 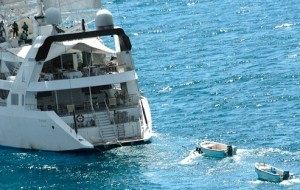 Somalian Pirates, Even With Minimal Seafaring Experience Used Crude Ships Combined With Readily Available Assault Rifles and Rocket Propelled Grenades With Great Effect to Enrich Themselves by Capturing Merchant Ships and Yachts off the Horn of Africa. Pirates Can be Seen on the Upper Deck of Their Yacht Prize / Reuters

Citing the 2008 Mubai terror attack in which Islamist killers used inflatable speedboats to land commandos to kill over 150, Parry said terrorist groups in Northern Africa, a number of which have already sworn allegiance to the Islamic State, could launch raids against southern Europe. Such attacks were common in the 17th and 19th centuries, when Caliphate ships would raid coastal settlements in Italy, Spain, and even as far afeild as Cornwall in England to capture slaves and hostages for ransom. Parry remarked:

“90 per cent of the wealth, both personal and corporate in the Mediterranean is on the northern shore and 10 per cent is on the south. You have a demographic explosion all across North Africa, and an ageing demographic in Europe. That is all the historic ingredients for terror and crime.

“We will soon be experiencing minor hit and run attacks on remote parts of Europe, like Malta and the Greek Islands”.

It is possible for Europe and Western civilisation to forestall these attacks, Rear Admiral Parry said, even if the best chance for peace in the Mediterranean had already been lost, as the governments capable of maintaining peace in North Africa and the Levant had already collapsed in the Arab Spring. In his message to policy makers, Parry was unapologetic about the role Britain and other maritime nations like the United States, Canada and Australia had to play:

“Long term, we have to stabilise the whole community around the Mediterranean… we have to be able to hold our maritime borders, because we have very aggressive Islamism which wants to recreate the extent of Islamic lands the Middle Ages.

“If you look at the maps put out by the Islamic State, it is pretty clear what they want back. Italy, Spain. They want back what they once had. Islam is a very territorial religion.

“If there isn’t the political will or military ability to face down threats off the North African littoral, be it migration, criminality, or terrorism, then we will get progressive erosion. We will get raids on coasts, we will get yachts intercepted at sea, we will get merchant ships subject to terrorist, pirate, or criminal attack.

“The Western world needs to have more self belief in its own values, it has to hold its nerve, and we have to rediscover a lot of self-reliance”.

Praising Tony Abbott’s policy of sinking migrant ships with naval gunfire and returning people to their home countries where possible, Parry remained sceptic that the sudden tough talk about sinking smuggler boats in Europe would actually happen, remarking that sending in special forces teams to Libya would be like “putting your fingers in a mangle”.

The United Nation’s International Maritime Organisation (IMO) should be taking the lead in the Mediterranean, but he didn’t hold out much hope for their getting involved in a meaningful way either:

“If this sort of thing was happening on land, the area would be crawling with United Nations blue helmets [peacekeepers], but because it’s at sea, it is ignored. The gutless IMO always go for the low-hanging fruit like climate change and emissions control, collecting their grossly inflated pensions and doing bugger all”.