The event came under attack by AK47-weilding jihadists, who were neutralized by a police officer before they could commit mass murder against the free speech art display’s attendees.

Fawstin talked about his unique experience growing up in the Bronx as a Muslim, how his life changed after the 9/11 attacks, and he shared strategies to defeat the global jihadist movement. His artwork is featured throughout the interview.

Breitbart News: You won first prize at the Muhammad Cartoon Contest? What inspired your first-place artwork?

Bosch Fawstin: Quite simply, I wanted to do something different because I’ve been drawing Muhammad for a long time. Ever since the Danish cartoons, and after the Charlie Hebdo attack. Every time something horrific happens. If free speech was under assault, under siege, I drew Muhammad.

This drawing of Muhammad showed him threatening me. He says, angrily, ‘You Can’t Draw Me,” with a sword in his hand. I respond, ‘That’s Why I Draw You.’” 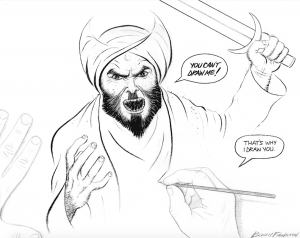 Breitbart News: We understand that you were brought up in Islam. What is your background? How difficult was it to leave Islam?

Bosch Fawstin: I never set out to draw Muhammad. My purpose was never to be a critic of Islam.

I was born and raised a Muslim in the Bronx (New York). I have Muslim parents. We went to a mosque relatively rarely, but we were Muslims.

I did receive some flack for leaving Islam, but I didn’t feel like I left anything important behind. I wanted to get the hell out. Islam had no hold on me whatsoever. It wasn’t a heartbreak, I just left.

Right after I left Islam, 9/11 happened. I revisited everything. I reread the Koran. I read countless books on jihad, Islam, and Muhammad. I knew as a cartoonist, as an artist, I had a tool to respond to the atrocities. I made sure I knew Islam very well before making any move.

I became a follower of Ayn Rand’s philosophy and remain so to this day. Ironically, I went from the most misogynistic philosophy on earth, to that created by a woman. Without her work, I don’t know where the hell I’d be today. 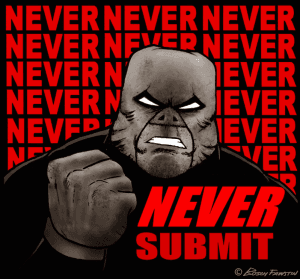 Breitbart News: You grew up in a “moderate Muslim” family?

Bosch Fawstin: Almost all of the women in my generation were beaten by their husbands. There was strong admiration for Hitler in the household, because he killed more Jews than anyone. That’s why I refer to Hitler as Islam’s favorite infidel. They forgive him because he killed more Jews than anyone. we were “Moderate Muslims,” but there was still hardcore misogyny and Jew-hatred in my community.

I would interact with Jews, Christians, and they were my friends. When my father found out, he didn’t like it. They weren’t allowed to come to the house. Nonetheless, a Jewish friend and I were known to betray our religions in solidarity when we shared a pepperoni pizza. 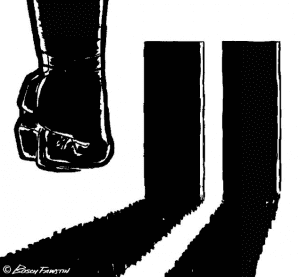 Breitbart News: The beatings of innocent women, the Hitler admiration, and the Jew-hatred. These are events you personally witnessed growing up? 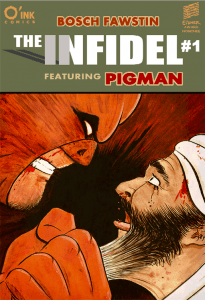 Breitbart News: Are people wrong when they refer to Islam as a religion of peace?

Bosch Fawstin: There are so many people that talk about this issue out of their ass. This is an ideology that we have to understand before we say a word. Bush (43) was talking out of his ass when he said Islam is peaceful. He has no idea what he’s talking about. His job was to protect us, not the ideology of Islam. 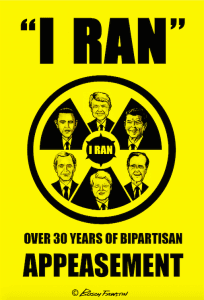 Breitbart News: Who is Pigman?

Bosch Fawstin: I’m an artist, so I created a superhero to combat jihad. I knew that Marvel Comics would never allow Captain America to become the Captain America who fights jihad. That idea was out the window, so I started to think about my upbringing. In Islam, the pig is considered the most vile creature on earth. We never ate pork. One day, my cousins bought the wrong kind of bologna, and we got our asses kicked for that by her father. That’s how extreme it was.

Pigman became my creation. He’s a big guy, 6 foot 5, 250 pounds. He ruthlessly fights jihad. He needed a nemesis, so I created SuperJihad, his twin brother who went down the opposite path after 9/11.

Breitbart News: How do you respond to people who say that you are inciting people and that your work is not protected free speech?

Bosch Fawstin: It’s like saying, ‘the Jews must have done something to provoke the Nazis. They must have said something. Why would they exterminate 6 million of them? Why?’

It’s sick. It is twisted. The fact is, we have the right to insult, to assert our rights.

Breitbart News: What is so sinful about drawing Muhammad in Islam?

Bosch Fawstin: It is so convoluted, historically speaking, because Muslims have drawn images of Muhammad in the past. But today, most are against idolatry, even for the prophet.

Breitbart News: Is there a connection between the terror attack in Garland, Texas with what is going on in the Middle East and the rest of the Islamic world?

Bosch Fawstin: Islam. Everyone’s Koran reads, ‘kill the infidel, wherever you find them.’ Whether they do or not, every Muslim’s Koran has that passage. Alot of them don’t act upon the Koran, but it’s not because of Islam. It’s because they are living, breathing human beings who don’t want to commit those acts.

Breitbart News: What is the best way to defeat Islamic totalitarianism?

Bosch Fawstin: We have to start with the truth. We have to study Islam. We cannot lie about it anymore. We cannot allow the Islamists, so-called intellectuals, and leftists to lie about it anymore. Just look at guys like Bill O’Reilly, who has no idea what he’s talking about. He smeared Pamela Geller because of this event. We are at war. Outside of that building were two savages locked into jihad. People are trying to pretend we were doing something other than celebrating free speech, and demanding our freedom.

Breitbart News: Have you received threats against your life?

Bosch Fawstin: Of course, especially because I am an apostate from Islam. I am worse than your average infidel, because I left Islam.