Elderly residents of the Millmark center in Sörmark, Sweden, were served with eviction notices on Friday after the new owner of their group retirement home declared it was to be transformed into a government asylum shelter.

Although many of those who received letters are reluctant to move, they are being offered sums of money if they keep quiet and leave quickly. Swedish tabloid Värmlands Folkblad reports the comments of one of the 10 people who lives in the centre, identified as Evy, who said of the eviction:

“They kick out the tenants, and they do it very quickly. They say we get some kind of compensation if we move within a month.

“I have not so easy to move on me and I feel comfortable here. I have planted a small garden that I care about and can not imagine staying in an apartment where I do not have anything to do”. 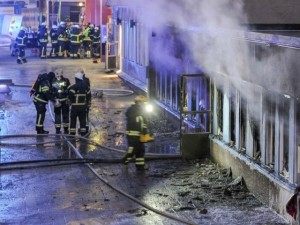 Not all native Swedes have taken kindly to their government’s love of immigration. A Swedish mosque burns in December, after a ‘burning object’ was thrown through a window during prayers. / AP Photo/Pontus Sternberg

Sweden is, per capita, the largest importer of asylum seekers in Europe, with 8,365 asylum applications per million citizens in 2014, compared to just 494 in the United Kingdom. Breitbart London reported earlier this week on the extraordinary lengths the Swedish government was going to, to make even returning Jihadists from the conflicts in Syria and Iraq feel welcome. Terrorists will be given free psychological help with traumatic experiences in warzones they volunteered to join, and will be rewarded with job offers upon returning so they don’t “feel alienated” in Swedish society.

Reacting to the jobs for terrorists plan, a Swedish soldier facing redundancy after returning from fighting in Afghanistan lamented: “There is no permanent job waiting for me when I come home”.