Fistfight breaks out at Yemen peace talks in Geneva 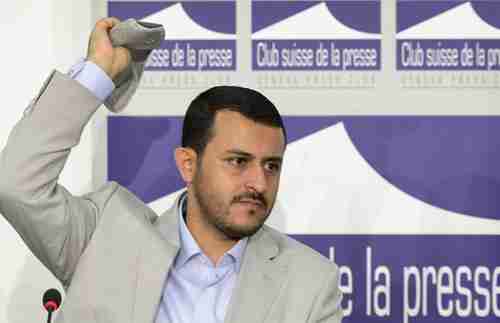 It looks like the United Nations sponsored Yemen peace talks in Geneva are not going to end the war in Yemen after all.

A news conference given by Hamza al-Houthi, the head of the Houthi delegation, was interrupted when an anti-Houthi protestor, a woman in a pink headscarf, threw a shoe at al-Houthi, calling him a “criminal.” He caught the shoe and threw it back. There followed a fistfight between the Houthi supporters and protesters, before the latter were escorted out.

Meanwhile, the fighting is continuing in Yemen. There are daily air strikes by the Saudi coalition, mostly at Houthi targets in the capital city Sanaa. Iran-backed Houthis are battling Saudi-backed Sunni tribesmen in several places. Each side gives a daily press briefing explaining why they’re the good guys and the others are the bad guys. Internet trolls on both sides abound. France24 and Daily Star (Beirut)

According to a report in Debka’s subscriber-only newsletter (sent to me by a subscriber), Iran’s Supreme Leader Ayatollah Seyed Ali Khamenei has relieved Gen. Qassem Soleimani in charge of his Syria command. I like to reference Debka’s newsletter because it contains valuable insights into what’s going on, but it is written from Israel’s point of view, and sometimes gets things wrong.

This was taken as a major affront by the elite arm of the Revolutionary Guards Corps (IRGC).

The ayatollah’s marching order left Soleimani in charge of Iran’s military and intelligence operations in Iraq, Yemen and Lebanon for the time being, but excluded Syria, where military setbacks were piling up too critically to overlook. The Al Qods chief’s promise of “major developments,” on June 2 — after he had rushed over to Damascus to deal with the crisis of Palmyra’s fall to the Islamic State — turned out to be empty rhetoric. His bravado in stating “In the next few days the world will be pleasantly surprised from what we (the IRGC) working with Syrian military commanders are preparing,” was not been followed up. The suggested dispatch of thousands of Iranian troops to the Assad regime’s rescue never materialized. …

Since then, the plight of the Syrian regime has gone from bad to worse, with the Islamic State and Syrian rebels taking turns cutting off chunks of territory; Hezbollah stalled in its effort to dislodge rebel forces from the Qalamoun Mountains and, worse still, helpless to stem the war’s spillover into Lebanon.

The Iranian command governing the two campaigns has ground to a halt pending Tehran’s appointment of a new boss to replace Soleimani.

In fact, Soleimani did not really do very well in Iraq, either. Originally, Soleimani and his Shia militias were going to recapture Tikrit from ISIS. He was going to do it within a few days, without the help of US airstrikes. Instead, Soleimani and his Shia militias had to retreat, and Soleimani fled to Tehran. Afterwards, the Iraqi army captured Tikrit with the help of US airstrikes. ( “24-Mar-15 World View — Iraq’s battle for Tikrit reaches a standstill, humiliating Iran”) Debka (subscription)

Thursday was supposed to be the “drop dead” date for reaching a deal so that Greece could make its 1.6 billion euro debt payment to the International Monetary Fund (IMF) by June 30. According to analysts, Thursday’s meeting of the Eurogroup finance ministers was the last chance to make a deal and still have time to get the deal approved by the German parliament in time to release bailout funds to Greece by June 30.

However, Thursday’s meeting ended with no deal. Greece has been asked to reduce pension costs by increasing retirement dates over the next ten years, and to increase its value-added tax. Greece’s prime minister Alexis Tsipras has refused to do any of this. The discussions have become extremely acrimonious, and many European officials have expressed the feeling, one way or another, that they are sick of Greece and don’t care what happens.

According to one analyst I heard, Thursday was not really a final “drop dead” date. If a deal can be signed by June 30, then the European Central Bank (ECB) could offer Greece a bridge loan, enabling it make its payment to the IMF, until the deal is approved by Germany’s parliament, according to this analyst.

This scenario would fit the logic of the “Game of Chicken” that is being played. The logic of the Game of Chicken, where two cars race towards each other at top speed to see who veers first to avoid a collision, is that neither car veers until the last nanosecond, if at all. So we won’t actually know until the midnight deadline on June 30 whether Greece will default.

Another analyst pointed out that a default does not mean that Greece has to leave the eurozone. Greece could default within the eurozone and permit harsh capital controls on Greek banks, imposing great hardship on the Greek people for years to come. However, this may not be a politically possible solution, as the Greek people may prefer to return to the drachma currency instead. Either way, the result would be a huge nightmare. Kathimerini (Athens) and Telegraph (London) and Gulf News (Dubai)