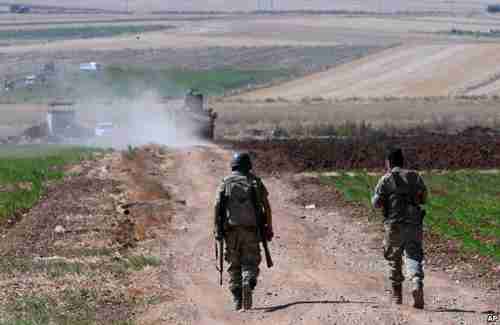 Terrorists opened fire at the U.S. Consulate in Istanbul, Turkey, on Monday. No one was killed during the assault, but one of the two female attackers was killed by police as she fled. A far left terrorist group, the Revolutionary People’s Liberation Army-Front (DHKP-C) took credit for the attack.

Earlier Monday, an overnight bomb attack at a police station in Istanbul injured three policemen and seven civilians and caused a fire that collapsed part of the three-story building. Unknown assailants later fired on police inspecting the scene of the explosion, sparking another gunfight with police that killed a police officer and two assailants. No one has claimed responsibility, but government sources blame the terrorist Kurdistan Workers’ Party (PKK).

Also on Monday, four policemen were killed in southeastern Turkey when terrorists fired at a helicopter, and when an armored vehicle was attacked by a roadside bomb. Once again, the PKK was blamed.

Things seem to be changing very quickly in Turkey, ever since the July 20 massive terror attack on Suruç. Since then, Turkey has rapidly changed from a country determined to avoid war to wars on multiple fronts, fighting the self-described Islamic State (IS or ISIS or ISIL or Daesh) in Syria and Iraq, the PKK in northern Iraq and southeastern Turkey, and now the DHKP-C in Istanbul. It’s amazing how quickly things can change.

The Revolutionary People’s Liberation Army-Front (DHKP-C) is listed as a terrorist organization by the United States and Turkey, and was responsible for a suicide bombing of the US embassy in Ankara in 2013. Both the PKK and the DHKP-C are far left terrorist organizations, and they have cooperated in the past, although it is not known whether Monday’s attacks were coordinated by the two groups. Today’s Zaman (Istanbul) and Hurriyet (Ankara) and AP

Russia’s recession deepened substantially in the second quarter, as the gross domestic product (GDP) shrank by 4.6% compared with a year earlier.

Earlier estimates that the GDP would fall only 3.6% were based on the assumption that oil prices would be above $60 per barrel. But oil has continued to fall, and Russian oil is now selling for just $57 per barrel, down 47% from a year earlier. Russia relies on oil and gas for about half of its budget revenue. This has caused the ruble currency to lose about 20% of its value since mid-May, 43% in the past 12 months.

Russia’s president Vladimir Putin is increasingly trapped, running out of options. This is particularly true in Ukraine. Russia invaded and annexed Crimea, and has invaded and controls eastern Ukraine. But instead of a glorious return to Novorossia (New Russia), Russia is stuck in a massive economic quagmire in Ukraine that’s further draining Russia’s treasury.

Putin badly needs a relaxation of the Western sanctions that were imposed after the annexation of Crimea, but for that to happen, he would need to climb down in Ukraine, a move that would undermine the whole rationale for his rule and infuriate the nationalist supporters who make up his base. AFP and Bloomberg and RFE/RL

Germany’s bond yields are below zero. France’s two-year bond yields are less than -0.2%. In fact, $1.5 trillion of securities issued by eurozone countries have negative yields. That 23% of the market.

Normally when you purchase a bond, it is like a savings account that pays interest. If the yield is 2%, then if you sell the bond a year later, you could expect to have earned 2% interest.

But when a bond’s yield is negative, that means that you lose money when you sell it. You buy the bond for $1,000, and then a year later you sell it for $998.

Why would anyone do that, you may ask? If you’re a big institution with millions of dollars, then you have to put it somewhere. With a negative bond yield, it means that you’re putting it somewhere safe, and you’re paying someone to keep it safe.

Eurozone inflation was at 0.2% in July, well below the 2% target set by the European Central Bank (ECB). The eurozone had four months of deflation before April. The ECB is considering more quantitative easing to try to prevent any further deflation. Bloomberg and Reuters