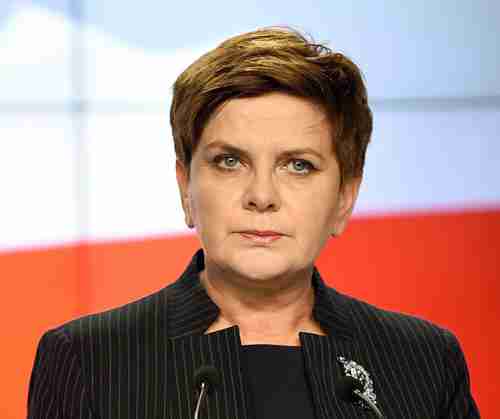 Poland’s eurosceptic Law and Justice party (PiS) claimed victory on Sunday, after exit polls showed that it won 39.1% of the total, far higher than expected. This gives PiS enough seats in parliament to govern alone, without having to form a governing alliance with another party.

The party’s leader is Jaroslaw Kaczynski, who is disliked by many people in Poland, and who has led the party to defeat in recent elections. In this election, Kaczynski put up Ms. Beata Szydlo to become prime minister if PiS wins, which appears certain. Some people suspect that Szydlo will be a puppet controlled by puppetmaster Kaczynski.

Kaczynski promised to be nice to the people his party had just defeated:

Some of the positions of PiS are:

PiS wants to build stronger ties with the rest of Central Europe, a bloc that Warsaw hopes to lead, in opposition to many of the policies of Western Europe. BBC and Politico (EU) and SwissInfo

With Europe’s refugee crisis reaching a tipping point that could be an existential threat for the European Union, an emergency meeting of the European Commission (EC) in Brussels on Sunday reached agreement.

Nearly 250,000 migrants have passed through the Balkans since mid-September, and cold weather has not slowed the surge. Croatia said 11,500 people crossed into the country Saturday; Croatia has been waving the migrants through into the tiny country of Slovenia. Slovenia has been overwhelmed, with 60,000 arriving in the last ten days.

The situation is truly serious. If we don’t deliver some immediate and concrete actions on the ground in the next days and weeks, I believe the whole European Union and Europe as a whole will start to fall apart.

The apocalyptic words were triggered by visions of thousands of migrants having to sleep on the ground in freezing weather, and hundreds dying from hypothermia at the closed border crossings.

Everyone seemed to agree that the problem could not be solved without Turkey’s help in blocking migration from Turkey to Greece, but Turkey was not represented at the meeting.

Because temperatures are already falling below freezing at night, the EC meeting focused on getting shelter for the migrants as quickly as possible. Reception centers will be built by the end of the year in Greece and the Balkan countries, to hold 100,000 refugees. Also, the EU will send 400 police officers to Slovenia, to help with the surge of migrants.

The plan agreed to by the EC nations have the following main points:

It is one thing to agree to a plan, and another thing to spend the money to implement it. For one thing, it is not clear to me how these reception centers will be built in time to prevent mass hypothermia. It may be that one (unstated) part of the plan is to keep as many refugees in Greece for as long as possible, since the weather is warm there. Politico (EU) and BBC and Guardian (London)

Hey kids, what time is it? In Turkey, it’s Erdogan Time!

Sunday was the day in the Eastern European Time (EET) Zone that clocks were turned back one hour, to end daylight saving time. (In North America, this change is made one week later, on November 1.)

However, Turkey is in chaos because president Recep Tayyip Erdogan has decreed that the time change will be delayed for TWO weeks in Turkey, until November 8, the first Sunday after the November 1 elections.

The result is mass confusion in Turkey about what time it is. According to news reports, people are already missing appointments, including Muslim prayer times.

According to one British expat:

We’re on special ‘Erdogan time’ as he decided not to implement daylight savings until after the election.

Unfortunately, while he CAN hold back time, he CAN’T hold back automatic clocks which seem to have gone ahead and changed the hour regardless. Hence we’re all very confused.

According to one Twitter user: “For the next two weeks #Turkey is on EEST… Erdogan Engineered Standard Time.”

Erdogan apparently has difficulty learning this lesson. On March 30, 2014, Turkey delayed the switch to daylight savings time by one day. Flights were delayed, and automatic baggage handling system at the İstanbul airport malfunctioned on Sunday morning when passengers started checking in due to synchronization problems. Today’s Zaman (Istanbul) and BBC and Today’s Zaman (30-Mar-2014)