The socialist Venezuelan government has begun to purge its public agencies of workers who voted for the opposition in the December 6 election, which ended a 16-year socialist streak in the legislature. At least one agency has posted a list of the names of those fired, calling them “traitors.”

“Traitors … Out of Our Institution,” read a list of names posted before the Venezuelan Food Production and Distribution Agency, notifying those who worked at the agency but voted for the anti-socialist opposition that they were fired. The list included dozens of names, and the decision to publicly post their names appeared intended to publicly shame the workers, as well as goad socialist loyalists into harassing the dismissed workers.

The poster with the names of the fired “traitors” first appeared in the local newspaper Correo del Caroni. 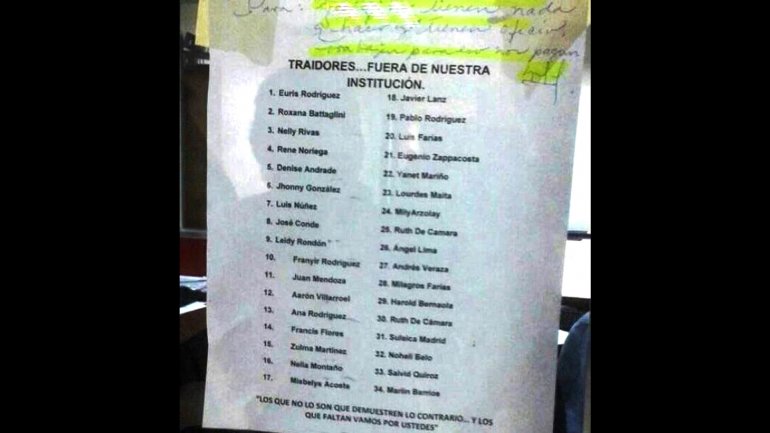 “Those who are not [traitors], prove us wrong … and those that are left, we are coming for you,” reads the bottom of the list.

While the most aggressive government revenge move against opposition voters so far, it appears not to be the only one. According to the Diario Las Americas, workers at several other government agencies have not yet been fired, but report “harassment, threats of firing, and labor discrimination for political reasons following the December 6 election.” The newspaper names the Venezuelan Education Agency, the Foundation for Children, and at least one mayoral office as having reported problems of discrimination towards anti-socialist voters.

The Venezuelan opposition won the December 6 election decisively, taking 109 seats to the Socialist Party (PSUV)’s 55. President Nicolás Maduro has vowed to “recognize these adverse results, and accept them and tell our Venezuela that the Constitution and democracy has triumphed.”

He has since taken measures that can be interpreted as threatening any opposition force that may seek to take him out of power. On Tuesday, for example, he ordered the retreat of military personnel from civilian public service positions, so as to place them in full “active duty.” The move follows a speech on Sunday in which Maduro asserted that Venezuela was engaged in “unconventional warfare” and warned, “[M]en and women, prepare to defend the nation.” He added, “We will not allow the right and the bourgeoisie, from their newfound positions of power, to surrender our sovereignty, independence, and the justice we have constructed during these years of sacrifice.” He explicitly condemned the United States, once again, for waging “economic war” against socialism.

While the threats appear directed at the right, Maduro has also made clear he intends to purge any vacillating elements from the PSUV. His first move following the election defeat was to organize a “socialist crusade,” convening all 980 PSUV delegates to debate the future of the party. “We have to close ranks within our people,” he warned last week. He later warned on national television that he might halt public works programs to exact revenge upon voters. “I wanted to build 500,000 housing projects next year, but now I’m doubting it. Not because I can’t build them, but I asked for your support and you didn’t give it to me,” he said on television last week.

National Assembly President Diosdado Cabello, who may lose his position as the nation’s second-in-command when the opposition takes control of the Assembly, has not made similar explicit threats, though on his own television show he has asserted that the opposition will ensure the nation’s poor will suffer. “Now comes the punishment for the people when they take away your pensions, your homes, when there is no more free medicine or health care, when there is no more free education,” he said last week.

The Democratic Unity Roundtable (MUD), the opposition party in question, won its seats on a platform of ending government persecution of dissidents, liberating political prisoners, and calling for “peace” and an end to politically motivated violence. The Maduro government has openly used violence against dissidents, including opposition legislators, to keep the opposition from developing a strong following.