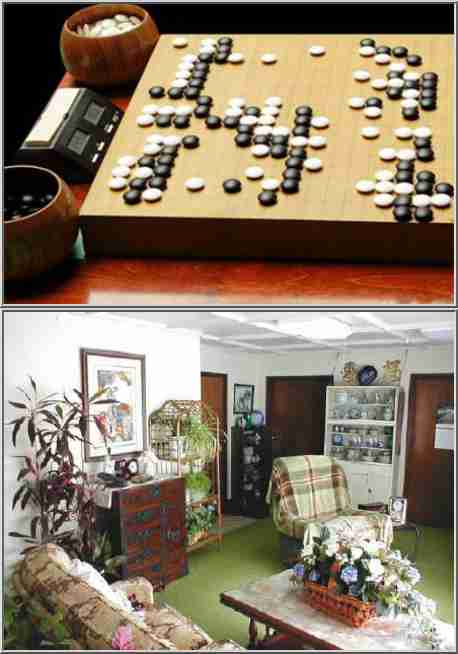 Two pattern recognition problems. Top: Find the best move in a Go position. Bottom: Find the clock in the room.

Google’s artificial intelligence (AI) division, DeepMind, announced that it has developed a software program called AlphaGo that can beat human masters at the ancient Chinese game of Go.

This is considered a significant milestone in AI because the game of Go is massively more complex than the game of chess, which was conquered by computers in the 1990s. It is also significant because it brings the world one step closer to the Singularity, the point in time where computers are more intelligent than humans.

The game of Go is thought to have originated in China 3000-4000 years ago. It is the oldest game that is still played in its original form. Today, it is popular throughout Asia, and it is played to a lesser extent in Europe and America.

Players take turns alternately placing white and black stones on a 19×19 board. If your stones completely surround your opponent’s stones, then you have captured his stones, and you have gained territory. But if you are too ambitious and overreach by trying to capture too much territory, then your opponent can turn the table and surround your stones. The best players, who have been playing for decades, develop an intuition that allows to play unexpected moves that permit a group of stones at one end of the board to link up with stones at the other end.

The two pictures above show two different “pattern recognition” problems. The top picture shows a typical Go position. There are too many possibilities for someone to use simple reasoning to find the best move. Instead, a master who has played hundreds of thousands of games over decades will recognize patterns from previous games that show what the best move is.

This kind of pattern recognition has been extremely difficult for computer software to master, because the computer would have to create a database storing perhaps trillions or quadrillions or quintillions of pictures, and then the software has to be able to compare the picture or the game position to all those pictures stored in the database.

Amazingly, the human mind is pretty good at that, because it can store huge numbers of images and then do many comparisons in parallel. But in the past, computers did not have enough memory for such a large database, and did not have enough computing power to do all those comparisons. But as computers have become more and more powerful, doubling in power every 18 months or so, huge pattern matching applications have become more feasible, and this has led to the implementation of a winning Go-playing computer program AlphaGo. American Go Association and MIT Technology Review

As I described in my article “Artificial Intelligence and the Singularity by 2030”, the human brain uses two kinds of problem solving methods. One is illustrated by the bottom picture above, where the brain uses massive pattern matching to quickly find the clock in the picture.

The other is ordinary step-by-step reasoning, where you think “If I do A then B will happen, and I can do C.” The game of chess was solved using computer software that does this kind of reasoning, employing something called a “minimax algorithm” that was invented in the 1960s.

The minimax algorithm works the same way that an ordinary person plays chess. You think, “If I make move A then he’ll make move B and I can make move C, but if I make move X they he’ll be forced to play move Y and I’ll win.” Chess-playing programs do the same thing, and can examine millions of positions in this way, evaluating them to decide what the next move should be.

The minimax algorithm requires that you have a simple way to evaluate a chess position numerically. A good chess playing program can evaluate any position by adding together numbers for the amount of material, for how much of the board is controlled, and other factors such as King safety.

In the game of Go, no such simple numerical evaluation method exists. There are dozens of white and black stones scattered over a 19×19 board. You could try some simple method of counting occupied positions, or something like that, but that would never capture the complexity of the position.

So the AI experts at Google’s DeepMind used the power of modern computers to develop an advanced pattern matching technology. The technology known is as “neural networks” that was developed in the 1980s because it supposedly simulates the way that networks of neurons in the human brain perform pattern matching.

They created an enormous database of 30 million Go game positions developed from human expert games and by allowing the computer to play against itself for days. They developed advanced neural network applications to perform massive numbers of comparisons of a board position to those stored in the database. The “value networks” perform pattern matching with the database to evaluate board positions, and the “policy networks” perform pattern matching to select moves.

Using this approach, they developed the AlphaGo program and tested it against a human European Go champion, Fan Hui, winning five games to zero.

In March, AlphaGo will play a match to be held in Seoul, South korea, against one of the world’s best players, Lee Sedol. 9 To 5 Google and Nature

As I wrote in “29-Dec-15 World View — Artificial Intelligence breakthroughs in 2015, the Singularity by 2030”, the year 2015 saw many major achievements in artificial intelligence, and the Google’s AlphaGo technology continues that trend.

What is interesting is that, as recently as 2014, most experts thought that for a computer program to play Go at a master level was at least a decade away, and possibly several decades. This illustrates how many people in the computer field underestimate how rapidly computer AI is improving, and how quickly the Singularity is arriving.

As I wrote in the article referenced above, I estimated in 2004 that the Singularity would occur around 2030, and I have no reason today to change that estimate. However, people tell me all the time that computers will not be as smart as humans for many decades, even centuries, because we do not yet understand enough about the human brain. However, this misses the point. Humans are smarter than apes even though we do not understand apes’ brains, and computers will become more intelligent than humans by using technologies that do not require understanding the human brain.

In fact, we are going to start seeing rapid changes well before 2030. According to a new report from the World Economic Forum, AI is to take away 5 million jobs from humans in the next five years.

Jobs that are most at risk of this transition to artificial intelligence are in administrative and office divisions, so much so that some jobs today are already being replaced by mobile apps and algorithms linked to the internet. For instance, a website may offer finding better hotel deals than a travel agent, or a mobile application can help you learn better Mandarin or French than a personal instructor. Other sectors that are also at risk are manufacturing, construction, health care, and even the arts and entertainment.

And it’s my personal estimate that AI will replace most computer programmers’ jobs within the next five to ten years. Wired (12-May-2014) and StGist