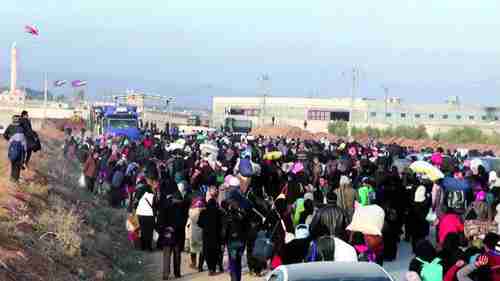 Thousands of Syrians massed on the border with Turkey (AFP)

The 300,000 residents of the city of Aleppo, formerly the commercial hub of Syria, are being used as pawns in a deadly game that will lead inevitably to mass starvation.

As we reported yesterday, Syrian regime troops are encircling Aleppo with the aid of massive Russian airstrikes on civilian neighborhoods. Tens of thousands of Aleppo residents are fleeing the city, heading north, hoping to enter Turkey, and from there to travel on to Europe. However, Turkey has already taken in 2.5 million Syrians since the war began, and is now blocking the border, forcing tens of thousands of refugees to mass on the border.

It is believed to be Russia’s strategy to kill as many civilians in Aleppo as possible, so that the rest will flee to Turkey, leaving the city abandoned for the regime to take over. Russia would also gain the advantage of tens of thousands more refugees pouring into Europe.

Turkey apparently plans to try to thwart this strategy by keeping the border closed. Some reports indicate that Turkey is providing food and medicine to the Syrians in Syria, effectively making the northern region of Syria a refugee camp.

Many residents of Aleppo are remaining for now because they know that the border is closed, and they will be prevented from entering Turkey. According to one resident, “If people had guarantees they could enter Turkey, everyone would leave. I would leave.” Washington Post and BBC and Military.com

Iran’s nuclear deal with the West has exposed major generational political fault lines within Iran’s government. Supreme Leader Ayatollah Seyed Ali Khamenei was making one demand after another, apparently to torpedo implementation of the agreement.

Akbar Hashemi Rafsanjani, one of the Islamic Republic’s founders, a former president and now head of Iran’s Expediency Council, publicly disagreed with Khamenei’s orders and brushed aside Khamenei’s new demands. Eventually, Khamenei had to back down and allow the agreement to be implemented. ( “29-Oct-15 World View — Iran’s government splits over implementation of nuclear deal” )

Khamenei is in the generation that fought in the 1979 Great Islamic Revolution and is today in the hardest of the hardline Iranian political factions. A feature of these hardliners is that they are using similar tactics to the ones that were successful in 1979, including the very successful taking of American embassy personnel as hostages.

Rafsanjani is in the same generation as Khamenei, and adheres to the same “revolutionary principles,” but is considered a “moderate” or “pragmatic” because he combines these principles with a desire to modernize Iran and integrate it with the international community.

The political fault line exposed by the nuclear negotiations still exists and is worsening, with a new election approaching on February 26 to elect a new Majlis (parliament) and Assembly of Experts.

There is now a vicious political battle in progress over which candidates will be permitted to run in the elections.

In December, Iran’s hardline watchdog body, the Guardian Council, ruled that thousands of potential candidates, almost every one from the moderate political factions, were to be disqualified from running in the election. The Guardian Council is under the control of Khamenei, and is an unelected body of 12 Islamic jurists and hardline clerics, that can veto election candidates for reasons such as lack of commitment to Islam and the constitution.

Khamenei said, “Those who don’t have faith in the clerical establishment, should not be allowed to perform a duty.”

The objective of the mass disqualifications seems obvious: To prevent the Majlis from implementing many reform policies favored by Rafsanjani and the current president, Hassan Rouhani. Khamenei’s remark about “those who don’t have faith in the clerical establishment” was an offensive insult to the moderates, by implying that their support for political reforms might be treasonous and a religious apostasy.

Unsurprisingly, this has created a firestorm in Iran, with many clerics taking offense at the disqualifications. Many pointed out that Khamenei’s act was self-defeating.

Ayatollah Kazem Nourmofidi said, “Disqualification of those who believe in the Islamic Republic, Islam and the pillars of our system… will create a deep rift between real believers of our system and the establishment.”

Grand Ayatollah Ali Mohammad Dastgheyb, in a letter to the Guardian Council, said: “You have acknowledged the right of only 30 percent of our voters, ignoring rights of others. Don’t you think it will create a huge rift between the people and the leadership?”

Even worse, there are concerns that public anger at Khamenei and the other hardline geezers is going to trigger massive anti-government protests. This happened in the 2009 elections, resulting bloody massacres of peaceful protesters by Khamenei’s storm troopers. (From June 2009: “Iran’s Khamenei appears desperate, as reports of Tehran massacres grow”)

The anxiety over a possible repeat of 2009 seems febrile, as exemplified by this extraordinary directive from the Herasat Office, Iran’s domestic intelligence and security forces, entitled: “Issue: Paying workers’ wages in the final days of the year”:

With greeting and respect, you are hereby informed that given that the end of the [Persian calendar] year is approaching and taking note of the instructions handed down by the minister and competent authorities regarding timely payment of workers’ wages and back pay, you must instruct that all wages, bonuses, back pay and overtime pay be paid no later than February 24, 2016 in order to prevent any possible gatherings or sit-ins and their related negative consequences.

You are reminded that given the upcoming elections of the Assembly of Experts and Islamic Assembly (Parliament), this issue must be treated with especial importance and sensitivity in order to prevent any misuse of this matter for publicity in particular in the realm of workers’ protests.

In other words, a lot of Iranians haven’t been paid their salaries, and the Khamenei regime is ordering that they be paid the money they’re owed by February 24, two days before the election, in the hope of defusing any potential mass protests. Tasnim News (Iran) and Memri and Reuters (21-Jan) and National Council of Resistance of Iran

America in the 1960s and 1970s was one generation past the end of World War II, and went through a generational Awakening era, with a “generation gap” that pitted the generations of war survivors (the GI and Silent generations) against those who grew up after the war (the Boomers). The result was “days of rage,” street protests, the Summer of Love, the national Democratic convention riots, the Kent State shootings, Watergate, and regime change.

Iran is now in a period one generation past the end of its last crisis war, the 1979 Great Islamic Revolution and the Iran/Iraq war that climaxed in 1988. Iran is going through a similar “generation gap,” pitting the Revolution survivors versus the generations growing up afterwards.

Although there are various splinter groups in Iran’s government, they break down into three major categories:

Iran’s constitution contains a central contradiction that has caused one political crisis after another: the assumption that elected institutions would function in harmony with the rulings handed down by religious jurists.

Ayatollah Rouhollah Khomeini, the first Supreme Leader of the Islamic Republic, assumed that, in a rightly ordered state, God’s will (as determined by the clerics) and the people’s will (as manifested through elections) would coincide. This happened during the first years of the generational Recovery era following the crisis war. But as young people with no personal memories of the war entered their teen years, anti-government protests began, and had to be violently put down by bloody massacres.

The first major political defeat of the hardliners occurred in the 1997, to replace Akbar Hashemi Rafsanjani as president, when the victory went to Reformist cleric Muhammad Khatami. There were more reformer victories in the 2000 parliamentary elections, gaining more than two-thirds of the seats.

With the younger generations of Reformists increasingly moving into positions of power, and as the Principlists die off, the remaining hardliners have been panicking and using the Guardian Council to quash any attempts at political reform, and bloody massacres by the security police to prevent any street protests from becoming effective.

Since then, the moderate Rafsanjani has led the “pragmatists” in their attempt to resolve the constitutional contradiction, by reconciling the injunctions of the Islamic Revolution with the democratic norms espoused by the West. Rafsanjani has had to be careful to reject the Reformists’ demands for regime change, so as not to risk being jailed. (Rafsanjani’s son Mehdi Hashemi Rafsanjani was jailed last year for the crime of “inciting unrest” in 2009.)

Both Khamenei and Rafsanjani are founding members of the Islamic Republic; they both fought in the Islamic Revolution; they’re in the same generation. But they’re bitter political enemies because Rafsanjani wants to implement political reforms that Khamenei dogmatically opposes. The February 26 elections provide the backdrop for a dramatic new battle in their relationship. Eurasia Review and Memri and Asharq Al-Awsat (Riyadh) and Council on Foreign Relations (August 2004) and BBC (15-Mar-2015)