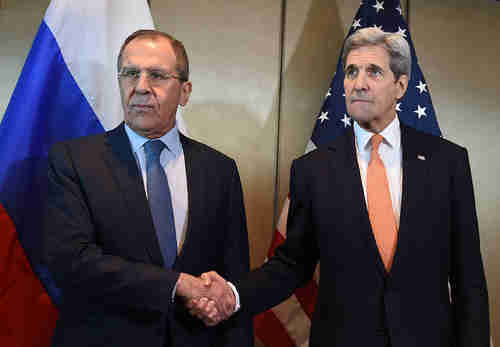 Russia, the United States, and other parties meeting in Munich reached an agreement on the Syria war on Thursday. Not all details are known, but press reports indicate that the following are the terms:

It was just two weeks ago that peace talks began in Geneva. ( “25-Jan-16 World View — Farcical Syria peace process ‘proximity talks’ to begin this week in Geneva”.) Those peace talks collapsed the day after they started, largely because the anti-Assad groups did not want to participate.

So here is the situation:

Tens of thousands of Syrian refugees continue to flee from Aleppo, as Russian airstrikes slaughter large numbers of civilians, and as Syria, Iranian and Hezbollah troops continue to encircle the town, preparing for the final siege and mass slaughter. There are half a million civilians living in Aleppo, and Russia says that they are all “terrorists,” so the slaughter is going to continue under this farcical “cessation of hostilities.”

You would think that US Secretary of State John Kerry would be embarrassed to be part of this ridiculous farce, but as we have seen over and over and over, there is nothing too farcical to embarrass Kerry. Washington Post and LA Times

Described by one Russian analyst as a “little message” to Turkey, Russia has launched a massive surprise military exercise, involving thousands of troops and hundreds of warplanes across southwestern Russia for large-scale military drills. Up to 8,500 troops, 900 ground weapons, 200 warplanes and about 50 warships will be involved in the drills.

According to the announcement from Russia, the purpose of the exercises is to prepare an unexpected event in Ukraine. The invasion of Georgia in 2008 and the occupation of Crimea in 2014 were preceded by massive exercises similar to the current one. The present snap exercises involve mass troop movement close to the Ukrainian border.

Instead, Russian military experts believe the present snap exercises are aimed primarily at Turkey and its North Atlantic Treaty Organization (NATO) allies, if they intervene in the fray. Russia’s order to “prepare massive air raids and repel massive air attacks” does not seem to be directly aimed at Ukraine, which has a small outdated air force, incapable of carrying out “massive raids” deep into Russia to destroy strategically important targets.

The present snap exercise strongly resembles a massive combat prewar troop deployment aimed to take on Turkey if it attempts to intervene in Syria to curtail the Russian-led offensive in Aleppo, Idlib and Latakia provinces. Jamestown and Rudaw (Kurdish) and CBS

The vitriolic hatred of Bashar al-Assad

Whenever I write about Syria’s psychopathic president Bashar al-Assad and his campaign of extermination of against Sunni Muslims, I almost always get comments from al-Assad acolytes and paid Russian internet trolls criticizing me and saying that the United States is the real criminal.

However, one of them gave the game away several days ago when he posted the comment:

“There are no Sunni ‘civilians.'”

Another commenter referred to the opposition groups as “roaches.”

This epithet is very familiar to me from having studied the 1994 Rwanda genocide. The Hutus were incited to slaughter the Tutsis with “You have to kill the Tutsis, they’re cockroaches.”

What happened in Rwanda in 1994 is almost impossible for an ordinary human to believe. Prior to the 1990s, Hutus and Tutsis had lived together, intermarried, and had their children play with each other. When the 1994 genocide occurred, a Hutu might pick up a machete, go to the Tutsi home next door, or down the street, murder and dismember the man and children, rape the wife and then murder and dismember her. Almost a million Tutsis were killed.

In her book, World on Fire, Yale law professor Amy Chua describes how, living in the Philippines, her Chinese ancestry gave her family élite privileges not available to indigenous Filipinos. Her family was wealthy, with numerous Filipino servants who slept in the basement “sleeping on mats on a dirt floor [in a] place that stank of sweat and urine, living on less than two dollars a day. When her chauffeur murdered her aunt, the police investigated and found the motive to be “Revenge.”

Amy Chua says, “Each time I think of [the chauffer] Nilo Abique — he was close to six feet and my aunt was four-feet-eleven-inches tall — I find myself welling up with a hatred and revulsion so intense it is actually consoling.”

Amy Chua described what happened in the 1990s in the Bosnian war:

My aunt’s killing was just a pinprick in a world more violent than most of us ever imagined. In America we read about acts of mass slaughter and savagery; at first in faraway places, now coming closer and closer to home. We do not understand what connects these acts. Nor do we understand the role we have played in bringing them about.

In the Serbian concentration camps of the early 1990s, the women prisoners were raped over and over, many times a day, often with broken bottles, often together with their daughters. The men, if they were lucky, were beaten to death as their Serbian guards sang national anthems; if they were not so fortunate, they were castrated or, at gunpoint, forced to castrate their fellow prisoners, sometimes with their own teeth. In all, thousands were tortured and executed.

Compared to this kind of hatred, the “hatred” that Americans talk about today are silly by comparison — someone who opposes gay marriage is guilty of “hatred.”

So you have to wonder what was going on in Rwanda and Bosnia. If you’re going to kill someone, then just kill them. What’s the point of having one of them castrate the other with his teeth? Where does this level of irrational, psychopathic behavior come from?

Well, it’s part of the human DNA. It’s not unique to any religion or ethnic group. Under the right circumstances – particularly during a generational crisis war – any human being might act that way. I’ve recently discussed this subject at length with respect to the act of rape as a common act of revenge during war. ( “7-Jan-16 World View — German ‘Code of Conduct’ for women shows pendulum swing on gender issues”)

We’ve seen other recent examples of this kind of behavior. Al-Qaeda and ISIS jihadists have tortured and killed people, especially Shia Muslims, in this way. In Burma (Myanmar), Buddhist death squads have been torturing and massacring ethnic Rohingyas and other Muslims in the most brutal possible way. 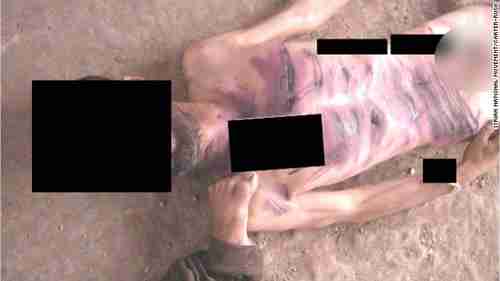 Emaciated man showing wounds from repeated beatings by rod-like object. There are 55,000 photos like this, showing 11,000 corpses from Bashar al-Assad’s psychopathic torture.

So now let’s come back to Bashar al-Assad. It’s been obvious to me since 2011 that al-Assad wanted to exterminate all Sunnis, because of his level of vitriolic hatred of all Sunnis. This was obvious when he started responding to peaceful protests by massacring entire Sunni villages and when his warplanes were bombing schoolchildren as they slept in the dormitories.

It was even more apparent in 2014 when 50,000 photos emerged of 11,000 men who had been tortured with electrocution, eye-gouging, strangulation, starvation, and beating on prisoners on a massive “industrial strength” scale. They were similar to the images found in Nazi death camps after World War II. ( “22-Jan-14 World View — Western leaders sickened by Assad’s ‘industrial strength’ torture in Syria”)

As I’ve said in the past, Bashar al-Assad is the greatest genocidal monster in today’s world, comparable to Hitler, Pol Pot and Stalin. For years, he’s been killing thousands of Syrian civilians every week with complete impunity, using Russian-supplied barrel bombs on civilian neighborhoods. And he’s used sarin chemical weapons on civilians. He uses the most gruesome forms of torture on a personal, individual scale, as well as on a mass scale. There is no mass weapon of destruction, nor any gruesome form of torture, that he won’t use to satisfy his psychopathy.

And he’s being supported in his genocide and psychopathy by Russia’s president Vladimir Putin and Iran’s supreme leader Seyed Ali Khamenei, who are guilty of supporting the same psychopath and genocide, making them war criminals.

Syria is in a generational Awakening era, meaning that the Syrian civil war should have completely fizzled out long ago. In a sense it has, because it’s less a civil war than a proxy war. But what’s kept it going is the intense, vitriolic hatred felt by one person, Bashar al-Assad, and by the willingness of his acolytes, Putin and Khamenei to support him.

And that’s how I knew that the peace process ‘proximity talks’ would never succeed, and how I know that there will not be a ceasefire in Syria, as long as Bashar al-Assad is in power and can count on the support of his acolytes and the war criminals Putin and Khamenei.