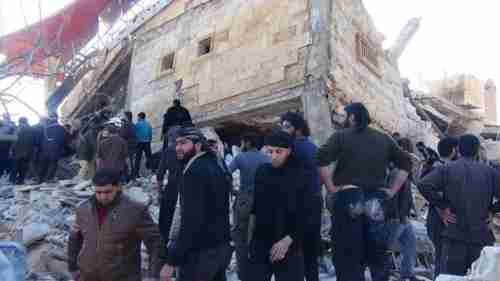 Monday’s missile attacks on hospitals and schools in Azaz, killing dozens, are being called “war crimes.” The missile attacks appear to have been deliberate. The hospitals were run by Doctors without Borders (Médecins Sans Frontières, MSF).

The U.S. State Department condemned the airstrikes, blaming the Syrian regime headed by President Bashar al-Assad for the attack on Azaz. Azaz, which is north of Aleppo near the border with Turkey, has been under massive attack by Kurdish YPG militias, and by the Syrian and Russian air forces.

Syria’s al-Assad regime has a history of frequently deliberately targeting civilians, including schools and hospitals, especially in the Aleppo region:

So deliberate missile attacks by al-Assad on hospitals and schools would be standard operating procedure for al-Assad.

In a separate incident on Monday, four missiles from Russian warplane air strikes struck another Doctors Without Borders hospital, this time in Idlib in northern Syria. CNN and BBC

China is expected next month to announce another 10% increase in its annual military budget, at a time when China’s economy has been slowing, indicating that the military remains a top priority. China has been exponentially increasing its military budget every year for years, as part of its aggressive multi-year military buildup.

There is something new this year: a major restructuring of the military, ordered by the president, Xi Jinping. The People’s Liberation Army (PLA) is being restructured into five military battle zone commands. The Northern Command will have the Korean Peninsula as its main objective, along with Russia’s Far East and Mongolia; the Western Command is geared towards Central Asia and Indian subcontinent; the Southern Command’s objective is southeast Asia and South China Sea; the Eastern Command is targeting Taiwan and Western Pacific; and the Central Command acts as general strategic reserve. There is no single command dedicated to Russia.

As part of revamping its cold war-era command structure, the PLA is cutting 300,000 jobs. Reports indicate that this has caused quite a bit of unhappiness in the ranks. According to one one senior Beijing-based Western diplomat, “Where are the 300,000 going to go? There’s no information. Are the SOEs [state-owned enterprises] supposed to employ them?”

In the restructuring, the navy is taking on greater importance, for two reasons. First because of increased tensions in the South China Sea, where China has been annexing regions historically belonging to Vietnam, the Philippines, and other countries. And second, because Taiwan’s elections in January brought to power a government unsympathetic to Beijing. ( “17-Jan-16 World View — Taiwan’s pro-independence party wins historic presidential election”)

The Eastern Command in the new command structure appears to be specifically aimed at Taiwan. Beijing’s policy is that if Taiwan takes any move whatsoever towards independence, then China will invade Taiwan. China has indicated that it will continue to tolerate Taiwan’s current ambiguous relationship with Beijing, but that it is beginning to run out of patience. So the objective of the new Eastern Command may well be to prepare for an invasion of Taiwan. Reuters and Aviation Week and Focus Taiwan

China’s massive lending binge: four times as much as forecast

China’s banks gave new loans in January for 2.51 trillion yuan ($385.6 billion). This was about four times the lending in December, and also about four times as much as had been forecast by analysts.

As we wrote last week ( “9-Feb-16 World View — Monday’s stock market rout blamed on China’s foreign currency selloffs”), China has been selling off US Treasuries and other assets denominated in foreign currencies in a desperate attempt to keep the yuan (renminbi) currency from weakening into a death spiral.

These new figures suggest that these desperation measures also extend to “printing” trillions of new yuan. Normally “printing” currency has the result of weakening (devaluing) the currency, and so it may be that these two measures are meant to offset each other: The debt binge would inject new money into the weakening economy, which the sale of US Treasuries would attempt to hold the line against further yuan devaluation.

January’s lending binge has not been this high since the 2009 global financial crisis. At that time, China was applauded for “saving the world” by flooding China with trillions of newly printed yuan in order to allow its economy to continue growing. Bloomberg and Reuters