Thousands protest violently over execution of murderer of blasphemy reformer 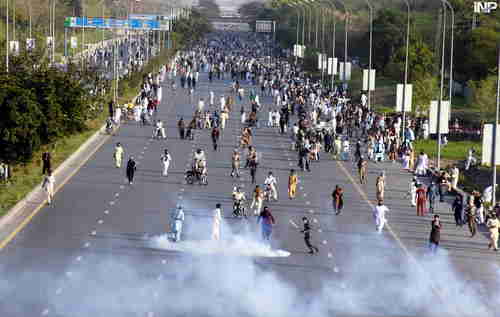 Mobs of protestors move towards capital, wearing masks to protect themselves from the tear gas. (INP)

The federal government called in the army on Sunday night to attempt to control around 10,000 people protesting the execution of Mumtaz Qadri in front of Pakistan’s parliament building in Islamabad when the protests turned violent turned violent. ( “1-Mar-16 World View — Pakistan unexpectedly executes murderer of liberal politician Salman Taseer”)

Mumtaz Qadri was executed by hanging last month, after having been convicted of murdering Salman Taseer, the liberal governor of Punjab province in Pakistan, on January 4, 2011. Qadri was Taseer’s bodyguard. To make sure he was dead, Qadri shot him in the chest 28 times. Qadri later said that he had shot Taseer because Taseer had opposed blasphemy laws in general, and for speaking out in favor of Asia Bibia, a Christian lady accused of blasphemy because she was Christian, and sentenced to death.

The blasphemy laws in Pakistan are absolutely crazy. If someone does not like you, he can claim that you said something that offends Islam or Mohammed, and you can be convicted of blasphemy, sometimes without a trial, and executed. The blasphemy laws are widely used without proof, and executions are becoming increasingly common.

At first those protesting the execution of Qadri on Sunday were peaceful. Then the crowd started throwing stones, and riot police used tear gas and batons to disperse them from the high-security zone outside the parliament building. Then the protesters set a metro bus station on fire, and also set containers on fire outside the Parliament House. A fire brigade vehicle dispatched to the scene was also set on fire.

A statement by the terrorist group Sunni Tehreek claimed that the government had turned the protests violent by attacking “Prophet-loving patriots,” and vowed that the protests would continue.

The terrorists gave the government a list of ten demands. The list called for immediate execution of Asia Bibia, the Christian woman mentioned above whom Taseer tried to protect. The also demanded that Qadri be officially declared to be a “martyr,” and that all five million members in Pakistan of the Ahmadi branch of Islam be expelled from the country. Pakistan Today and AFP and Dawn

Another day, another terror attack.

At least 69 people, mostly women and children, were killed and more than 300 injured in a suicide bombing attack in a park in Lahore, Pakistan, crowded with Christians celebrating Easter Sunday. The suicide bomber was apparently targeting children, as the explosion took place in a children’s playground, near swings and other rides.

JuA has long been one of the terrorist groups under the umbrella group Tehrik-e-Taliban Pakistan (TTP). JuA split off from TTP in the middle of 2014 in a disagreement caused by TTP’s plans to hold peace talks with Pakistan’s government. JuA has rejoined TTP last year, but has also declared allegiance to the so-called Islamic State (IS or ISIS or ISIL or Daesh).

On March 15 of last year, JuA claimed responsibility for suicide bombers at two churches, one Catholic and one Protestant, also in Lahore, killing 15 people and injuring 70.

After last year’s attack, some 4,000 Christians later took to the streets in Lahore, many armed with clubs as they smashed vehicles and attacked a city bus. Two people were accused by the mob of being behind the explosions, and were attacked and killed by the mob. There was also rioting in other Pakistan cities, including Islamabad and Karachi. ( “16-Mar-15 World View — Violent Christian riots follow bombing of two churches in Lahore, Pakistan”)

There have been no reports of similar violence this year, but it is no coincidence that Sunday’s attacks on Christians occurred almost on the one year anniversary of last year’s attacks and subsequent riots. Dawn (Pakistan) and NBC News and Business Standard (India)