Implications of the attempted coup in Turkey 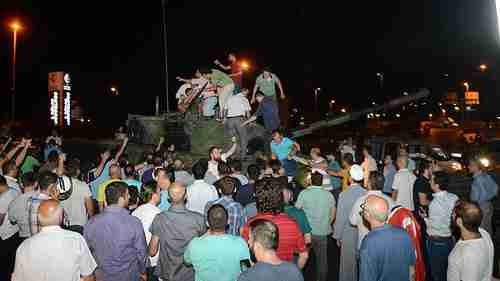 As of this writing on Friday evening ET, it’s thought that the coup has been defeated, but it’s far from certain.

Several analysts have pointed out that it is United States policy only to deal with democratically elected governments, and not with coup governments. This policy was already severely tested after the 2013 coup in Egypt, where the U.S. continued providing military aid to the coup government. The issue of military aid to Turkey would be raised if this coup is successful.

Another flash point is the Bosporus, the narrow body of water that connects the Black Sea and the Mediterranean Sea. Russia’s navy has a substantial Black Sea fleet stationed in Crimea, which Russia invaded and annexed in 2014, and if a Russian ship comes under some kind of attack while traveling through the Bosporus, then Russia’s military might enter Turkey and intervene.

As I’ve written many times during the last ten years or so, based on a Generational Dynamics analysis, in the coming Clash of Civilizations world war, China, Pakistan, and the Sunni Muslim countries would be one side, and India, Iran, the United States and the West would be on the other side. However the coup turns out, this is direction in which Turkey is headed. ( “8-Jul-16 World View — Hard issues prevent full reconciliation between Turkey and Russia”)

As I’m writing this on Friday night ET, it’s not entirely clear who is governing Turkey, since president Recep Tayyip Erdogan is holding a news conference in Istanbul while there’s still fighting in the capital city Ankara. This coup attempt has exposed a great deal of instability within Turkey, and that instability will continue for weeks and months to come. Anadolu (Ankara) and Hurriyet (Ankara)

Reports indicate that Indian security forces prevented tens of thousands of people from attending mosques for Friday Prayers, resulting in anti-India protests and clashes in dozens of places across India-governed Kashmir.

Violent clashes began a week ago, following the death of Burhan Wani, 22, a commander in the separatist militia Hizbul Mujahideen, as I described in “14-Jul-16 World View — Police clashes in India-governed Kashmir kill 36 and leaves thousands injured”.

India has declared Wani to be a “terrorist,” but now Pakistan is referring to Wani as a “martyr of the independence movement.” This is an allusion to the desires of some groups to have an independent Kashmir, but most anti-India groups want Kashmir to be part of Pakistan. At any rate, the “martyr” designation is inflaming the violence in Kashmir.

Pakistan and India, including disputed Kashmir and Jammu, are in a generational Crisis era, 69 years past the massive 1947 genocidal war between Hindus and Sikhs versus Muslims that followed Partition, the partitioning of the Indian subcontinent into India and Pakistan. Being in a generational Crisis era means that the survivors of the last genocidal crisis war are all gone, and the generations in control today have no personal memory of the horrors of that war. This opens the way for a new genocidal war to begin, and it’s possible that the current situation will spiral out of control into that situation. Al Jazeera

The number of terror attacks has been growing. In just the past month, there was a deadly July 7 shooting in Dallas, a massive terror attack Dhaka on July 1, the Istanbul airport attack on June 28, and the mass shooting in Orlando on June 12.

The natural reaction by politicians to the situation is to look for ways to increase their own political power or get money, no matter what the effect on others. This is evident in moronic ideological “solutions to terrorism” that are being proposed. Here are some examples:

The attack in Nice, France makes a mockery of all “solutions.” It was perpetrated by a permanent resident of France, who lived in Nice with a job as a delivery driver. He was known to the police as a petty thief, but not as a terrorist. No one has claimed credit for the attack, so it may have been perpetrated entirely locally. He has an ex-wife and three kids, so that the attack might have been a way of getting revenge against his ex-wife. He comes from a well-to-do family in Tunisia, where his father was speaking to the press. He expressed shock that his son had perpetrated this act. He said that his son was mentally unstable, and that when he was off his meds he would become extremely angry and break things. So the Nice France attack might simply have been perpetrated by a madman.

From the point of view of Generational Dynamics, there is no solution to the terrorism problem. The rise of terrorism is organic, coming from young generations with limited, distorted views of the world. None of the above solutions would reach them. With the worldwide Muslim versus Muslim war growing, there’s going to be more and more “spillover” into the West, and so the number of terrorist attacks will continue to increase. All of the “solutions” listed above only make things worse. AFP and CNN