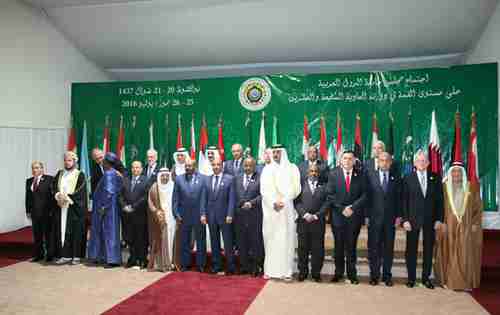 The Arab League summit meeting was supposed to take place in Marrakesh in Morocco on March 27, but at the last minute Morocco refused to host the meeting, saying in a statement:

Amid the lack of important decisions and concrete initiatives to submit to the heads of states, this summit will be just another occasion to approve ordinary resolutions and to pronounce speeches that give a false impression of unity.

Arab leaders cannot confine themselves, once more, to simply analyzing the bitter situation of divergences and divisions without giving decisive responses.

Finally, Mauritania agreed to host the meeting in the capital city Nouakchott. However, this is a small Arab country that rarely hosts conventions, so the summit meeting was held in a big tent.

It was supposed to be a meeting of the leaders of all 22 members, but only a handful of leaders showed up. Egypt’s president Abdel Fattah al-Sisi declined to go, reportedly because he feared an assassination attempt. Saudi Arabia’s king Salman bin Abdulaziz al Saud declined to attend allegedly for health reasons. Other no-shows included the leaders of Tunisia, Jordan, Algeria, and the Palestinian Authority.

There were pressing issues for the Arab League summit to discuss — the rise of ISIS, conflict in Syria, Iraq, Yemen and Libya, sectarian conflicts between Shias and Sunnis, for example — but none of those were given serious deliberation.

In the last few years, millions of Arabs have lost their homes, become displaced and become refugees, while hundreds of thousands of others have been killed. Arab lands have been wracked by bombs, missiles, terrorism, even Sarin gas, and the Arab League is completely unable to cope.

There was one hot issue worth mentioning: Palestinian Authority Foreign Minister Riyad al-Maliki called on the Arab League to help prepare a legal file to sue Britain’s government for issuing the Balfour Declaration in 1917. (See “10-May-16 World View — Arab countries seek to overturn the century old Sykes-Picot agreement”) The Balfour Declaration was an early document justifying the creation of the state of Israel in 1947.

Beyond that, there were some discussions about free-trade zones and such, but the existential questions affecting pan-Arab security were avoided.

So what’s the point of the Arab League? Al-Arabiya (27-Mar) and Gulf News and Brookings and Jerusalem Post

China scored a major diplomatic victory on Monday when the ten-nation Association of Southeast Asian Nations (ASEAN) published a communiqué that contained only a very watered-down statement of what is by far the biggest issue facing ASEAN: The approaching conflict in the South China Sea.

Several nations wanted the communiqué to mention the recent ruling by the Permanent Court of Arbitration in the Hague that eviscerated China’s legal justifications for using military force to annex regions of the South China Sea that had historically belonged to other nations. In one part of the ruling, the Tribunal concluded that China was illegal building an artificial island in part of the exclusive economic zone (EEZ) of the Philippines, and was deliberately taking actions that put the lives of Philippines’ fishermen in danger. ( “13-Jul-16 World View — Philippines humiliates China in harsh Hague Tribunal ruling over South China Sea”)

However Cambodia, a close ally of China, was able to block any mention at all of the Tribunal ruling. According to analysts, Cambodia, Laos, Thailand and to some extent Myanmar (Burma) are becoming increasingly dependent economically on China, and don’t wish to undermine their bilateral relationships with China.

Acceding to China’s demands, the final ASEAN communiqué said only the following:

We remain seriously concerned about recent and ongoing developments and took note of the concerns expressed by some ministers on the land reclamations and escalation of activities in the area, which have eroded trust and confidence, increased tensions and may undermine peace, security and stability in the region.

China issued a statement thanking Cambodia, and saying, “Cambodia’s position was the right one and it would safeguard the unity of ASEAN and cooperation with China.”

Two attackers slit the throat of and killed an 85-year-old priest celebrating Mass in a Catholic church in France in the small northwestern town of Saint-Etienne-du-Rouvray, near Rouen. The attackers gravely injured one of the worshippers present, and then made a video of themselves giving “a sermon in Arabic” in front of the altar. The police shot both attackers dead.

As usual, the Amaq News Agency, the public relations agency for the so-called Islamic State (IS or ISIS or ISIL or Daesh), rushed to claim credit, saying, “The perpetrators of the Normandy church attack are soldiers of the Islamic State who carried out the attack in response to calls to target countries of the Crusader coalition.”

This attack followed several terror attacks in France in recent months, as well as four attacks in the last week in Germany. ( “26-Jul-16 World View — People in Germany are reeling after a week of violence”)

France’s president François Hollande has used relatively mild rhetoric in the past, but now, under pressure from opposition political parties, Hollande declared war on ISIS:

Our country is at war. We are at war externally, in Syria and Iraq, and internally, against radicalization, against individual jihadists. [We are] eradicating the criminal networks, and we will continue.

I also owe you the truth – this war will be long. What it’s aimed at is our democracy. Our democracy is the target and it will be our strength, because our unity is our strength. It’s with perseverance that we will succeed. In that way we will be able to win the war against fanaticism and pain, and we will win this war.

As usual, politicians around the world condemned the attack in strongest terms. AP and EU Observer

Turkey fears that Gulen will flee the United States

Turkish Justice Minister Bekir Bozdag says that “intelligence” shows that Gulen is planning to flee the United States “at any moment” to a country with no extradition treaty with Turkey. “We think that he is searching for countries to run to, he has chosen some countries,” he said, identifying Egypt, Mexico, Canada, Australia and South Africa as places where he could seek refuge. Anadolu (Ankara) and Russia Today