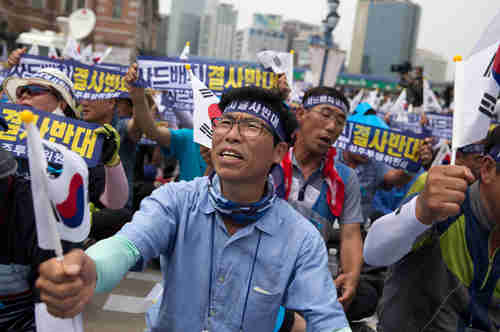 Residents of Seongju, where Thaad is to be deployed, conducting anti-Thaad protests in Seoul (Korea Times)

Earlier this month, the US and South Korea announced the deployment of the Terminal High Altitude Area Defense (THAAD) in South Korea by the end of the year. It is considered to be the most advance anti-missile system available anywhere today because it can blast incoming missiles out of the sky with 100% success rate.

It is part of the Obama administration’s policy of “Pivot To Asia.” Its purpose is to provide both South Korea and Japan with a defense to increasing threats from North Korea of missile attacks, both conventional and nuclear.

Despite request from the US for years, South Korea had resisted deployment of the Thaad system for fear of angering the Chinese. What finally triggered the change of mind was North Korea’s fourth nuclear bomb test on January 6, followed by a long-range missile test on February 7.

North Korea immediately said it would retaliate against South Korea, threatening to launch a retaliatory strike against the THAAD deployment by turning the South “into a sea of fire and a pile of ashes.” It then conducted more tests, launching three missiles into the sea off the east coast of the Korean peninsula.

Russia’s Foreign Ministry said that the Thaad deployment would escalate tensions in the region:

Such actions, no matter how they are explained, very negatively affect global strategic security, adherence to which is so often discussed by Washington. They may also result in escalation of tensions in the region, new difficulties for resolving acute problems of the Korean Peninsula, including the task of its denuclearization.

If Seoul believes that Washington’s missile shield could effectively deter the threats from the North, it is making a strategic mistake.

The truth is that the United States does not care about whether South Korea is safe or not. What it truly wants is an anti-missile system that could guarantee America’s military supremacy in the Asia-Pacific and beyond.

After the United States deployed four THAAD … systems on its own soil and installed two X-Band radars in Japan, South Korea is now the missing piece. That’s why Washington has relentlessly tried to get THAAD into South Korea since 2012.

Once letting THAAD in, Seoul will become one of Washington’s handy tools, losing its autonomy in crafting and executing an independent foreign policy.

China’s military said that it will take “necessary measures” to respond to Thaad, without disclosing what those measures are. Business Insider and VOA and Xinhua (Beijing) and Tass (Moscow) and The Hankyoreh (Seoul)

South Korea’s fears of an attack from North Korea

Both of these incidents were acts of war on the part of North Korea, though South Korea never retaliated, but instead allowed the situation to cool down. But with subsequent nuclear tests and long-range missile tests, many South Koreans believe that the North is just waiting for the appropriate time for a full-scale attack on the south, starting with the extremely vulnerable capital city Seoul, which is only a few miles from the DMZ (the demiliterized zone, separating North and South Korea).

Last year, South Korean media reported that a defector who used to serve in a senior position in the North Korean military revealed that in August 2012, South Korea’s child dictator Kim Jong-un approved a plan for a 7-day asymmetric war against the South, and that Kim has been implementing the plan since then.

The objective is that the North would occupy the entire South Korean territory within seven days, before United States reinforcements could arrive. It also contains a plan to conclude the war within 15 days at most if the North cannot end the war within a week due to resistance by the South and U.S. Forces Korea.

The report lists the following “asymmetric capabilities” that the North would use against the South:

According to a South Korean intelligence official:

The North did thorough analyses of the wars in Iraq and Afghanistan. It concluded that it won’t have a chance if a war drags on. To end it quickly, Pyongyang reached a decision that asymmetric warfare is the only answer, despite the pressures and condemnations of the international community.

On Tuesday, South Korea deported two Korean-American activists after they tried to enter the country for a “peace tour” that would have seen them take part in anti-Thaad protests.

Anti-Thaad protests have been increasing in South Korea, particularly among residents of Seongju, a rural county about 180 miles from Seoul, which is where the Thaad system is to be deployed. Residents feared harmful radiation that could be emitted from the Thaad’s electromagnetic radar waves. In order to defuse these protests, the US military personnel invited South Korean reporters to Guam to inspect a Thaad installation that was already installed, similar to the one being planned for Seongju county. US personnel showed that the radiation levels were far below those permitted by law.

This did not satisfy the residents of Seongju, however, as they pelted the car of prime minister Hwang Kyo-ahn with eggs during his visit to the town and left him stranded in his car for hours.

Other protesters simply claimed that the Thaad deployment would not protect the South from an attack by the North. An in-depth analysis by the U.S.-Korea Institute (38North) at Johns Hopkins University shows that a Thaad deployment, combined with an upgrade of South Korea’s existing Patriot anti-missile system, could protect all of South Korea from North Korean missiles:

The THAAD system intercepts incoming short, medium and intermediate range ballistic missiles above the atmosphere—exoatmospheric intercept—providing an upper-tier layer of defense when operating in conjunction with the lower-tier Patriots. THAAD consists of five primary components: interceptor missiles, launch canisters, AN/TPY-2 phased array radar, a fire-control unit, and support equipment—including a power-generation and cooling units. These can detect and track targets at a range of about 1000 km—assuming the target has a radar-cross section of about 1 m2.

However, it isn’t 100% effective, and a nuclear missile could still pass through, causing many casualties. Hankyoreh (Seoul) and UPI and 38 North (10-Mar-2016) and Lockheed Martin