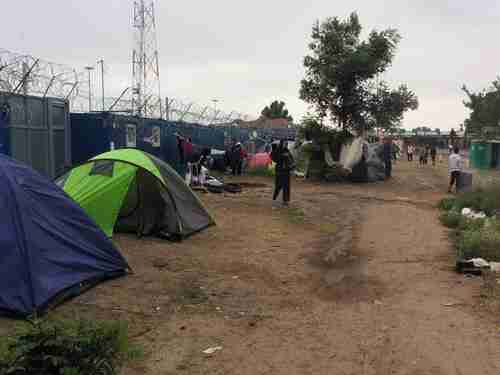 Hungary’s prime minister Viktor Orbán announced that Hungary may erect a second fence along the border with Serbia, parallel to the existing fence. The existing 500 km fence was built hastily last year in September, in defiance of European Union criticisms. It is a four-meter-high razor wire fence that has slowed, but not stopped, the flow of migrants from Serbia. The new “massive” fence, if erected, will use “the most modern technology.”

The new fence will be built if the EU-Turkey migrant deal collapses. Last year, about 400,000 migrants crossed into Hungary from Serbia. That’s been reduced to 18,000 in 2016, because of the EU-Turkey deal, but it’s expected that the massive flood of migrants would return if the deal collapsed.

Orbán announced other steps as well. Hungary will increase the number of border police by 3,000, to 47,000 from 44,000. According to Orbán, “Then if it does not work with nice words, we will have to stop them with force, and we will do so.”

Hungary has already passed a law imposing a three-year prison sentence on those who cross its borders illegally.

The EU government in Brussels has announced a plan to allow a limited number of migrants to enter Europe, and then to resettle them in all 28 countries in the EU, according to a quota system. Orbán has scheduled a referendum for October 2 on whether to accept migrants for resettlement. Balkan Insight and Reuters and Russia Today

Greece has been working to upgrade its overcrowded refugee camps, which have been described as abysmal, where security is lax and mothers with babies are forced to sleep on the ground in makeshift tents. Conditions are particularly bad on the Greek islands in the Aegean Sea — Lesvos, Chios and Samos — with new migrants arriving every day, but unable to travel any further.

Greece has been building new refugee camps to reduce the overcrowding. It’s estimated that there are about 50,000 refugees currently stranded in Greece. During the June 9 to July 30 period, 27,592 refugees and migrants went through the pre-registration process, with 57% of them being men and 43% women, plus thousands of children, both unaccompanied or with a parent. Greek Reporter

The issue of Syrian migrants in EU has rarely been in the news recently, so most people think that the problem is completely solved. Americans in particular have no clue what’s going on in the world beyond Donald Trump’s latest immigration plan or Hillary Clinton’s latest e-mail explanation.

Nonetheless, there is a growing anger in Turkey that could lead to the collapse of the EU-Turkey migrant deal in September, as further negotiations proceed between the two parties. This anger was very evident several days ago, when US vice president Joseph Biden visited Ankara and was snubbed by obviously furious, stone-faced Turkish president Recep Tayyip Erdogan.

Much of Turkey’s anger comes from a lack of support following the July 15 attempted coup combined with a series of horrific terror attacks perpetrated by both the Kurdistan Workers’ Party (PKK) and the so-called Islamic State of Iraq and Syria/Sham/the Levant, IS, ISIS, ISIL, Daesh). These coup threatened Turkey’s entire government, and the terror attacks are much worse than anything that Europe has experienced, and yet from Turkey’s point of view, EU officials have done nothing but criticize Turkey’s attempts to recover from the coup attempt and terror attacks. Turkey also points out that the terror attacks are a threat to all of Europe, as well as Turkey.

With regard to the migrant deal itself, Turkey’s view is that they’ve fulfilled their commitments, but the EU hasn’t. In particular:

Turkey also points out that it has taken in at least 2.7 million Syrian refugees and houses 270,000 in 26 provisional refugee camps with food, health and education services as well as psychological support, vocational education and social activities, and has spent 7 billion euros meeting their needs.

For Europe, the main issue is human rights in Turkey. Even before the July 15 coup, Turkey had already shut down the country’s main opposition media group. ( “6-Mar-16 World View — Turkey’s ‘shameful day for free press’ as government seizes Zaman media”)

Since the coup, Erdogan has conducted a purge that can only be described as breathtaking, arresting thousands of soldiers and policy, and firing thousands more judges, teachers and clerics. In all, 58,000 people have been affected by the purge. ( “22-Jul-16 World View — Turkey’s Erdogan gives himself dictatorial powers, moving Turkey away from the West”)

EU considers Erdogan’s actions to be a major human rights violation, inconsistent with EU law, requiring remediation before the visa liberation can occur. However, even that reason doesn’t excuse the 3 billion euros in aid that hasn’t been paid.

It cannot be that everything that is good for the E.U. is implemented by our side, but Turkey gets nothing in return.

I don’t want to talk about the worst-case scenario. But it’s clear that we either apply all treaties at the same time or we put them all aside.

Negotiations to overcome these differences will begin in September. If no agreement is reached by October, then Turkey could gradually increase the flow of migrants to Greece, and could also refuse to implement other parts of the EU-Turkey deal, such as the “readmission agreement,” which would permit Europe to send migrants not granted asylum back to Turkey. Daily Sabah (Ankara) and Guardian (London) and Washington Post