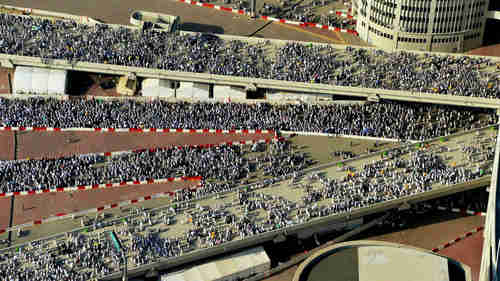 View of the streets of Mina at last year’s Hajj, where thousands of pilgrims were suffocated or trampled to death. (AP)

Up to 2 million Muslims from around the world have arrived in Saudi Arabia for the annual Hajj pilgrimage in Mecca that takes place this year on September 9-14.

The Hajj is Islam’s holiest event, commemorating rituals that date back to the prophet Abraham, and then codified by the prophet Mohammed in the Quran. Each Muslim is required to make a pilgrimage to the Hajj at least once in his lifetime. Last year, about two million Muslims from 180 countries around the world arrived in Saudi Arabia for their once in a lifetime Hajj pilgrimage. Around the same number are expected this year, but with one big exception: Several thousand Muslims from Iran will not be attending.

At last year’s Hajj, two massive crowds of pilgrims converged on the same narrow street just outside of Mecca, in burning hot weather with a temperature of 46 degrees centigrade (= 114 degrees fahrenheit). Over 2000 pilgrims, including several hundred Iranian pilgrims, were suffocated or trampled to death. Although the catastrophe was apparently completely unintentional, Iran’s leaders have strongly condemned Saudi Arabia’s behavior, saying that the crowds should have been better managed before, during and after the incident, and even insinuated that the Saudis had purposely intended for Iranians to be killed.

Relations between Saudi Arabia and Iran took a major step towards increased hostility in January of this year, when Saudi Arabia executed 47 alleged terrorists: 46 Sunnis and one Shia, Mohammad Baqir Nimr al-Nimr, infuriating Iran and Shias because it implied that Shia terrorism is equivalent to Sunni terrorism. Iranian mobs firebombed the Saudi embassy in Tehran, and attacked the consulate in Meshaad. Saudi Arabia and Iran broke diplomatic relations. Other Saudi allies followed suit. In May, Iran banned Iranians from attending the Hajj.

Those who have reduced hajj to a religious-tourist trip and have hidden their enmity and malevolence towards the faithful and revolutionary people of Iran under the name of “politicizing hajj”, are themselves small and puny satans who tremble for fear of jeopardizing the interests of the Great Satan, the U.S.

Saudi rulers, who have obstructed the path of Allah and Masjid ul-Haraam this year and who have blocked the proud and faithful Iranian pilgrims’ path to the Beloved’s House, are disgraced and misguided people who think their survival on the throne of oppression is dependent on defending the arrogant powers of the world, on alliances with Zionism and the U.S. and on fulfilling their demands. And on this path, they do not shy away from any treason. …

The fitna-promoting rulers who by forming and arming wicked takfiri groups, have plunged the world of Islam into civil wars, murdering and injuring the innocent and shed blood in Yemen, Iraq, the Levant, Libya and other countries- the godless politicians who have extended the hand of friendship towards the Zionist regime, have closed their eyes on the Palestinians’ sufferings and heartrending tragedies and have spread their oppression and betrayal to the cities and villages of Bahrain- the irreligious and unconscionable rulers who gave rise to the great tragedy in Mina and in the name of being servants of the two holy places, sacrificed divine sanctity and God’s guests on the day of Eid in Mina and in Masjid ul-Haraam shortly before that- these same people are now claiming the need to avoid politicizing hajj and are accusing others of the great sins that they themselves have committed and caused.

Khamenei went on to call for removing Saudi Arabia as managers of the two holy places (Mecca and Medina) and the Hajj. Guardian (London) and Ayatollah Khamenei’s web site

Saudi Arabia makes a dangerous accusation – that Iranians are ‘not Muslims’

We must understand that these [Iranians] are not Muslims, they are the sons of the Magi, and their hostility to Muslims is old and specifically with the Sunnis and the community.

The phrase “sons of the Magi” refers to Zoroastrianism, the official religion of the Sasanian Empire. This empire, which existed for several centuries before it was defeated by the Arabic Muslim army in 650 AD, is considered by many Iranians today to be the glorious height of Persian civilization, and an important part of Iran’s cultural heritage, even though Iranians today are Shia Muslims, not Zoroastrians.

Iran’s foreign minister Mohammad Javad Zarif responded on his twitter account by saying, in essence, that it’s the Saudis who are not true Muslims:

This is a very dangerous situation, because it goes to the heart of many wars between Sunnis and Shias going back almost to the time of the prophet Mohammed himself. Even if we assume that the leaders of the two countries, Saudi Arabia and Iran, are somehow able to remain cool-headed (a questionable assumption), these two remarks will trigger anger and possibly terrorist acts by extremists in both countries.

The question about who is a “true Muslim” dates back to the period following the death of Mohammed.

The Koran was codified 20-30 years after Mohammed’s death. Some of it had been written down, but many of the texts were based on the testimony of one or two persons who had been acquainted with Mohammed. The selection and interpretation of texts was controlled by a politician (Caliph Uthman) whose clan was to become the Sunnis, and who was in a bitter political and ideological fight with Ali Ibn Abi Talib, the first Shia imam. Although some Muslim scholars claim that the Koran text is unimpeachable, there is nothing in my experience that leads me to believe that Uthman, who was a politician, did not filter all the texts according to his ideological fight with Ali, exclude some texts contrary to his ideology, and change a word here or there based on his ideology.

But most of the disagreements between Sunnis and Shias come about from the selection of the sunnah and hadiths, statements by Mohammed or his companions, respectively, preserved in the memories of people, and passed on from generation to generation, not codified until one or more centuries later. These statements were filtered by multiple politicians, and there is nothing in my experience that leads me to believe that anything beyond a well-defined core set of sunnah can be considered valid.

So when the Saudi cleric accuses the Iranians of being Zoroastrians, he’s accusing them of recognizing a group of sunnah and hadiths that Shia Muslims recognize as valid, but Sunni Muslims do not.

Conversely, when the Iranians criticize the Wahhabis, he’s accusing them of adopting an extremely questionable set of sunnah not recognized by more than a small minority of Sunni Muslims.

So these mutual accusations really go to the deepest core of the disagreement between Sunnis and Shias. As the war of words continues to worsen, we will never be far away from the possibility that one side or the other will translate words into action, as had been the case for thirteen centuries. First Post and Al-Monitor and Exploring Islam and Professor Philip A. Pecorin, CUNY and Amman Message (2006)

President Barack Obama, attending the meeting of the Association of South East Asian Nations (ASEAN), warned China that it must abide by the ruling United Nations Permanent Court of Arbitration (PCA) in the Hague. That ruling eviscerated China’s claims to the South China Sea.

Speaking to the national leaders at the summit, Obama said:

The landmark arbitration ruling in July, which is binding, helped to clarify maritime rights in the region. I recognize this raises tensions but I also look forward to discussing how we can constructively move forward together to lower tensions and promote diplomacy and stability.

China’s foreign ministry spokesman said, “We hope the US can take an objective and just attitude with respect to South China Sea issues.” What China means by “objective” is to ignore the ruling, which took three years to reach, and just do whatever China wants.

The Hague ruling makes it clear that China’s actions are unambiguously and “objectively” illegal. China’s statements have become increasingly furious since the Hague ruling, and it’s feared that the ruled has provoked a surge in emotional nationalism in China that could lead China’s military to start a war. AFP and Straits Times (Singapore)