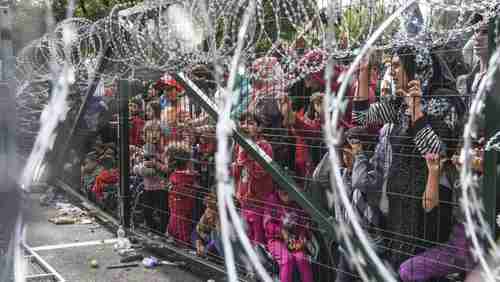 European Council president Donald Tusk said that European leaders need to show that they are “not detached from reality” at the EU summit to be held in Slovakia’s capital city Bratislava on Monday. He was referring to the issues of immigration and free movement of people within Europe, in view of the importance of these issues in the success of the Brexit referendum in Britain, calling for Britain to leave the European Union, and a recent regional election in Germany that handed Angela Merkel a stinging defeat.

The Bratislava summit is not about Brexit per se. It is about bringing back political control of our common future. People are turning against what they perceive as an irrational openness. They see the world around them getting more chaotic. Uncontrolled migration, terrorism, injustices linked to globalization – we have to confront such issues with real political leadership… What must be delivered is a sense of security and order.

We in Europe cannot build a political community only on the concept of mandatory and total openness for everyone. The union also has to be about protection – protection of our freedoms, our security, our quality and way of life. … There is a balance to be restored. I think the union is one the best tools we have to do it.

According to a leaked document authored by Tusk, “People are concerned by a perceived lack of control and fears related to migration, terrorism, and globalization.” Some of the issues that he identified to be discussed at Monday’s summit include:

Luxembourg’s Foreign Minister Jean Asselborn has called for Hungary to be suspended or even expelled from the European Union because of its “massive violation” of EU fundamental values:

Those who, like Hungary, build fences against refugees from war or who violate press freedom and judicial independence should be excluded temporarily, or if necessary forever, from the EU. … [This is] the only way to preserve the cohesion and values of the EU.

“The fence that the Hungarians built to deter refugees is getting longer, higher and more dangerous. Hungary is not far away from issuing orders to open fire on refugees. Anyone who wants to overcome the fence must expect the worst…

Moreover, all this is happening in a country from where hundreds of thousands fled to Europe from the Soviets in 1956.

I think we should view ourselves as like a family in which all members share the same value together and speak to one another when a family member does not accept these common values. We should not exclude a family member.

We’ve known even before that Jean Asselborn is not a serious character. It really shows that he only lives a few kilometers away from Brussels. He wants to exclude Hungary from the EU, but he has already long excluded himself from the circle of politicians who can be taken seriously. Being the good nihilist that he is, he is working tirelessly on destroying European security and culture.