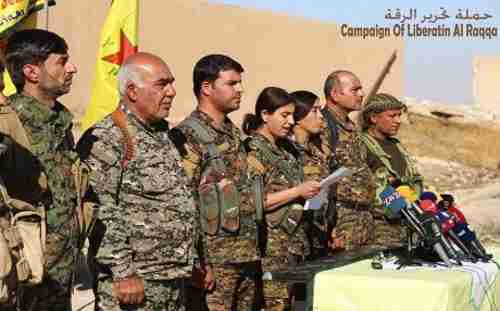 The Kurdish US-backed Syrian Democratic Forces (SDF) on Sunday announced the beginning of an operation to recapture Raqqa from the so-called Islamic State (IS or ISIS or ISIL or Daesh). Raqqa, a city of over 300,000 people, has served as the “capital city” for ISIS.

Different news reports of the operation are calling it by different, though similar names. The names I’ve seen so far are:

The announcement was a surprise, coming so soon after the beginning of the operation to recapture the city of Mosul in Iraq from ISIS. It is possible that the start of the operation was speeded up in order to give ISIS less time to prepare. However, both of the operations, in Raqqa and Mosul, are expected to take months, and to require bloody street to street fighting.

The announcement is also controversial because the principal fighters are Kurds, something opposed by Turkey and by many Arab Sunnis. The Kurds have treated Sunni Arabs harshly in other cities that the Kurds have liberated from ISIS, and have expelled many of the Sunnis, and Raqqa Sunnis are afraid that the same thing will happen to them. This is not an unreasonable fear. The Kurds are known to be trying to form an independent Kurdish state called “Rojava” in northern Syria and Iraq, along the border with Turkey, and so expelling Sunni Arabs from Raqqa would be consistent with this plan.

Turkey on the other hand has launched Operation Euphrates Shield on the other (western) side of the Euphrates River, allied with the Free Syrian Army, to recapture regions around Aleppo from ISIS, and also to block the Kurds from creating Rojava. Turkey is bitterly opposed to the use of Kurdish militias in Syria, since it considers them to be terrorists, allied with the Kurdistan Workers Party (PKK), which is considered a terrorist group by the US and Europe, and has been conduction terrorist bombings in Turkey.

Turkey had wanted to participate in the liberation of Raqqa, and didn’t want the Kurds to participate. The US had to choose between the two, and chose the Kurds. Haaretz (Israel) and Rudaw (Iraqi Kurdistan) and AP

I’ve written frequently that Syria’s Alawite/Shia president Bashar al-Assad is the worst genocidal leader so far in the 21st century, because of his war crimes and his apparent attempted extermination of the Alawite’s historic enemies, the Syrian Sunnis. One web site reader says that al-Assad is a “necessary evil”:

I personally do not like Assad, John, I even wrote a very lengthy article about how the U.S. should interfere to end the war and depose his regime, but my views have since evolved. As evil as Bashar may be, he is a necessary evil to the region — at least for now, especially in the wake of the massive geopolitical changes going on right now.

I understand your argument, but there are two problems with it.

Second, I think it is demonstrable, or very close to it, that the region would be better off without him. The civil war in Syria didn’t spring from nowhere. It was caused when al-Assad unleashed his army and air force against peaceful protesters in 2011. Up to that point, Turkey and Saudi Arabia were friendly with al-Assad. Things really turned around in August 2011, when al-Assad launched a massive military assault on a large, peaceful Palestinian refugee camp in Latakia, filled with tens of thousands of women and children Palestinians. That’s what led to the geopolitical disaster you’re alluding to.

Since then, Sunnis have been fighting Shia/Alawite Assad on a sectarian basis. The Sunni groups fighting Assad can be split into rough categories:

Since 2011, The rise of Sunni groups fighting al-Assad has brought in countervailing sectarian forces from Iran and Russia. This has turned the Syrian “civil war” into a proxy war.

This is a generational Awakening era for Syria, like America in the 1960s when people were still living in the shadow of WW II and did not want another war. In Syria today, the war was begun by al-Assad in 2011 by attacking peaceful protesters, and is continuing today because of unceasing attacks by al-Assad, Russia, Hezbollah and Iran — and even so, al-Assad’s army is struggling for survival.

So I claim that it is demonstrable that if al-Assad were replaced by a technocrat, then the war would fizzle. Syria would once again get along with Turkey and Saudi Arabia. The Syrians, the FSA and al-Nusra, would then unite and expel ISIS. This is what happened in Iraq during the “surge” in 2007, when the Iraqi Sunnis united and expelled foreign fighters from al-Qaeda in Iraq. Millions of people in Jordan, Lebanon, Iraq, Turkey, and even Europe could then return to their homes in Syria.

So I disagree with you. Al-Assad is not a “necessary evil.” He’s an extremely destructive evil. Bashar al-Assad is the first major genocidal leader of the 21st century, and the most evil leader so far in the 21st century.