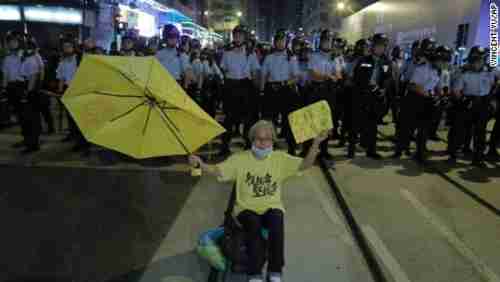 Mainland China has preempted Hong Kong’s courts by ordering Hong Kong to “reinterpret” its laws so that the two pro-democracy “localists” who changed the wording of their oath of office will not be able to enter the legislature by taking the oath again.

China suffered a stinging defeat when a September 4 election gave pro-democracy or “localist” candidates 27 out of 70 seats in the Legislative Council of Hong Kong (LegCo). Two of those elected, Yau Wai-ching and Sixtus Baggio Leung Chun-hang, from “Youngspiration,” went beyond “pro-democracy” to advocating full Hong Kong independence from China. When they took their oaths of office on October 12, they changed the wording of the official oath of office to express support for Hong Kong’s independence. They also referred to China as “Chee-na,” mimicking the derogatory Shina used by Japan during the second world war. The Hong Kong courts were asked to decide whether the two should be permitted to re-take their oaths, or be completely disqualified from entering LegCo.

On Monday, Beijing’s National People’s Congress (NPC) Standing Committee “reinterpreted” Hong Kong laws, essentially ordering the Hong Kong government to disqualify the two, and possibly others who have ever supported independence. The oath must be taken “sincerely and solemnly,” and must “bear allegiance to the Hong Kong Special Administrative Region of the People’ s Republic of China.”

In addition, China may revive a long-dormant national security law that was dropped in the past. That law would provide legislation covering secession, subversion, theft of state secrets, and activities of foreign political organizations. Xinhua and South China Morning Post (Hong Kong) and Hong Kong Free Press and Bloomberg

Police in Hong Kong used pepper spray on Sunday to disperse 8,000 to 10,000 demonstrators protesting against the expected decision by Beijing to “reinterpret” Hong Kong laws. Some of the demonstrators used umbrellas to protect themselves from the pepper spray, as they had done during the 2014 demonstrations that launched the “umbrella revolution.”

Hong Kong is deploying some 2,000 police officers around the clock this week, in preparation for further protests.

Several commentators have pointed out that Hong Kong politics has become more confrontational. In the past, when institutions were led by survivors of the bloody Communist Revolution, protestors saw peaceful protest as the best way to bring about change.

However, as survivor generations have died off, and radical new generations have come of age, protestors are argument that peaceful protests have achieved nothing, and that more confrontational tactics are required.

Advice on traveling to China

Are you planning a trip to China? A number of Holly pros offer the following advice: