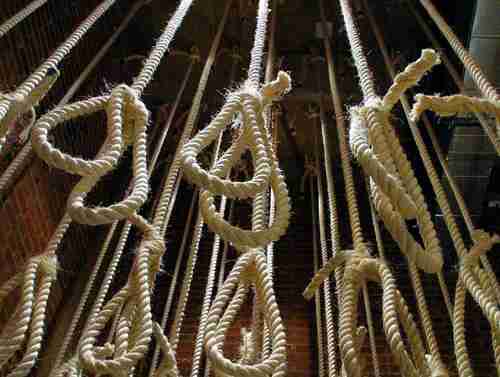 Each week, up to 50 people at the Saydnaya prison were taken out of their prison cells for arbitrary trials, beaten, then hanged (AFP)

Just when you think you know all the depraved atrocities that Syria’s president Bashar al-Assad has committed, new evidence leaks out that shows even more grotesque actions by this psychopathic killer and war criminal.

These actions began in 2011 when there were thousands of people peacefully demonstrating against al-Assad. They took place in secret in Saydnaya Prison, a facility that al-Assad turned into a “human slaughterhouse,” according to Amnesty International, based on interviews with 84 people, including 31 former inmates, four former guards, three former judges and three doctors. Thousands of these peaceful demonstrators were brought to Saydnaya for extreme torture and execution.

The prisoners were people who were perceived to oppose the government in some way. They came from all sectors of Syrian society. Many are demonstrators, long-time political dissidents, human rights defenders, journalists, doctors, humanitarian aid workers, and students.

According to one former inmate, they were tortured from the moment they arrived:

You are thrown to the ground and they use different instruments for the beatings: electric cables with exposed copper wire ends — they have little hooks so they take a part of your skin — normal electric cables, plastic water pipes of different sizes and metal bars. Also they have created what they call the “tank belt”, which is made out of tire that has been cut into strips. … They make a very specific sound; it sounds like a small explosion. I was blindfolded the whole time, but I would try to see somehow. All you see is blood: your own blood, the blood of others. After one hit, you lose your sense of what is happening. You’re in shock. But then the pain comes.

Prisoners are stripped naked and thrown into cells for months. Prisoners were severely beaten regularly. Prisoners were forced to rape each other. There were starved and given little food and water. The only escape was death, with regular mass hangings of up to 50 at a time. At least 17,723 people were killed in government custody between March 2011 and December 2015, an average of 300 deaths each month.

As far as is known, these actions are still going on today, in Saydnaya and other Syria prisons.

This is not the first time al-Assad’s horrors have leaked out into the public. In 2014, an al-Assad defector supplied 55,000 photos of about 11,000 men whom al-Assad had tortured using electrocution, eye-gouging, strangulation, starvation, and beating on prisoners on a massive “industrial strength” scale. Al-Assad was so pleased and proud of this torture that he made sure each act was photographed.

Throughout my lifetime, I have heard people describe the Holocaust and say, “Never again!” But al-Assad is a man who gets obvious pleasure from gouging out people’s eyes or pulling out their fingernails, or sending missiles into school dormitories to kill children, or dropping barrel bombs laden with metal, chlorine, ammonia, phosphorous and chemical weapons on civilian neighborhoods, or using Sarin gas to kill large groups of people. He considers all Sunni Muslims to be cockroaches to be exterminated. Bashar al-Assad is the greatest genocidal monster in today’s world, comparable to Hitler, Pol Pot, Mao Zedong and Stalin from the last century. There is no mass weapon of destruction, nor any gruesome form of torture, that he won’t use to satisfy his psychopathy. Amnesty International and CNN and Vox

The destruction of East Aleppo was supposed to be the shock and awe that brought Syria’s civil war to an end, but that has not happened yet. Tens of thousands of residents of Aleppo have fled to Idlib, which is now being controlled by a combination of “moderate” anti-Assad rebels, fighters from the so-called Islamic State (IS or ISIS or ISIL or Daesh), and fighters from Jabhat al-Nusra (al-Nusra Front, now Jabhat Fateh al-Sham or JFS).

There is also continued fighting in northern Syria, led by Turkey’s Operation Euphrates Shield. The fighting is now centered on the city of al-Bab. At the beginning of the operation in August of last year, the main fighters were the Free Syrian Army (FSA) of “moderate” anti-Assad rebels. But now in al-Bab, it’s elite Turkish army fighters leading the effort, supported by Turkish fighter jets.

This situation is a time bomb for several reasons:

BBC and AP and Al Jazeera