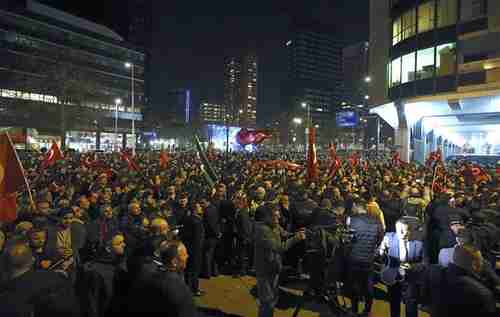 Demonstrators outside the Turkish consulate in Rotterdam on Saturday evening (Reuters)

Dutch riot police on horseback used batons and water cannon to disperse hundreds of pro-Turkey demonstrators at the Turkish consulate in Rotterdam, the Netherlands, on Saturday evening, after two ministers in Turkey’s government were blocked from entering the Netherlands.

The clashes between protesters and police are part of an escalating crisis in relations between Turkey and the European Union that has been growing for the three weeks.

On Saturday, the Netherlands refused to permit Turkey’s foreign minister Mevlut Cavusoglu to land in the country, and forced his plane to turn back to Istanbul. Cavusoglu was planning to address a rally in Rotterdam of the Turkish citizens living in the Netherlands to campaign for approval of a referendum vote that will take place in Turkey on April 16. The Netherlands action comes just days before an election in that country is expected to show significant gains for the anti-Islam leader of the Freedom Party, Geert Wilders, who campaigned against the Turkish minister’s visit.

So they cancelled it due to security concerns, what, so is the minister a terrorist? We will give them the response they deserve…

We have received many supportive messages from the Netherlands, saying they don’t agree with their government’s racist, fascist policies.

Upon hearing that Cavusoglu had been forced to turn back, Turkey’s Minister of Family and Social Policies Fatma Betul Sayan Kaya, who had been at a meeting in Germany, drove overland to Rotterdam to speak to demonstrators. She was stopped by Dutch police and forced to return back across the border to Germany. Through her twitter account, Kaya condemned Dutch authorities in “the name of all our citizens,” and said, “The whole world must take action against this fascist practice! Such a treatment against a woman minister cannot be accepted.”

The action against Kaya triggered violence on the part of the hundreds of protesters at the Turkish consulate in Rotterdam, throwing bottles and mobbing police vehicles. AP

Turkey’s crisis with Germany, Austria, Netherlands has been escalating

Tensions between Turkey and the European Union have been growing for some time, but they began to reach a crisis point last weekend when two German cities, Cologne and Gaggenau, canceled March 5 rallies that Turkish citizens had planned in support of Turkey’s government and the April 16 referendum. This was after Austria’s government had previously said that Turkey’s president Recep Tayyip Erdogan would not be permitted hold rallies in Austria. There are some 400,000 Turks living in the Netherlands, and 300,000 living in Austria, many with the right to vote in Turkey’s elections.

Turkey’s politicians are already furious because EU politicians are always lecturing them about human rights. This has been particularly true since the failed coup attempt that occurred on July 15 of last year, after which Turkey’s government has fired or arrested over 100,000 people suspected of involvement in the coup with virtually no evidence. This has included the arrest of a number of journalists, including the February 27 arrest of Turkish-German journalist Deniz Yücel, who writes for the German newspaper Die Welt.

So, from Turkey’s point of view, the EU is always lecturing Turkey about journalistic freedom, freedom of speech and human rights, and now EU politicians were blocking perfectly legal rallies begin held in Germany.

A furious Erdogan lashed out:

One cannot even comment on such utterances, they are not justifiable. Comparisons with Nazis always just lead to one thing — to belittle those crimes.

Merkel tried to calm things down with Erdogan this week, but the crisis sharply escalated again on Saturday when the Netherlands blocked Turkey’s foreign minister Mevlut Cavusoglu from attending a rally by Turkish citizens in Rotterdam.

They don’t know anything about politics or international diplomacy. They are very nervous, and they are cowards. They are Nazi remnants. They are Fascists.

Netherland’s prime minister Mark Rutte called Erdogan’s words a “crazy remark,” and said, “I understand they are angry but this is of course way out of line.” BBC (27-Feb) and Hurriyet (Istanbul, 28-Feb) and CNN (6-Mar) and BBC

On Saturday, Turkey’s foreign minister Mevlut Cavusoglu, said on Saturday that all deals with the European Union, including the EU-Turkey migrant deal, would be jeopardized if the EU failed to implement its commitment to visa-free travel for Turks in Europe’s Schengen Zone. As part of the original agreement, the visa liberalization commitment was scheduled to be implemented in June of last year, but the EU has continued to postpone it.

Cavusoglu said that Turkey would present a final text to the EU “and either it will all be canceled, including the visa liberalization and migrant deal, or it will all be implemented.”

Turkish officials have made this threat before, but the events of the last week have so infuriated both sides that the threat is now more likely to be carried out than before.

There’s a completely separate threat to the EU-Turkey migrant deal, and this one is coming from Greece.

Greece’s highest administrative court, the Greek Council of State, will rule later this month on whether Turkey meets the criteria to be a “safe country” for refugees — whether refugees can live safely in Turkey. If the court rules that Turkey is not a “safe country,” it would have far-reaching consequences. It would make it illegal for the EU to send rejected asylum-seekers back to Turkey. Furthermore, it would open the door to allowing the three million Syrian refugees already living in Turkey to come to Europe.

As regular readers know, Generational Dynamics predicts that in the coming Clash of Civilizations world war, China will be allied with Pakistan and the Sunni Muslim countries, including Turkey, while the West will be allied with India, Russia and Iran. A recurring discussion is over the question of how the European countries will align themselves: will they ally as a unit, or will they split and fight among themselves, as they have in every other war in history? The continuing crisis with Turkey may provide some clarification. Reuters and Eur Activ and Middle East Eye