Taiwan says it must defend against increasingly threatening China 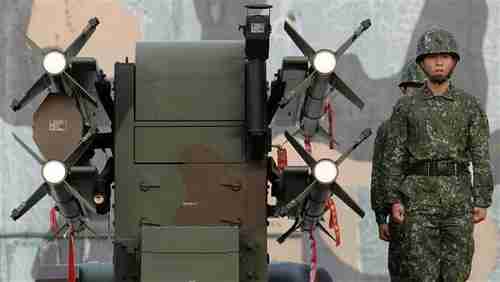 A major Taiwan government defense report, the “2017 Quadrennial Defense Review” (QDR), says that China’s accelerated military development and recent activity by its military aircraft and ships around Taiwan pose an increased threat to the self-ruled island. This is the third QDR published by Taiwan, with the first two published in 2009 and 2013, respectively.

The recent activity of Chinese jets and ships around Taiwan shows the continued rise in [China’s] military threat capabilities. In addition to posing a military threat to our country, it also has a negative impact on regional stability…

With the rapid growth of China’s defense budget, the People’s Liberation Army has made considerable progress to modernize and reform its military. It has the ability to blockade Taiwan, launch combined operations, and seize and hold Taiwan’s outlying islands…

[If China invades, Taiwan will] resist enemy troops at their home bases, strike them at sea, destroy them as they approach Taiwan’s coastlines and annihilate them on the beaches.

Taiwan plans to acquire stealth jet fighters as a deterrent. However, the report acknowledges that Taiwan cannot compete with China’s army, in view of its explosive growth in power and equipment, and so Taiwan must look for asymmetric ways to provide a defense, using a “multi-deterrence” strategy that presents the enemy with multiple dilemmas. According to the report, Taiwan will boost its cyberwarfare capabilities, ensure the security of its command-control and information infrastructure, and strengthen joint counterattack readiness. Reuters and Taipei Times and Straits Times (Singapore) and Russia Today

No matter how the situation on the island may evolve, the fraternal bond between the two sides cannot be severed and will not be able to change history or the fact that both sides belong to one and the same China.

A highly nationalistic editorial appeared in China’s state-run Global Times explaining that Taiwan’s QDR has no military value, because China’s military is so strong that even with support of the United States, Taiwan’s military have no will to fight:

The “multi-deterrence” strategy aims to force the enemy into multi-dilemmas. As ambitious as it is, it has almost no actual military value.

With the development of military strength on the Chinese mainland, the will of Taiwan’s military to confront their mainland counterparts has almost collapsed. No soldiers believe Taiwan forces are capable to defend the island if the People’s Liberation Army (PLA) launches a comprehensive offensive against Taiwan.

The new QDR claims that the PLA is capable of seizing Taiwan’s offshore islands. But isn’t it an easy thing for the PLA to seize the whole island of Taiwan?

The Taiwan military cannot match the present-day PLA. The mainland’s military budget is more than 10 times that of Taiwan, and the PLA has superior strategic tools and systemic combat capabilities that their Taiwan counterparts don’t have. …

Taiwan has taken deterring the mainland as a key strategy, and constantly changed its deterrence tactics. But there is no need for the island to deter the mainland, as the mainland cherishes peace and won’t resort to force unless it’s absolutely necessary. If Taiwan is controlled by radial pro-independence forces, Taiwan’s military, even with the help of the main US military forces, will not be able to deter the mainland.

Therefore, the most important thing for Taiwan is not to provoke the one-China policy. This is the correct political way to protect the island’s security.

The last paragraph refers to China’s “anti-secession law,” which China passed in 2005. The law says that China will invade Taiwan even if there’s no more than talk of independence. Last year’s election of Taiwan’s president Tsai Ing-wen, of the Democratic Progressive Party that has historically favored independence, and then last year’s phone call between Tsai and candidate Donald Trump have enormously increased tensions. Arguably, the necessary conditions to trigger the anti-secession law have already occurred.

Nonetheless, the above editorial is typical of the really stupid things that people say during a generational Crisis era. China has been illegally annexing other countries’ territories in the South China Sea, the kind of thing that Adolf Hitler did, and nobody is confronting China. In 1988, China easily won a naval war with Vietnam in the Spratly Islands. The Chinese people no longer have any memory of being defeated by an enemy, as they were by the Japanese in World War II until America saved them. So with decades of mostly military success, with a belief that other countries do not have the will to fight, and with an explosively growing military capability, many in China believe that China’s military can do anything it wants with impunity. This is the kind of mistake that leads to generational crisis wars, and it’s a historic mistake by the Chinese that will lead to disaster for China and disaster for everyone else as well. Global Times

Taiwan’s government responded to China’s threats, but the response was just as delusional. Taiwan’s Lt. Gen. Chiang Chen-chung noted that the Chinese army base closet to Taiwan under China’s Eastern Theater Command is only 250 kilometers away from the coastline of Taiwan, with the most distant 1,380 km away from Taiwan. Chiang said that China’s military had the ability to strike China’s army bases with missiles. The implication was that China wouldn’t attack Taiwan, because that would risk having their bases attacked.

Taiwan’s former deputy defense minister Lin Chong-pin said that it was pointless to try to compete with China’s military, and so the military should focus on urban guerilla warfare and adopt a “war of paralysis” against the Chinese military. “It will be too expensive, too messy, and any bloodshed would do great damage to China’s claim of peaceful reunification… that would be a very effective deterrent.”

So we have two delusional populations headed for war with each other. That’s how history’s greatest catastrophes begin. China Post (Taiwan) and Taipei Times and Straits Times (Singapore)

A Chinese Communist Party official is being quoted by Chinese media as saying that China will begin building permanent structures in the Scarborough Shoal and other South China Sea islands, and that this work will be one of the government’s top priorities in 2017.

Last year, the United Nations Permanent Court of Arbitration handed China a humiliating defeat by declaring its activities in the South China Sea to be illegal. Nonetheless, China has continued annexing other countries’ regions and building illegal artificial islands and military bases.

Last year, President Barack Obama warned China’s President Xi Jinping last year against building an artificial island at Scarborough Shoal. A Chinese military base on Scarborough Shoal would put Chinese fighter jets and missiles within easy striking distance of US forces that are stationed in the Philippines, as well as the Philippines’ own forces. The shoal also commands the northeast exit of the sea, so a Chinese military outpost there could stop other countries’ navies from traveling through the South China Sea.

Well, to nobody’s real surprise, China is now preparing to build an “environment monitoring station” on Scarborough Shoal. And nobody really believes that it’s purpose is just to monitor the environment.

During his Senate confirmation hearing for secretary of state, Rex Tillerson said that China’s access to its artificial islands should not be allowed.

So now, as continues to militarize the South China Sea in preparation for war, we’ll have to see whether the United States follows through on its promise to block China’s access to Scarborough Shoal and its artificial islands, which will lead to a world war, or whether the United States will just stand by and let China continue to militarize the South China Sea with impunity, which will also lead to a world war. That’s a variation of what’s known as “Hobson’s Choice.” AP