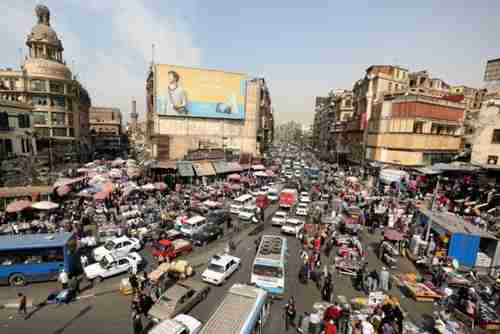 Cairo, the capital city of Egypt, already has a population of 22.8 million people, and is set to grow by another 500,000 in 2017, making it the world’s fastest growing city.

Egypt as a whole has a natural population growth of 2.4% per year, double the average of other developing countries. Its current population is 92 million.

The “good” economic news is that Egypt’s surging population growth has made the country the world’s fastest-growing real estate market, with an expected annual expansion of 18.9% mortgaged households in 2017 alone. The world’s second and third fastest growing real estate markets are Algeria and Nigeria, respectively. Africa and the Middle East are home finance hotspots, due to their large and growing populations seeking infrastructure and residential units to resolve urban housing shortages.

The “bad” economic news is that Egypt’s surging population growth, combined with overdevelopment of the Nile Delta, and the looming completion of Ethiopia’s Renaissance Dam, which could affect the flow of water in the Nile River, will cause Egypt to face critical countrywide shortages of freshwater and food by the year 2025.

According to a study by the Geological Society of America:

About 70% of water flow reaching Egypt is derived from the Blue Nile and Atbara River, both sourced in Ethiopia. Over the past 200 years, rapidly increasing human activity has seriously altered flow conditions of the Nile. Emplacement in Egypt of barrages in the 1800s, construction the Aswan Low Dam in 1902, and the Aswan High Dam in 1965 has since altered water flow and distribution of nourishing organic-rich soil in the delta.

Egypt’s population has recently swelled rapidly to about 90 million, with most living in the soil-rich Lower Nile Valley and Delta. These two areas comprise only about 3.5% of Egypt’s total area, the remainder being mostly sandy desert. Due to much-intensified human impact, the delta no longer functions as a naturally expanding fluvial-coastal center. Less than 10% of Nile water now reaches the sea, and most of the nutrient-rich sediment is trapped in the delta by a dense canal and irrigation system…

[Furthermore,] saline intrusion is now reaching agricultural terrains in central delta sectors — the coastal 20 to 40 km of delta surface will be underwater by the end of this century.

There is an additional looming danger of considerable importance: Ethiopia, itself energy-poor and undergoing drought conditions, is shortly (in 2017) to complete construction of the largest hydro-electric dam in Africa, its Grand Ethiopian Renaissance Dam (GERD). The large reservoir behind the dam is to be filled over a three- to five-year or longer period, during which it is expected that the amount of Nile flow to the Sudan and Egypt and its delta will be substantially reduced.

This down-river decrease of Nile fresh water will produce grave conditions. The pre-GERD Nile flow now barely supplies 97% of Egypt’s present water needs with only 660 cubic meters per person, one of the world’s lowest annual per capita water shares.

The report concludes that Egypt will have critical countrywide fresh water and food shortages by 2025. Egyptian Streets and Reuters and Geological Society of America

Egypt must import almost all medicines or their components, which makes the cost of these medicines dependent on the foreign exchange rate of the Egyptian pound currency versus the US dollar. After Egypt floated the pound in November, inflation has been soaring, and the inflation rate jumped to a record 31.7% in February. The result is that import prices of medicines have soared as well, with drug prices now out of reach for many families.

Some medicines are price-controlled by the government, but this has created shortages and hoarding. So even if a family can afford the cost of a drug, in many cases it’s completely unavailable.

In particular, this has resulted in a shortage not only of contraceptive pills, but of all birth control methods in general.

However, there is also a social culture in Egypt that encourages families to have many children. According to surveys, About 90 percent of Egyptian women and 87 percent of men between the ages of 15 and 49 believe that contraceptives should only be used after the first child.

An article quotes a poor Cairo resident of being pressured to have more children, after he’d already had four. After being taunted by his neighbors, insulting his manhood, he persuaded his wife to go off birth control. Over the next four years, they had three more children. He says:

He regrets these decisions, however, as his small salary is barely enough to feed his family, which subsists on stewed fava beans and bread, and his children can’t afford to go to school.

A 2015 study by Egypt’s Ministry of Health and Population found the following: