On Thursday, following the publication of gruesome images of the victims of an apparent chemical attack on civilians, reports surfaced that President Donald Trump ordered a missile attack on a base in Syria.

The reports follows a week in which President Trump responded to an alleged chemical weapons attack by dictator Bashar al-Assad by noting it “crossed many red lines” and had changed his thinking on Syria.

The President refused to elaborate earlier in the week on how he would approach the six-year-old civil war and the sprawling web of armed factions fighting each other within Syria’s borders, likely in part due to the complex nature of the fighting. The Syrian Civil War is not being fought solely between Assad’s soldiers and anti-Assad rebels, but by a diverse cast of characters staking their territorial claims in isolated regions of the country, sometimes failing to interact with each other at all, and their patron nations looking to stake a claim in the heart of the Middle East.

At least ten major armed groups, including the armies of at least five sovereign nations, have entered the fray in Syria. 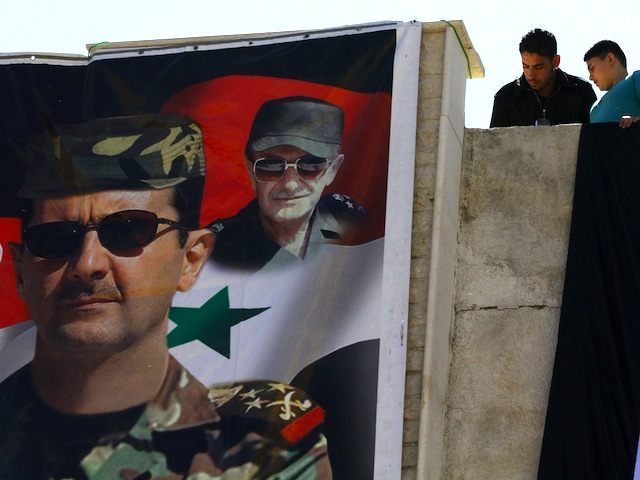 The Syrian army is the official sovereign military of the country, run by dictator Bashar al-Assad. Experts began calling into question the military’s ability to handle a bonafide war as early as in 2003, when the Iraq War made some question whether the early Bush administration would see Assad as another Saddam Hussein. By 2011, when the Syrian Civil War began, it appeared unlikely that Assad would remain in power for much longer, with reports of army desertions by the tens of thousands.

An astute political mind, Assad reached out to international allies in Russia and Iran for help. While the United States poured its efforts into weakening Assad enemies like the Islamic State, Russia and Iran focused their help on subduing anti-Assad rebels in regions far from ISIS control. By the collapse of Aleppo in mid-2016, Assad appeared to be an unchangeable political reality in Syria – those who wanted him removed also feared creating another Libya, a terra nullis cradle for global jihad.

Assad, accused of using chemical weapons against civilians on multiple occasions, promised “no pause” in such attacks following the collapse of Aleppo in September. The next month, the United Nations accused Assad of bombing a school in Idlib, a rebel-held province. Today, Idlib is home to the chemical bombing that President Trump asserted has changed his thinking on intervention in the country.

Assad enjoys the support of Shiites and Christians domestically, who view him as a buffer to Sunni jihadist forces seeking to exterminate them. 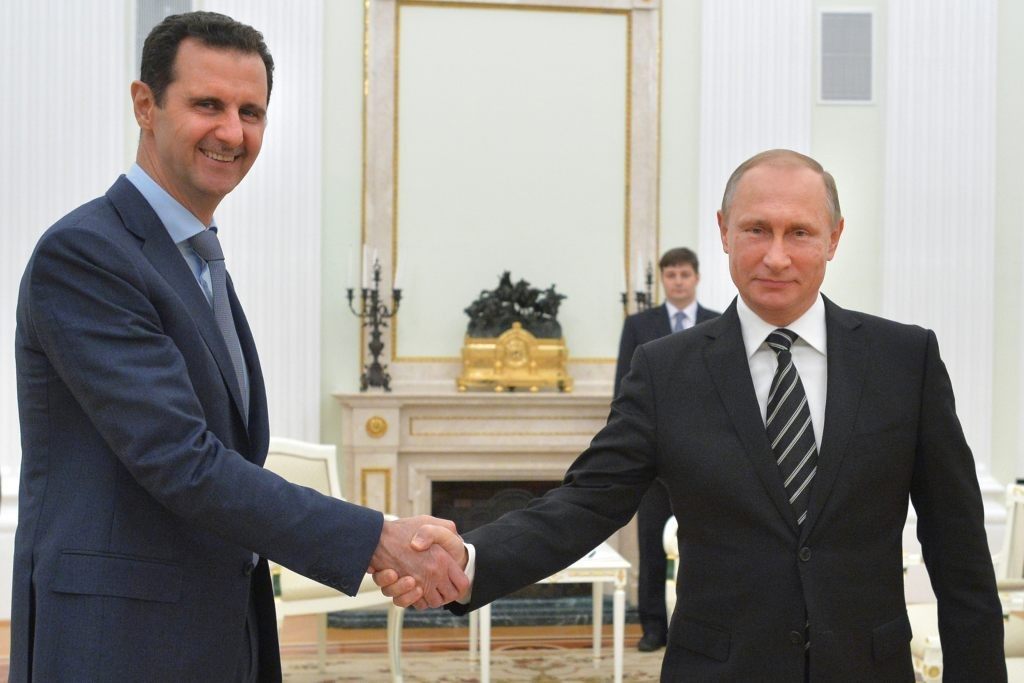 ince the early days of the Syrian Civil War, Russia made its support for Assad clear as a reliable veto on any UN resolutions condemning his government’s human rights abuses against its people. As the Syrian army began to lose ground to both rebel groups and the Islamic State, however, Russia’s involvement in preserving the status quo in Damascus grew, peaking with President Vladimir Putin eclipsing American counterpart Barack Obama by getting Assad to agree to relinquish his chemical weapons arsenal.

Russia later sent troops into Syria claiming its troops would be fighting against the Islamic State, not necessarily in defense of Assad. Russia’s aid in securing the collapse of Aleppo, a northern city with no known Islamic State presence, raised suspicions that Russia’s stated intentions were false. That plenty of evidence suggests Assad never gave up those chemical weapons added to the suspicion Russia involved itself not only to expand its international influence but to secure Assad’s leadership.

In addition to aiding Assad, the Russian military cooperates with the Syrian YPG forces (see below), placing them within “hand-grenade range” of American troops doing the same. 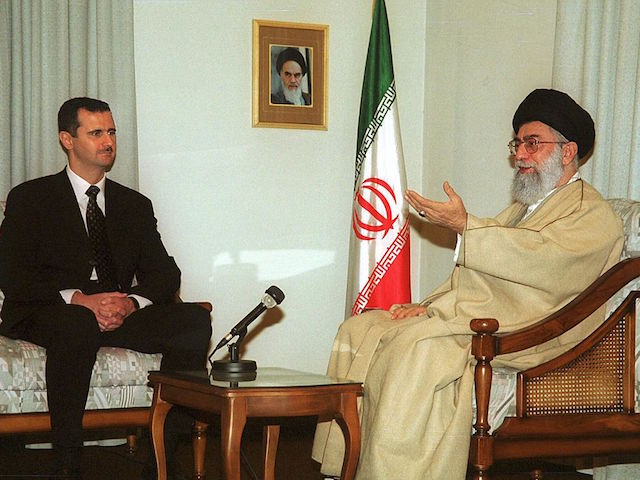 As the largest Shiite nation in the world, Iran forged a natural alliance with Assad and his father, Syrian head of state Hafez al-Assad, both Alawite Shiite Muslims. As a longtime ally of the regime in Tehran, the terrorist organization Hezbollah has also involved itself in Syria, aiding the Assad military. Hezbollah has not only vowed to defend Assad, but to “continue to bear our great responsibilities of jihad there,” according to leader Hassan Nasrallah.

Iran, meanwhile, has declared Syria part of its growing empire. Iranian legislators have called Damascus one of “four capitals” of the “Islamic Revolution” in addition to Tehran, along with Sanaa, Yemen; Baghdad, Iraq; and Beirut, Lebanon.

Iran has been using the Syrian Civil War as a training camp for rookie soldiers and a dumping ground for Afghan refugees, forced to fight in Syria in exchange for small salaries or the promise of residence for their families in Iran. 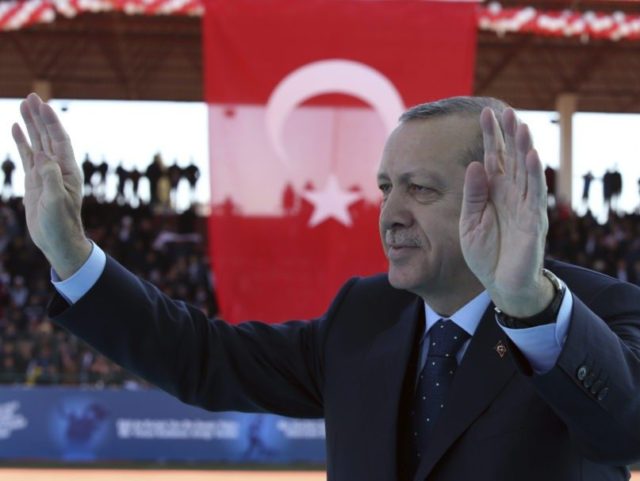 The Turkish government is the latest sovereign government to parachute into the fray. Turkey launched Operation Euphrates Shield in August 2016, allegedly to keep the Kurdish YPG (see below) from controlling more territory west of the Euphrates River. Yet Turkey’s motives for entering Syria have never been completely clear. Following the government’s claim that the move was meant against the YPG, Islamist President Recep Tayyip Erdogan said Turkish troops were present in the country “to end the rule of the tyrant al-Assad who terrorizes with state terror,” a remark the Russian government found, to put it mildly, baffling.

The Turkish government has since walked back Assad’s comments, claiming Turkey entered Syria to fight the Islamic State, a stated goal that has nothing to do with Assad or the YPG. It has also since ended Euphrates Shield, but not withdrawn its troops, leaving open the question of what Ankara will do next. 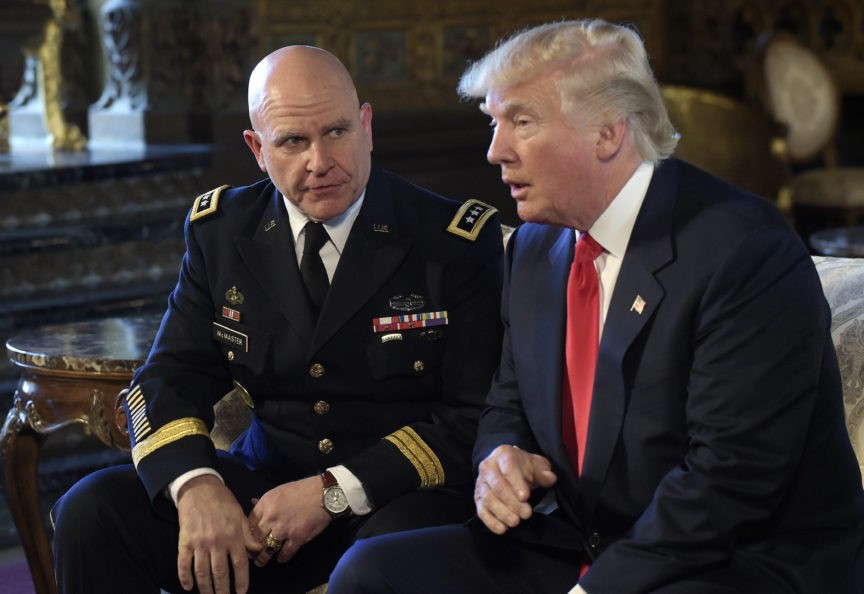 Contrary to those who suggest a Trump administration in Syria would be the first major commitment of American troops in the country, the United States has been involved in the Syrian Civil War for years. Reports suggest that the CIA had begun sending weapons to anti-Assad rebels as early as 2012, even as Hillary Clinton referred to Assad as a “reformer” a year prior.

Most Obama administration involvement in Syria was on the part of the Free Syrian Army (see below), attempting to “vet” anti-Assad rebels to ensure that no American weapons fell in the hands of jihadists. Obama’s vetting program resulted in Free Syrian Army defectors abandoning the group en masse, feeling too small and vulnerable to fight alone, for groups such as al-Qaeda and the Nusra Front. By then, however, the U.S. was also working with the Kurdish YPG in the fight against the Islamic State (the YPG and Free Syrian Army largely operate in different parts of Syria).

Trump’s statements on Wednesday, however, following Assad’s allegedly chemical weapons attack on civilians in Idlib, raises questions regarding a policy shift from focusing on ISIS to actively working to remove Assad. 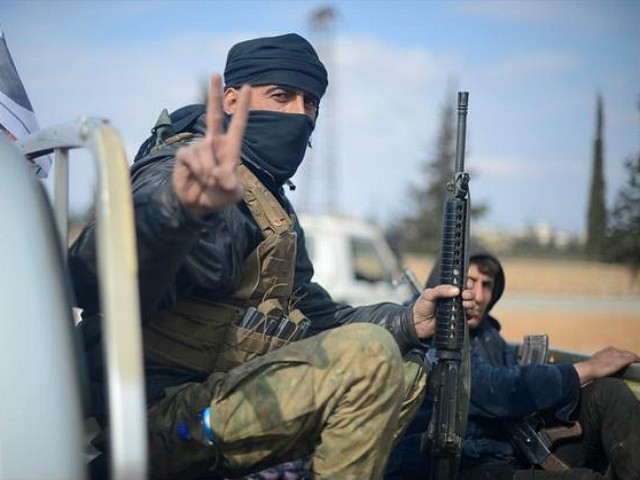 The FSA, a coalition of anti-Assad, mostly Sunni rebels, has been the subject of much controversy in the American telling of the Syrian Civil War. President Barack Obama bet on the FSA as the most respectable of the anti-Assad militias, imposing a “vetting” process on the rebels to ensure that American weaponry did not fall into the hands of jihadist groups. The result of that vetting process was a significantly smaller FSA, a combination of members failing the vetting or simply deserting as they felt the group dwindling. By 2015, the Pentagon admitted that a number of “vetted” FSA members had handed their weapons over to al-Qaeda, the Nusra Front, or merely joined their ranks.

What is left of the FSA now relies on Turkey for its support, largely politically but with some reported military aid. The United States has largely shifted the focus of its support to the YPG. 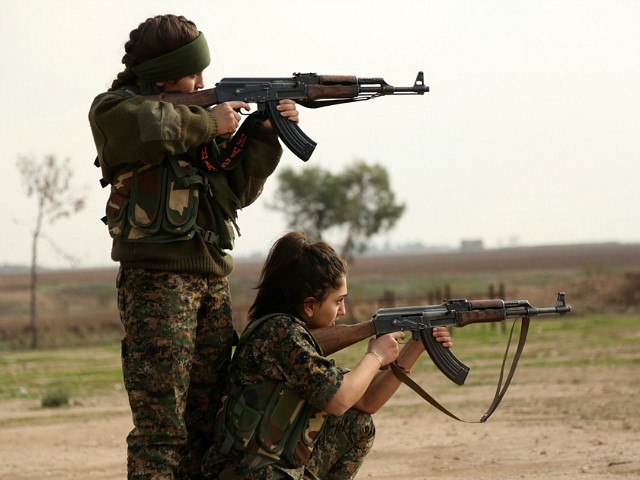 The YPG and its all-female brigade, the YPJ, are the military wing of the People’s Democratic Union (PYD), a Kurdish political faction in Syria advocating for the creation of a sovereign Kurdish state out of Syrian Kurdistan, or Rojava. They are widely considered the single most successful militia in fighting the Islamic State, and have cooperated with both the United States and Russia, sharing intelligence to allow precision airstrikes on ISIS targets. The YPG were responsible for the victory against ISIS in Kobani, on the Turkish border, that cut the supply of jihadis from the west into Syria.

Under the Trump administration, Syrian Kurds have said they felt fully supported in their fight against ISIS, and reports indicate they may play a large role in the operation to liberate Raqqa, the ISIS “capital,” despite its location far outside Rojava. The YPG do not appear particularly

While Marxist in ideology and sporting some ties (how strong they are is a matter of heated debate) with the U.S.-designated terrorist group Kurdistan Workers’ Party (PKK), the YPG is largely pro-American and even boasts several American volunteer fighters. Western YPG volunteers receive funerals with high honors when they die fighting for the Kurds against ISIS.

The YPG opposes Assad only so far as it is seeking an independent Kurdistan, but has no overt interest in the Arab leadership of Damascus. Its main rivals on the ground are ISIS and the government of Turkey, as a Kurdish state would include some Turkish territory. Thus the two main factions supporting neither Assad nor ISIS in Syria refuse to work together, making U.S. diplomacy that much more complicated. 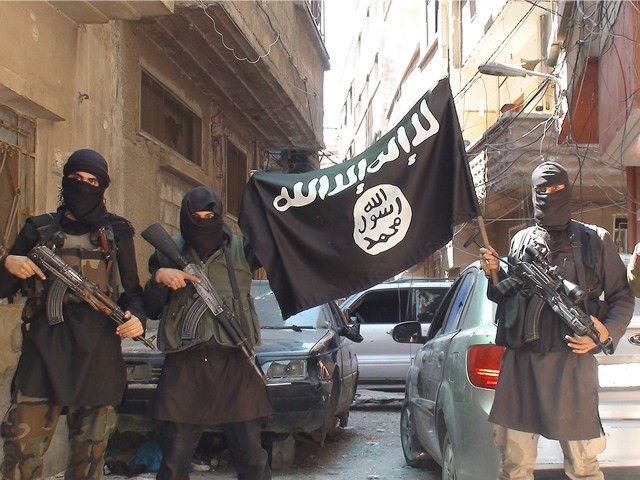 ISIS remains the primary target of U.S. and Kurdish military activity in the region. The group has committed acts of genocide against Shiites, Christians, and Yezidis; destroyed museums full of priceless ancient artifacts as a protest against “idolatry;” forced an untold number of girls and women into sex slavery and slave marriages; and crucified, tortured, and brainwashed Sunnis, adults and children alike, as a mode of imposing its interpretation of Sharia law.

The Islamic State still controls Raqqa, Syria and Mosul, Iraq, but has lost much of its territory in the region. Meanwhile, it has expanded its reach into Libya, Afghanistan, the Philippines, and Europe. 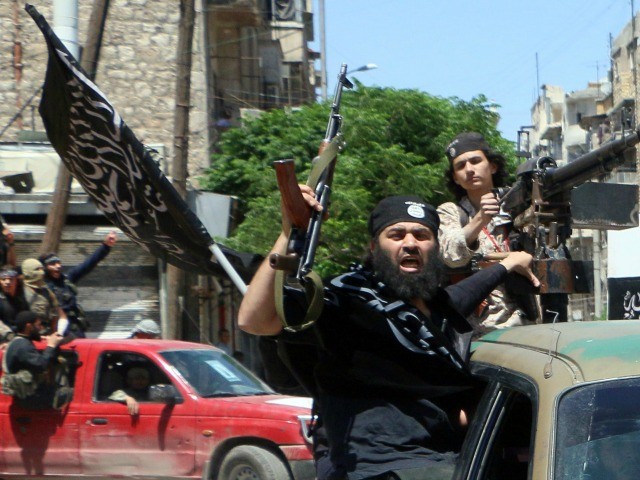 Amid early clashes between the Assad regime and Syrian rebels, al-Qaeda used Assad’s widespread unpopularity among Sunnis as a recruiting tool for its armed wing in Syria, the Nusra Front. The Nusra Front has since split from al-Qaeda, though many argue it has done so in name only. Nusra has expanded its focus of attack into rebel-held parts of the capital, Damascus, while al-Qaeda has begun branding itself as the flagship jihadist organization and expanding its influence into areas formerly held by the Islamic State.

Al-Qaeda has begun not only to capitalize on ISIS’s failures, but suck the oxygen out of the Free Syrian Army, as well. As mentioned above, the Obama-era alliance with the FSA resulted in mass desertions from the FSA to the then-Nusra. The soldiers who defected took their U.S. weapons with them. With the added manpower, reports suggest al-Qaeda’s allies in the country have begun to use the global focus on fighting ISIS to take over volatile territories no longer stably held by either Assad, ISIS, or the YPG. 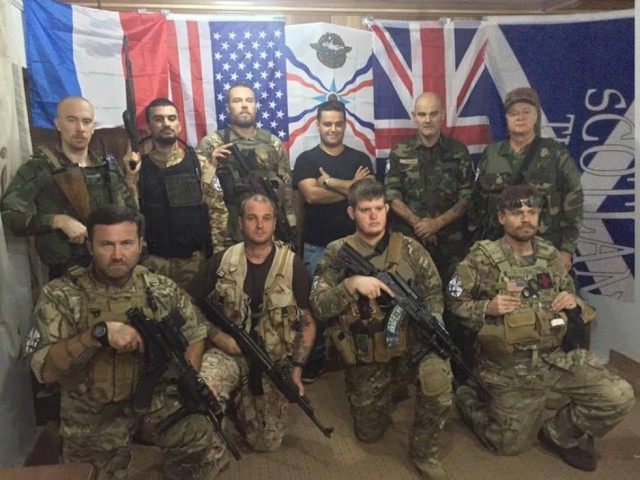 Christians are a minority in Syria, and among the most persecuted. Some have nonetheless attempted to form self-defense militias interested in keeping jihadist groups out of their towns. Among the largest Christian militias is the Assyrian Dwekh Nawsha (“self-sacrifice”), which operates against the Islamic State and jihadist groups in particular. Dwekh Nawsha agreed to join forces with smaller Christian fighting brigades late last year.

In 2015, reports suggested that the Assyrian Christian forces had managed a delicate agreement with Arab rebels and Kurdish militia fighters to all target the Islamic State. Christians are the targets of discrimination from Arab rebels, ISIS, and the Kurds, however, leaving them often to fight for their territory alone.

Christian militias have vocally pleaded for help from the United States, which has preferred investing in the Free Syrian Army and the YPG.

As the Christian fighters are largely preoccupied with combatting attacks from ISIS and the Kurds, they remain largely silent regarding Assad, who has made support for Syrian Christian communities a political priority.