Egypt in 3-month state of emergency after Coptic church bombings 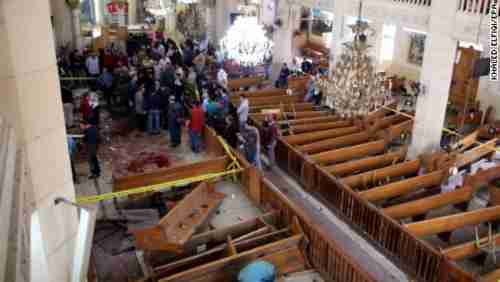 Coordinated bombing attacks on two different Coptic Orthodox Christian churches in two different cities in Egypt killed at least 45 people and injured over 100. Both churches were crowded with worshippers at the Palm Sunday service.

Palm Sunday falls each year one week before Easter, which this year occurs on April 16 for both Western and Orthodox Christians. Palm Sunday is one of the holiest days in the Christian calendar, marking the triumphal entry of Jesus Christ into Jerusalem.

The Sinai terror group called Ansar Bayt al-Maqdis (ABM – Ansar Jerusalem – Champions of Jerusalem) took credit for the both bombings. The group changed its name to Al Wilayat Sinai (Province of Sinai) when it changed its allegiance in 2015 from al-Qaeda to the so-called Islamic State (IS or ISIS or ISIL or Daesh).

ABM has taken credit for the December 11, 2016, bombing of the St Peter and St Paul chapel adjoining Saint Mark’s Coptic Orthodox Cathedral in Cairo, killing 29, and promised to attack more Christian targets. Coptic Christians make up about 10% of Egypt’s population.

Egypt’s President Abdel al-Fattah al-Sisi declared a state of emergency in Egypt for three months. The measure allows authorities to make arrests without warrants and search people’s homes. Human rights organizations have expressed concern that the state of emergency will permit al-Sisi to take on additional dictatorial powers, and will abuse those powers. The dictator Hosni Mubarak imposed a similar state of emergency for 20 years, before being ousted in 2011 by the “Arab Spring.” Al Ahram (Cairo) and BBC and Al Jazeera

The US Pacific Command announced on Saturday that the USS Carl Vinson aircraft carrier strike force has left Singapore and is headed for the Korean peninsula. It was diverted from previous plans for carrier exercises and port visits in Australia.

This action takes on special significance because it appears to be similar to the action taken last week in the Mediterranean Sea just before the US Navy launched 59 Tomahawk cruise missiles to attack targets in Syria, following the Syrian regime’s use of Sarin gas, a forbidden WMD (weapon of mass destruction).

North Korea has been testing ballistic missile systems and nuclear weapons, a WMD forbidden to North Korea by UN Security Council resolutions. Experts warn that North Korea is getting closer to deploying a nuclear-tipped rocket capable of reaching the United States mainland, as well as Japan, South Korea, Australia, and China. Thus there is speculation, completely unconfirmed, that President Donald Trump might order a missile strike on North Korea’s ballistic missile and nuclear weapons development facilities, in order to at least delay further development. According to one military analyst:

It’s a well-timed move. We obviously don’t have the ability to strike their nuclear facilities, they are buried deep underground, but we can go after the missiles themselves while they are fueling. It’s a signal to the North Koreans that we will, for the time being, have the ability to attack those facilities.

President Trump has been pressuring China to try to force North Korea to give up its nuclear and ballistic missile development program, and has recently said that “If China is not going to solve North Korea, we will.”

When Trump met last week with China’s president Xi Jinping, North Korea was a major topic of discussion between the two leaders, but reports indicate that no agreement was reached on how to end the threat from North Korea.

Instead, there was nothing but posturing and impossible demands. Trump demands that China prevent North Korea’s further missile and nuclear development. China has agreed to implement the sanctions demanded by the UN Security Council, and most recently says that it has stopped importing coal from North Korea. However, there are some reports that North Korea is looking for other markets in which to sell its coal, and Russia may be one of them. At any rate, there really is nothing realistic that China can do, short of military action, to stop North Korea’s missile and nuclear development.

China demands that the US agree to a “dual suspension” on the Korean peninsula, canceling its joint military drills with South Korea in return for a moratorium on North Korean testing, and then promising to negotiate a peace treaty with North Korea. The US has repeatedly been duped by North Korea when entering such agreements, and there is no chance that Trump will allow the US to be duped again. So China’s demands are also completely unrealistic.

So this brings us to the obvious question: Why is the Carl Vinson strike group heading for the Korean peninsula, and what has it been ordered to do when it gets there? Is it just going to sit there and wait for something to happen, and leave in a few weeks having accomplished nothing, allowing North Korea to continue developing nuclear-tipped rockets capable of hitting the US mainland? Or is some military action planned, with the intention of fulfilling Trump’s promise, “If China is not going to solve North Korea, we will”?

One way or another, we’ll probably have an answer within a few days. Navy Times and News Corp (Australia) and BBC and South China Morning Post (Hong Kong)

The US has begun deployment in South Korea of the Terminal High Altitude Area Defense (THAAD) an advanced anti-missile system that can blast incoming missiles out of the sky.

The stated purpose of the deployment would be to protect South Korea from a North Korean ballistic missile attack. However, China has expressed increasing fury because the system has advanced radar capabilities that would provide early warning for a Chinese missile attack on the United States.

China’s fury has taken the form of economic sanctions. China has banned tour groups from visiting China, has removed popular South Korean TV dramas from the internet, and has forced the closure of 75 South Korean Lotte stores in China, resulting in $179 million in losses.

A website reader living in Seoul has written to me to describe the devastating impact of the actions by China and North Korea:

China’s economic boycott of Korea over THAAD has hit the country like a ton bricks. I went to the flagship Lotte department store today, and it was practically empty. I have friends who own their own businesses, and they tell me they are facing bankruptcy because of the loss of Chinese customers. The thing is, Koreans, by and large, hate the Chinese. This embargo is only heightening the hatred. I think this embargo has finally woken people up to the fact that China is an existential threat to Korea…

Tonight, for the first time in my life, Koreans told me they were afraid that war was imminent. I have lived in Asia (on and off) since the 1970s, and I have never heard a Korean say anything like that. Tonight, someone in my office told me that she was scheduled to to visit America in May, but that she was afraid a war would break out before she had a chance to leave. Leaving the office tonight, a co-worker told me she was scared. I was stunned. This can’t bode well.

If this is the end, oh well. I just hope I die instantly. I’m worried I won’t be killed in the first artillery barrage. As densely packed as Seoul is, the death toll, the carnage, will be beyond belief…

I can’t believe how much the mood here has flipped. The word ‘changed’ would be inappropriate. Things are different now. I feel sick.

I guess we can all hope that if we have to die that we die instantly.

This is an appropriate time to repeat what I’ve written many times in the past. A lot of people believe some variation of “X and Y won’t go to war, because it’s bad for business.” Actually, the opposite is true, as we are seeing in the case of Lotte. If two countries have a business relationship, then the business relationship won’t prevent war, but instead will turn into one more weapon of war. CBS News