Japan’s largest warship, the JS Izumo, will escort and defend a US supply ship 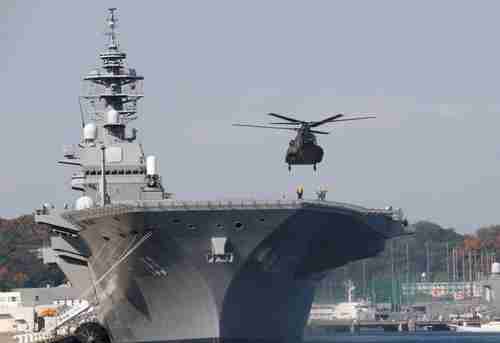 A helicopter lands on the decks of the JS Izumo (Reuters)

Japan’s largest naval destroyer, the JS Izumo, has left port on a mission to escort and defend a US supply ship that will refuel the USS Carl Vinson aircraft carrier strike group, which has been traveling to the region in response to threats from North Korea.

Today, all three of these reasons have changed dramatically, in this generational Crisis era. First, it is thought to be necessary because North Korea has been making specific threats to target American ships, and has been testing missiles and nuclear weapons in support of that threat.

Second, both China and North Korea have become increasingly warlike and belligerent, and both have been making implied or explicit military threats. In the last two years, China has had a huge military buildup in the South China Sea, in proven violation of international law, and has been annexing regions in the South China Sea that have been owned or used by other countries for centuries.

And the third change is an outcome of the previous two. As I’ve been writing for years, in this generational Crisis era, it seems that almost every nation on earth has become increasingly nationalistic and xenophobic, whether in America, Europe, the Mideast or Asia. The mutual xenophobia between China and Japan has been simmering for a long time, but because of the increased war buildup of both China and North Korea, the mood of Japan’s population has become far more nationalistic than before, allowing the prime minister Shinzo Abe to bring about a modification to Japan’s pacifist constitution. The Diplomat and BBC

Japan’s prime minister Shinzo Abe has long been advocating the removal of the self-defense clause of Japan’s constitution that forbids any military action except to defend against a military attack on Japanese soil. However, the votes necessary to pass a constitutional amendment have never been available.

But he was able to get Japan’s Diet (parliament) to pass an ordinary law that reinterprets the phrase “self-defense” to mean “collective self-defense.” This is a doctrine that permits any country to legally pursue foreign military action anywhere in the world in order to defend its allies.

There is already been one test of the new “collective self-defense” policy. In November of last year, Japan deployed 350 SDF (Self-Defense Forces) troops to South Sudan to act as peacekeeping forces. There were SDF forces in South Sudan in the past, but they were restricted to non-combat roles such as rebuilding roads and refugee camps. The November deployment permitted them to engage in combat if they are attacked, or if other nations’ peacekeepers are attacked. Since then, no actual combat has been reported.

That was the first time since the end of World War II that Japan’s military was permitted to engage in combat for any reason outside of Japanese soil, and even that minor deployment was extremely controversial in Japan.

The deployment of the JS Izumo to escort and defend a US supply ship is a big leap forward in use of Japan’s new collective self-defense doctrine, and will further increase the nationalism in Japan, North Korea and China. Japan Times