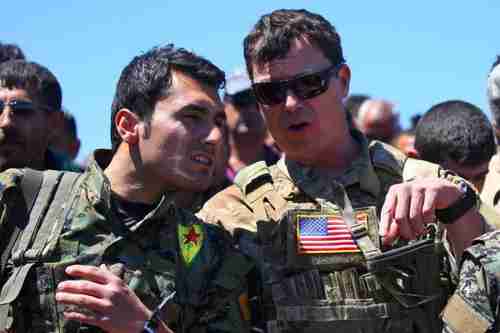 Turkey is planning to form a new “National Army” in northern Syria, bringing together factions from the Free Syrian Army (FSA) that fought last year as part of Turkey’s Operation Euphrates Shield, joined by defectors from the Syrian regime’s army. The objective of the previous operation, which began on Aug 24 of last year and ended on March 29 of this year, was to clear out both the the so-called Islamic State (IS or ISIS or ISIL or Daesh) and the Kurdish People’s Protection Units (YPG) from a region in northern Syria.

The YPG has links to the Kurdistan Workers’ Party (PKK), which has been fighting a separatist rebellion in Turkey since the 1980s, and which has perpetrated a string of major terrorist attacks in Turkey in the last two years. For these reasons, Turkish-led military actions in northern Syria were intended to prevent the Kurds from taking control of the entire northern border of Syria, and then declaring an independent Kurdish state of Rojava.

An additional purpose of the new “Syrian National Army” was to create a buffer zone or safe zone for Syrians fleeing the conflict, something that Erdogan has been demanding for years. According to Erdogan:

Once we have created a safe zone, the Syrians will be able to establish their National Army, so they can feel safe.

According to Turkish media, almost a million people so far have returned to the area cleared of ISIS and the YPG, or have been relocated there from other conflict areas.

The Syrian conflict has resulted in millions of refugees. Some three million are in Turkey, about one million are in Europe, and millions more are in Jordan and Lebanon. The safe zone or buffer zone in northern Syria could provide for Syrian refugees within Syria itself.

The role of the YPG is a major area of contention between Turkey and the US. The YPG are allies of the US military who considers them to be the most effective anti-ISIS fighting force in the region. However, because of the YPG links with the PKK, Turkey considers the YPG to be terrorists. It is believed that there are hundreds of US special forces troops in the region, and one of their objectives is to keep the Turks and the Kurds from shooting at each other. TRTWorld-Youtube (Turkey) and Al Monitor and Reuters (18-May)

The US army has begun arming YPG Syrian Kurdish militias, as announced early in May. The weapons would include small arms, mortars, AK-47s, heavy machine guns, shoulder-fired weapons, ammunition, bulldozers and armored vehicles such as the M1117 Guardian. According to the military, the selected weapons will address the specific threats that ISIS poses, such as the Vehicle Borne Improvised Explosive Devices (VBIEDS), or car bombs of the type that ISIS has used to break up assaults.

This comes on the eve of the assault on Raqqa, the major stronghold and so-called Caliphate of ISIS. The YPG-led Syrian Democratic Forces (SDF) are now about two miles from the city, and the battle to eject ISIS is expected to be extremely bloody and last for weeks or months.

It is believed that within a few months, ISIS will have been ejected from both Raqqa and Mosul. Until then, all these various armies and militias have a common enemy. After that, these armies will have no one to fight except each other, and one possibility is that the thousands of ISIS fighters will return to their home countries, possibly to conduct lone wolf attacks. Military Times/AP and Fox News and NRT (Kurdistan) and Sputnik News (Moscow)