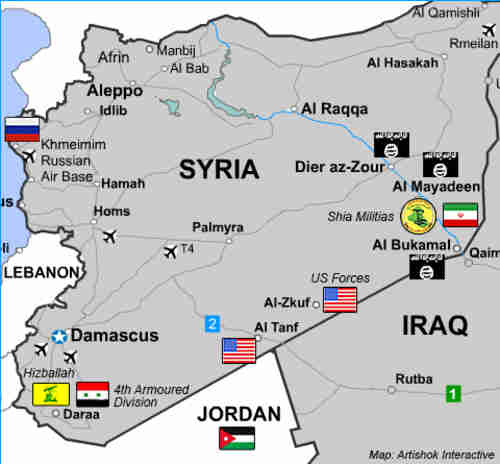 US warplanes struck Iran-backed pro-Syrian forces twice on Thursday, making those the second and third such strikes in the last month. According to the military, all three of the strikes were for the protection of American and coalition forces stationed in the al-Tanf base, on Route 1 on the border between Iraq and Syria.

On Thursday, coalition warplanes destroyed two armed pro-regime vehicles that were traveling toward the al-Tanf base. They were inside a “de-confliction zone,” as specified by an agreement between Russia and the US to keep potentially hostile forces separated in Syria.

Later on Thursday, a US aircraft shot down an armed pro-Syrian unmanned drone that had dropped munitions in a region occupied by American and coalition personnel. The munitions did not cause any casualties.

US Army spokesman Colonel Ryan Dillon said in a statement on Thursday:

The pro-regime UAV, similar in size to a U.S. MQ-1 Predator, was shot down by a U.S. aircraft after it dropped one of several weapons it was carrying near a position occupied by Coalition personnel who are training and advising partner ground forces in the fight against ISIS.

The shoot down follows an earlier engagement in the day in which Coalition forces destroyed two pro-regime armed technical vehicles that advanced toward Coalition forces at At-Tanf inside the established de-confliction zone threatening Coalition and partner forces.

The Coalition does not seek to fight Syrian regime, Russian or pro-regime forces partnered with them. The demonstrated hostile intent and actions of pro-regime forces near Coalition and partner forces in southern Syria, however, continue to concern us and the Coalition will take appropriate measures to protect our forces.

There has already been one deadly confrontation, as we reported in May. A pro-Syrian regime convoy was headed in the direction of the al-Tanf camp. US warplanes were scrambled in a “show of force” to dissuade the convoy from proceeding further. That show of force was only partially successful, as five of the vehicles continued approaching the base. In response, American warplanes launched a series of airstrikes against the military convoy, destroying all the vehicles. CNN and Military.com and ARA News (Syria Kurds)

There are numerous different forces operating in Syria and Iraq – Americans, Turks, Kurds, Syrians, Iranians, Hezbollah, al-Qaeda, the Free Syrian Army (FSA) and the so-called Islamic State (IS or ISIS or ISIL or Daesh). As we have been saying for months, all of these forces (except ISIS) have been united only in that they were all nominally fighting against ISIS, albeit with a variety of hidden and conflicting objectives. Now that that the defeat of ISIS in Raqqa in Syria and in Mosul in Iraq appears to be increasingly imminent, all of these different forces will have no one to shoot at except each other.

The main military objective of Iran and the Syrian regime is to have complete control of a route, such as Route 1, between Baghdad and Damascus, so that Iran can easily transfer fighters and weapons into Syria, where they can be used against Sunnis, or handed off to Hezbollah for attacks on Israel. The US is opposed to allowing this route to be open.

As ISIS is forced to cede territory, different forces compete to control that territory, and it appears that the next major confrontation will be over the oil-rich region surrounding Deir az-Zour, the largest urban center in eastern Syria. ISIS has moved fighters fleeing from Mosul and Raqqa into Deir az-Zour, making the battle for this city likely to be as bloody as the battles for Mosul and Raqqa. A US-backed coalition of rebel groups are moving in, as are Syrian and Iran-backed forces, from different directions.

[Note: If you read the media reports, you’ll find the name of this city in English spelled in a large variety of ways: Deir az-Zour = Deir Ezzor = Deir al-Zour = Deir ez-Zor = Deir Azzour]

Some reports indicate that the US has set up a forward base at al-Zukf (or al-Zkuf), 70 km northwest of the al-Tanf base. The goal is to be in position to support its coalition of rebel groups in their battle against ISIS in Deir az-Zour. There are already been clashes between these groups and Iran-backed forces. Washington Post and Global Research and Debka