North Korea threatens US bases on island of Guam 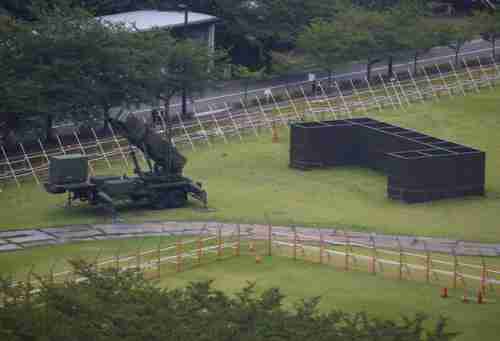 A Patriot Advanced Capability-3 (PAC-3) missile battery at the Defense Ministry in Tokyo.

On Wednesday of last week, the state-run North Korean Central News Agency (KCNA) reported that the US strategic bombers at the US military bases on the island of Guam “get on the nerves of the DPRK [North Korea]”, and therefore the KPA [Korean People’s Army] is making plans for a missile attack:

The KPA [Korean People’s Army] Strategic Force is now carefully examining the operational plan for making an enveloping fire at the areas around Guam with medium-to-long-range strategic ballistic rocket Hwasong-12 in order to contain the U.S. major military bases on Guam including the Anderson Air Force Base in which the U.S. strategic bombers, which get on the nerves of the DPRK and threaten and blackmail it through their frequent visits to the sky above south Korea, are stationed and to send a serious warning signal to the U.S.

The plan is to be soon reported to the Supreme Command soon after going through full examination and completion and will be put into practice in a multi-concurrent and consecutive way any moment once Kim Jong Un, supreme commander of the nuclear force of the DPRK, makes a decision.

The execution of this plan will offer an occasion for the Yankees to be the first to experience the might of the strategic weapons of the DPRK closest.

Explicitly speaking again, the strategic weapons which the DPRK manufactured at the cost of blood and sweat, risking everything, are not a bargaining thing for getting acknowledgement from others and for bartering for anything, but they serve as substantial military means for resolutely countering the U.S. political and economic pressure and military threat as what has been observed now.

On Thursday, KCNA “clarified” the statement:

As already clarified, the Strategic Force of the KPA is seriously examining the plan for an enveloping strike at Guam through simultaneous fire of four Hwasong-12 intermediate-range strategic ballistic rockets in order to interdict the enemy forces on major military bases on Guam and to signal a crucial warning to the U.S.

On Tuesday, the KPA Strategic Force through a statement of its spokesman fully warned the U.S. against its all-round sanctions on the DPRK and moves of maximizing military threats to it. But the U.S. president at a golf links again let out a load of nonsense about “fire and fury,” failing to grasp the on-going grave situation. This is extremely getting on the nerves of the infuriated Hwasong artillerymen of the KPA. …

The Hwasong-12 rockets to be launched by the KPA will cross the sky above Shimane, Hiroshima and Kochi Prefectures of Japan. They will fly 3 356.7 km for 1 065 seconds and hit the waters 30 to 40 km away from Guam.

The KPA Strategic Force will finally complete the plan until mid August and report it to the commander-in-chief of the DPRK nuclear force and wait for his order.

We keep closely watching the speech and behavior of the U.S.

President Donald Trump responded by threatening to unleash “fire and fury” on North Korea, and later added that the military options are “locked and loaded.” Korean Central News Agency (KCNA) and CBS News

Leaders in Guam, South Korea, and Japan expressed hope that war is not imminent, but they are all preparing for any eventuality.

While advising people to continue their business as usual, Guam’s Office of Civil Defense began distributing a fact sheet entitled “Preparing for an Imminent Missile Threat.” In case a missile is approaching, keep calm and, if you’re caught outside:

Do not look at the flash or fireball — it can blind you. Lie flat on the ground and cover your head.

Japan is holding missile evacuation drills for the public and is doing a lot more: Planning to install additional Patriot Advanced Capability-3 (PAC-3) anti-missile systems. There is particular concern about the three prefectures that North Korea threatened: the Shimane, Hiroshima and Kochi Prefectures.

Japan is saying that since Japan is potentially threatened by the North Korean missiles, they are justified in shooting them down. This would require the government to declare a “survival-threatening situation.”

The Standard Missile-3 (SM-3) system mounted on Aegis-equipped destroyers can shoot down incoming ballistic missiles in outer space at a maximum altitude of about 500 kilometers. The SM-3 system is designed to shoot down missiles traveling on a parabolic path when they start descending.

The second layer of Japan’s missile defenses is the surface-to-air Patriot Advanced Capability-3 (PAC-3) guided missiles, which can destroy targets at altitudes between 10 and 20 kilometers if SM-3 interceptor missiles are not effective. The country’s 34 PAC-3 units attached to 17 anti-aircraft units are mostly deployed in densely populated areas like the Tokyo metropolitan and Kyushu regions as well as at major Self-Defense Forces bases. It’s expected that Japan will redeploy two PAC-3 systems to the prefectures threatened by North Korea. Japan News and Japan Times and Nikkei Asian Review

Article 9 of Japan’s constitution, imposed on Japan by US Gen. Douglas MacArthur at the end of World War II, renounced war and the threat or use of force. Technically, Japan does not have the right to shoot down North Korean missiles.

The pacifist Article 9 remains extremely controversial. Many conservatives see it as a humiliating imposition, while liberals view it as the basis of Japan’s peace and democracy.

Japan’s Defense Minister Itsunori Onodera on Thursday said that it would be necessary to declare a “survival-threatening situation,” which would enable Japan to exercise its right of collective self-defense, with a view to intercepting North Korean missiles on behalf of Japan’s ally, the United States. According Japanese officials, certain conditions would have to be met:

If it is judged that North Korea indicates a clear intention to attack the United States and starts missile launch preparations, an armed attack would be considered to have occurred.

However, if North Korea says it’s targeting the missiles outside [U.S.] territorial waters, it would be difficult to call it an attack against the United States and declare a survival-threatening situation.