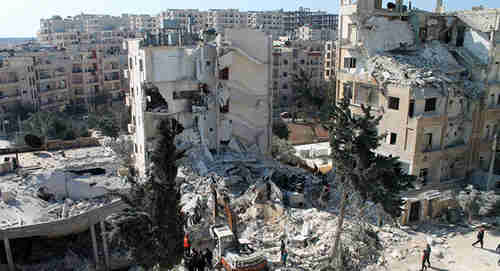 Turkey announced that it is beginning a military operation in Syria’s Idlib province. It will follow the terms of an agreement made in Astana, Kazakhstan by Turkey, Russia, and Iran to create four “de-escalation” zones in Syria with the objective of ending the war. Turkey’s military operations will be in the Idlib de-escalation zone, which includes Idlib, Latakia, Aleppo and Hama, and is bordered by Homs and Turkey itself.

The purpose of the operation will be to eliminate the al-Qaeda linked Hayat Tahrir al-Sham (HTS). However, Turkey has an additional objective: To prevent the Kurdish People’s Protection Units (YPG), currently controlling the city of Afrin north of Idlib near Turkey’s border, from entering Idlib and thereby controlling a corridor in northern Syria along Turkey’s border.

Turkey’s president Recep Tayyip Erdogan announced the deployment on Saturday and said that Turkey would not allow a “terror corridor” on its border with Syria, referring to Kurdish objective to establish the state of Rojava in northern Syria as a corridor along the border with Turkey. Erdogan said:

There’s a serious operation in Syria’s Idlib today and it will continue. For now Free Syria Army is carrying out the operation there. Russia will be protecting outside the borders (of the Idlib region) and we will handle inside.

Russia is supporting the operation from the air, and our armed forces from inside Turkey’s borders.

The phrase “from inside Turkey’s borders” is interpreted to mean that Turkey’s army will not (again) enter Syria, for the time being.

Erdogan also said that Turkey would not be “cornered by any threats from Syria and Iraq.” He referred to the three million Syria refugees currently being hosted by Turkey and said:

We are not intervening in the domestic affairs of any country. We are just trying to secure our own home affairs … How safe we can be when there is chaos in Syria? … Can we escape from the results of developments in Syria?

There has already been a firefight between Turkey’s troops and HTS. Early on Sunday, Turkey’s military was removing sections of a border war between Turkey and Syria, and HTS began firing on a Turkish bulldozer. Turkish artillery returned fire.

In a harbinger of things to come, on Sunday morning warplanes from the Syrian regime military struck a marketplace within the Idlib de-escalation zone, killing at least six people. Hurriyet (Ankara) and Anadolu (Ankara) and Reuters and Yeni Safak (Turkey)

Turkey’s success in Idlib is far from certain

Idlib province is currently under control of al-Qaeda-linked Hayat Tahrir al-Sham (HTS). However, there are also thousands of civilians, including many women and children, who fled from Aleppo last year when the Bashar al-Assad regime, with help from Russian airstrikes, was trying to make Aleppo uninhabitable.

There have been two jihadist groups formed in Syria following the brutal attacks by al-Assad’s Shia/Alawite regime on peaceful Sunni Muslim protesters, starting in 2011, particularly following al-Assad’s completely unprovoked attack on a Palestinian refugee camp in August 2011, killing many women and children.

That attack triggered the arrival of tens of thousands of young Sunni Muslim jihadists from over 80 countries around the world, from southeast Asia, from Africa and from Europe and Russia’s Caucasus. Those jihadists formed the so-called Islamic State (IS or ISIS or ISIL or Daesh). In the last year, ISIS has been the target of all the other militias: the Americans, the Syrians, the Russians, the Kurds, the Iranians, Hezbollah, and the Iraqis. The presence of ISIS allowed all these other entities to adopt a joint strategy of fighting ISIS, while keeping out of each other’s way.

One difference in Idlib is telling the good guys from the bad guys. Since ISIS consists almost entirely of foreign fighters from over 80 countries, it is fairly easy to distinguish an ISIS fighter from an ordinary Syrian. But HTS is consists of Sunni Muslim Syrians, as does almost the entire population of Idlib province.

The fight against ISIS is coming to an end, and now all the entities fighting ISIS are scrambling to gain control of as much territory as possible. In eastern Syria, almost everyone wants control of all the oil fields around Deir az-Zour.

In Idlib, Turkey wants to provide protection to all the Sunni Muslims living there, especially since Bashar al-Assad considers them all to be cockroaches to be exterminated. Although Idlib is a de-escalation zone, Bashar al-Assad has made it clear that he considers the de-escalation zones only a temporary solution, and when ISIS is defeated he plans to turn his military around and take control of the entire country, including Idlib. This scenario would result in the population of Idlib fleeing into Turkey, which Erdogan has said he will not permit.

Turkey has been promising for months that when its military operation in Idlib was completed, and HTS was evicted, then Turkey would build mass housing in Idlib, so that all the civilians will stay there, and not try to flee to Turkey.

I believe you can see, Dear Reader, the huge conflicts that are approaching as the fight against ISIS ends. Turkey will not tolerate the destruction of Idlib, and Russia has agreed with Turkey about that. Syria will not permit Turkey or anyone else to be in control of Idlib, and Russia has agreed with al-Assad about that as well, although it contradicts the previous agreement. Al-Assad promised last year when he destroyed Aleppo and made it uninhabitable that doing so would end the war, but there is no sign now that the war is anywhere near an end. Yeni Safak (Ankara) and Sputnik News (Moscow) and AFP and Al Jazeera