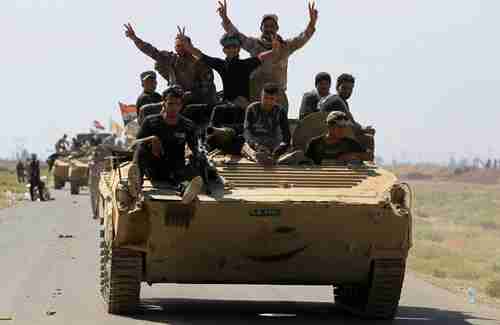 In a dramatic turn, hundreds of fighters from the so-called Islamic State (IS or ISIS or ISIL or Daesh) have surrendered en masse, following the recapture of the town of Hawija from ISIS occupation, suggesting that morale is collapsing among ISIS fighters.

However, they did not surrender to the invading Iraqi Shia government forces, presumably out of fear of retribution. Instead, they fled to the city of Kirkuk, which is held by Peshmerga (Kurdish militia), and surrendered to them. According to one Kurdish security official:

Approximately 1,000 men surrendered over the last week. Not all, however, are terrorists. It’s fair to say hundreds probably are [ISIS] members, but that will be clear after the debriefs.

ISIS was effectively defeated in Iraq in July, when Iraqi forces captured Mosul, the group’s de facto capital in Iraq, after a bloody nine-month battle. ISIS still holds some territory in western Iraq in a stretch of land along the border with Syria.

Iraq’s Prime Minister Haider al-Abadi says that the rest of ISIS-held territory will be recaptured by the end of the year.

Russian state media have been somewhat schizophrenic about the situation. On the one hand, they have congratulated the Iraq government for the victory in Hawija. On the other hand, because some ISIS fighters have fled across the border into Syria, they have gone off the deep end by claiming that the United States is only “pretending” to fight against ISIS in Iraq. Very funny. Reuters and Sputnik (Moscow) and Al Bawaba and Russia Today

Tensions grow between Turkmens and Kurds in Kirkuk

The fight against ISIS has unified many groups of forces – the Iraqis, the Kurds, the Turks, the Russians, the Syrians, the Iranians, Hezbollah, and the Americans – in a common goal of defeating ISIS. As ISIS continues to lose ground in both Iraq, all of these forces are increasingly turning their attention to fighting each other.

As we reported a couple of days ago, Kirkuk is becoming a flashpoint in northeastern Iraq. Since 2014, it was the Kurdish Peshmerga militia forces that have fought ISIS and prevented a takeover of Kirkuk, and now the Kurds expect to retain control of Kirkuk, especially as a result of the overwhelming passage of the September 25 Kurdistan referendum on independence from Iraq.

Turkmens are the third-largest ethnic group in Iraq and claim to have been denied their rights since Saddam Hussein was overthrown in 2003. However, they have had their own internal problems because they have had their own sectarian split between Sunni and Shia Turkmens. However, the Turkmens in Kirkuk are united in that they do not want to be part of an independent Kurdistan.

Turkey and the Iraqi Kurds have been cooperating as long as the fight against ISIS in Mosul was progressing. But now, Turkey’s government is opposed to an independent Kurdistan and is particularly opposed to Kirkuk being part of Kurdistan.

Devlet Bahçeli, the head of Turkey’s Nationalist Movement Party (MHP), says that contested regions of Iraq, such as Kirkuk and Mosul, are “the lands of Turkmens.” There is a big Kurdish community in Turkey, including members of the terrorist group Kurdistan Workers’ Party (PKK), which has been conducting terrorist acts in Turkey for decades. Turkey fears that any sort of Kurdish independence in Iraq will energize the PKK in Turkey. Bahçeli says:

The safety of Kirkuk is the safety of Ankara. If the land of Turkmens is put into the fire, Turkey will not be safe.

A rehearsal for Kurdistan will affect the future of the Republic of Turkey. It is a question of survival, a matter of sociological fragmentation.

Bahçeli referred to the 1920 Treaty of Sévres, which divided up Ottoman territory after World War I. Al Monitor and Daily Sabah (Ankara) and Hurriyet (Ankara)