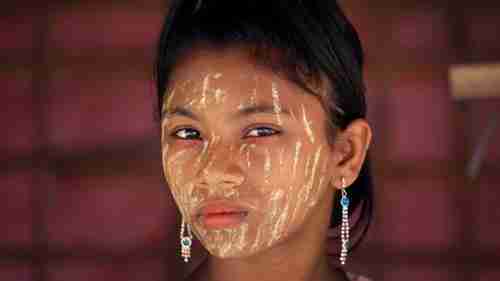 A Rohingya girl in a Bangladesh refugee camp, her face covered in ‘thanaka’, a comestic makeup paste widely used in the region, made from ground bark (AP)

Ethnic cleansing “clearance operations” by Burma’s (Myanmar’s) army have driven some 620,000 ethnic Rohingyas from Rakhine State into Bangladesh, threatening to destabilize the entire region. Burma and Bangladesh have now reached an agreement to return the Rohingyas starting in three months, but only after all the appropriate forms have been filled out for each one.

Burma’s Buddhist army has been conducting atrocities on Muslim ethnic Rohingyas in Rakhine State since 2012. In November of last year, the United Nations found that Burma’s army was “killing men, shooting them, slaughtering children, raping women, burning and looting houses, forcing these people to cross the river” into Bangladesh. Satellite images showed that Burma’s army was burning down entire villages where Rohingyas had lived for decades, in order to perform ethnic cleansing – “cleanse” Rakhine State of all Rohingyas.

After several years of these atrocities by Burma’s army, Rohingya activists have formed the Arakan Rohingya Salvation Army (ARSA), which attacked 8 Burmese police posts in October of last year. These attacks provoked a wave of deadly “clearance operations” by Burma’s army, and forced tens of thousands of Rohingyas to flee the violence into Bangladesh.

On August 25 of this year, ARSA conducted coordinated attacks on 30 police outposts and an army base. This became a major violence trigger for the entire Burmese army. Whereas the “clearance operations” by Myanmar’s army previously appeared to be reasonably disciplined, after August 25 they became extremely undisciplined and disorganized, to the point of mass bloody chaos, with the results that thousands fled across the border to Bangladesh each day. There are now around 620,000 Rohingya refugees in refugee camps in Bangladesh.

Burma’s “clearance operations” of Rohingyas is also creating a diplomatic problem for the Pope, who is scheduled to visit Myanmar on November 26 to December 2. The Pope is being cautioned not even to use the word “Rohingya,” for fear that Burma’s army will turn from murdering and cleansing Rohingyas to murdering and cleansing the Christian minority, particularly the 700,000 Roman Catholics.

On the other hand, if the Pope says nothing, then he risks his moral authority, in the same way that Pope Pius XII lost his moral authority for not criticizing the Nazi Holocaust. According to Father Thomas Reese, an analyst at Religion News Service:

He risks either compromising his moral authority or putting in danger the Christians of that country.

I have great admiration for the pope and his abilities, but someone should have talked him out of making this trip.

On Wednesday, for the first time, the U.S. administration raised the threat of targeted sanctions against Burmese officials, when Secretary of State Rex Tillerson referred to the “horrendous atrocities” as “ethnic cleansing” of Rohingyas. This has raised fears of a backlash, with the result that the US embassy in Myanmar on Thursday suspended official travel to parts of Rakhine until 4 December and warned citizens against visiting the areas.

The agreement that Burma and Bangladesh have reached for the return of refugees looks to me like a joke. There are 620,000 refugees, and the number is still growing every day. Return of refugees will not begin for three months, and then only when forms have been filled out, submitted to the Burma military, and approved. This is clearly a stalling maneuver by Burma, and signing it is an act of desperation by Bangladesh, who are still overwhelmed by the waves of refugees. Reuters and News24 (Bangladesh) and Reuters and Sydney Morning Herald

Last week, China said that Myanmar and Bangladesh should shut out the international community from interfering in the Rohingya crisis, but then offered itself to interfere by mediating between the two countries. According to Chinese state media, China offered a three-phase solution to the “Rakhine issue,” without mentioning the Rohingyas:

China’s third phase is particularly farcical. There is poverty in every country in the world, but it does not result in hundreds of thousands of refugees. The “Rakhine issue” is not caused by poverty. It is caused by Buddhist monks, members of the so-called religion of peace (Buddhism), and Burma’s Buddhist army committing war crimes, raping, torturing and killing innocent civilians, not because of poverty, but because the Burmese vitriolically hate the Rohingyas and would like to exterminate them.

China should understand this, because it has conducted similar operations in the past, with its Han Chinese army committing atrocities against its hated Buddhist Tibetans in China.

We stand by Myanmar in the hour of its crisis, we strongly condemn the terrorist attack on August 24-25 and condole the death of policemen and soldiers, we will back Myanmar in its fight against terrorism.

India’s statement made no mention of the atrocities committed by Burma since 2012, nor the “clearance operations” that have forced 620,000 Rohingyas so far to flee the violence. As we wrote last month ( “7-Oct-17 World View — Burma’s Rohingya crisis merges with the Kashmir crisis, inflaming the entire region”), Pakistan is siding with the Muslim Rohingyas. ARSA is linking up with anti-Indian jihadist groups in India-controlled Kashmir, so India officials see the Rohingyas as an existential threat. India has also threatened to expel nearly 40,000 Rohingya migrants it says have illegally settled in the country.

In September, Hong Liang, China’s ambassador to Myanmar, made a similar supportive statement:

The stance of China regarding the terrorist attacks in Rakhine is clear, it is just an internal affair; the counterattacks of Myanmar security forces against extremist terrorists and the government’s undertakings to provide assistance to the people are strongly welcomed.

China’s help for the Rakhine crisis is just a social obligation. The president of the Chinese Entrepreneurs Association, the vice president of the oil and gas pipeline project and responsible personnel from the Kyauk Phyu Deep Sea Port Project were brought here together with him; the company wished to provide assistance to the displaced persons.

As with India, the Chinese never mentioned the atrocities committed by Burma since 2012, nor the “clearance operations” that have forced 620,000 Rohingyas so far to flee the violence.

However, the Chinese statement highlights why China supports Myanmar despite the massive ethnic cleansing and slaughter. There are large gas reserves off the coast of Rakhine State, and China brings gas from Kyauk Phyu on Rakhine’s coast through the Myanmar-China Gas Pipeline. This gas meets the needs of China’s Yunnan, Guizhou and Guangxi provinces as well as that of other counties and cities. The transportation of this gas is more important to China than the ethnic cleansing of the Rohingyas.

India also has huge infrastructure projects in Rakhine, including the India-funded Kaladan multi-modal project designed to provide a sea-river-land link to its remote northeast through Sittwe port.

Both India and China fear the threat of terrorism on the Rakhine infrastructure projects, as well as on Indian and Chinese soil. Indian intelligence expert Major General Gaganjit Singh asks:

What if ARSA terrorists attack an Indian ship on the Kaladan river or try blowing up parts of the Yunnan-Kyauk Phyu oil-gas pipeline as the [separatist group United Liberation Front of Assam] used to do in [the Indian state of] Assam? Such scenarios cannot be discounted.

Readers may recall that in September there was a threat of war between India and China over a border conflict in Bhutan’s Doklam Plateau. That dispute was suddenly and unexpectedly settled and analysts could only guess at the reasons. Part of the speculation was that a conflict would spill over into Kashmir or into the Indian Ocean. Now there is another possibility: the fear that a Doklam border conflict might spill over into the Rakhine infrastructure projects of both countries. South China Morning Post (18-Oct) and Jamestown and Global New Light Of Myanmar and CNBC