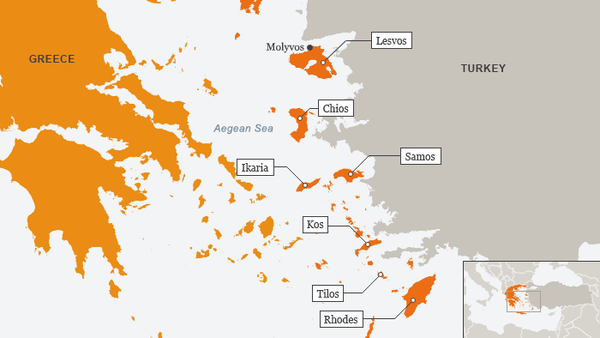 Turkey’s president Recep Tayyip Erdogan began a two-day trip to Greece on Thursday. This was the first visit by a Turkish head of state in 65 years, since 1952, and only the second visit by Erdogan to any EU nation in 18 months. Relations between Turkey and Greece have been tense for years (for millennia, actually), at a time when relations between Turkey and all of the European Union have been sharply deteriorating, and so the nominal purpose of this trip was to improve bilateral relations between Greece and Turkey.

So on Thursday, Erdogan referred to peace talks that failed this year and said:

Who left the table? Southern Cyprus did. … We want the issue to reach a fair and lasting solution but that is not southern Cyprus’ concern.

This was at a joint press conference with Greece’s president Alexis Tsipras. Tsipras responded:

My dear friend, Mr. President, we must not forget that this issue remains unresolved because 43 years ago there was an illegal invasion and occupation of the northern part of Cyprus.

Tsipras also complained about frequent violations of Greece’s airspace in the Aegean sea:

Erdogan claimed that Greece is violating the treaty by refusing to respect the Muslim minority living in Greece, particularly the Turkish enclave in Thrace in northeastern Greece near the border with Turkey. On Friday, the second day of his 2-day visit to Greece, Erdogan has scheduled a visit to Thrace to see for himself. Erdogan says that he visited western Thrace in 2005, where there are 150,000 Turkish descendants, and he wants to visit again. Erdogan is demanding increased rights for the Muslims of Thrace, complaining that Greece doesn’t even allow them to select their own religious leaders.

A final demand by Erdogan was to extradite eight Turkish soldiers and officers who fled from Turkey to Greece on the night of the botched coup in Turkey. The eight soldiers, included two commanders, four captains and two sergeants, had escaped to Greece on a Sikorsky helicopter and landed in Alexandroupolis. The soldiers denied involvement in the coup but said that they would not receive a fair trial in Turkey. Greece says that they cannot be extradited unless the courts rule it based on evidence that has so far not been presented that they were involved in the coup.

Overshadowing the visit was the situation involving the EU-Turkey migrant deal that was signed in 2015. The agreement has been very successful, in that it has reduced the flow of migrants from Syria and Iraq into the EU from a torrent into a trickle. However, the number of migrants has been increasing recently, and the EU has failed to fulfill its obligations under the deal: Visa-free travel for all Turkish citizens visiting Europe’s Schengen zone, and an acceleration of negotiations for Turkey to join the EU. Kathimerini and Deutsche Welle and Kathimerini

Airline passengers traveling from Greece to Germany are supposed to enjoy visa-free travel, since both countries are in Europe’s Schengen Zone, hailed as the greatest achievement of European integration. The Schengen agreement effectively abolished border controls between most European Union member states in 1985, allowing the area to function as a passport-free single country for all its travelers.

For the past three weeks, planes carrying passengers from Greece to Germany are no longer allowed to debark into the airline terminal. Instead, they are herded into a bus and taken to a secluded corner of the airport, where they have to stand out in the cold for up to an hour to receive scrutinizing passport checks and controls. Belgium is adopting a similar policy.

The reason given is security, and fears of a terror attack during the holiday season. Germany’s Interior Ministry says that authorities have counted more than 1,000 illegal entries from Greece since the start of the year.

Greeks are furious that, once again, they are being used as scapegoats and held to blame for a refugee problem that they did not create and for which they are receiving little help from the rest of the EU. According to one traveler from Greece:

Germany’s security concerns may be valid. And the Greek government, also, may be responsible for its abysmal handling of the refugee crisis. But that does not justify unilateral action. It is as if the US state of Massachusetts orders all incoming US travelers from California to go through passport controls at foreign arrivals terminals because California is teeming with migrants.

This incident only adds to the general fury that Greeks continue to feel towards the Germans after Germany demanded that draconian fiscal measures be imposed on Greece during the bailout negotiations several years ago. Many Greeks are also still furious at Germany for the Nazi invasion. Kathimerini (21-Nov) and Deutsche Welle (28-Nov)