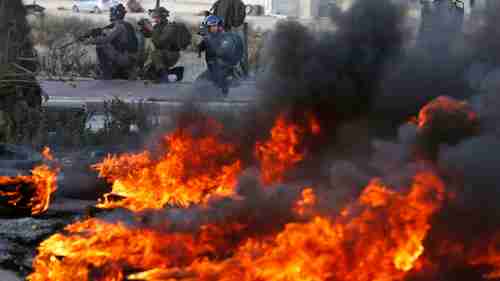 Wednesday’s proclamation by president Donald Trump to recognize Jerusalem as the capital of the state of Israel, and to relocate the American embassy from Tel Aviv to Jerusalem, has roiled international media and politicians around the world.

International reaction was negative to the point of being hysterical.

I cannot silence my deep concern over the situation that has emerged in recent days. At the same time, I appeal strongly for all to respect the city’s status quo, in accordance with the relevant UN resolutions.

[The announcement] has a very worrying potential impact. It is a very fragile context and the announcement has the potential to send us backwards to even darker times than the ones we are already living in.”

The worst thing that could happen now is an escalation of tensions around the holy places and in the region because what happens in Jerusalem matters to the whole region and the entire world.

Britain’s Labor shadow foreign secretary Emily Thornberry said that he had taken a “hammer blow” to the peace process, and that “He is setting it back decades.”

Although these remarks are all underpinned by the usual hate-Israel hate-Trump hate-America attitudes that are prevalent, there is an underlying logic: It is pretty clear that the Mideast is headed for all-out war, and the remarks reflect a fear that Trump’s announcement will trigger that war.

In fact, Hamas leader Ismail Haniya called for a new “intifada”, or uprising:

The American decision is an aggression against our people. It’s a declaration of war against our Palestinian people,

Haniya has repeatedly been trying to incite an intifada. News stations like the BBC and al-Jazeera were almost gleefully reporting anti-Israeli marches and riots in countries from Indonesia to Germany.

But that was on the first day. By Saturday, the third day, almost all the protests appeared to have fizzled out, as reported by the BBC and al-Jazeera with a tone of disappointment.

A number of commentators tried to give reasons why the protests had fizzled out. They all gave some version of the following reasons:

These reasons are ironic because if the new intifada had taken off, and there were major Palestinian street protests with rioting and demonstrations, then the same analysts would have explained that with exactly the same list of reasons.

None of the news shows that I heard attempted to explain the logic of Trump’s proclamation, as he stated in his speech:

Presidents issued these waivers under the belief that delaying the recognition of Jerusalem would advance the cause of peace. Some say they lacked courage, but they made their best judgments based on facts as they understood them at the time. Nevertheless, the record is in. After more than two decades of waivers, we are no closer to a lasting peace agreement between Israel and the Palestinians. It would be folly to assume that repeating the exact same formula would now produce a different or better result.

Therefore, I have determined that it is time to officially recognize Jerusalem as the capital of Israel.

I’ve judged this course of action to be in the best interests of the United States of America and the pursuit of peace between Israel and the Palestinians. This is a long-overdue step to advance the peace process and to work towards a lasting agreement.

That is why, consistent with the Jerusalem Embassy Act, I am also directing the State Department to begin preparation to move the American embassy from Tel Aviv to Jerusalem. This will immediately begin the process of hiring architects, engineers, and planners, so that a new embassy, when completed, will be a magnificent tribute to peace.

In other words, as I have been saying for years, and as pretty much everybody knows by this time, there is zero probability that the “peace process” between Israel and the Palestinians is going to achieve anything. I had to laugh when one analyst was asked whether the peace process was already dead, said that was true, but Trump’s announcement makes it even less likely. I guess this analyst was not aware that if the probability of an event occurring is already zero, then it cannot go any lower, and so Trump’s proclamation would leave the chances of a successful peace process unchanged.

But carrying this logic one step further, if the probability of a successful peace agreement is zero, then the probability could go up, and Trump’s proclamation might change the politics in the region to make a peace treaty possible. That, in fact, is what Trump is claiming, and there are reports that the administration will be presenting a new peace plan soon.

Trump is using exactly the same kind of logic with respect to North Korea. After three decades of appeasement of North Korea, we are headed for a disaster when North Korea will have an arsenal of nuclear-tipped ballistic missiles pointed at the United States, which he will try to use in an extortion to gain control of South Korea, and he will sell the nuclear weapon and ballistic missile technology to rogue states like Iran and Venezuela. Trump’s tweets have been very aggressive and threatening toward North Korea, much to the dismay of the international community, but the objective is to try something different from the policies that have been failing for three decades.

Trump’s proclamation about Jerusalem and Trump’s tweets about North Korea could change the scenario by which the Generational Dynamics predictions occur, but the final outcomes cannot change. And no one can predict what will trigger the coming Mideast war. So it’s possible that Trump’s critics will turn out to be right, and that his proclamation will turn out to be the trigger for new street riots next week, and for the coming war. White House and Sky News and BBC and Times of Israel and Debka (Israel)

No Arab country could publicly support Trump’s proclamation, or even fail to criticize as the latest blow to Palestinian dreams. Doing so would create an enormous backlash within the Arab community. However, it is turning out that the proclamation has been splitting Arab countries along lines that we have seen before.

The key is Saudi Arabia. Officials representing Saudi Crown Prince Mohammed bin Salman (MBS) described the decision as “unjustified and irresponsible” and “a big step back in efforts to advance the peace process and is a violation of the historically neutral American position on Jerusalem.”

But behind the scenes, Saudi Arabia is said to be “on board” with the decision and the broader U.S. strategy. Saudi Arabia has for decades depended heavily on the United States and the west for security, which the West provides in exchange for a reliable supply of Mideast oil. Furthermore, MBS and Israel are becoming very strongly aligned with regard to what they see as their greatest common existential threat: Iran.

So Saudi Arabia has provided a muted criticism to the proclamation, and so have the UAE and Egypt. These are the countries that implemented a land, sea, and air blockade against Qatar last summer, and that blockade is still in place.

On the other side, we see Iran, Jordan, and Turkey harshly critical. These are the same countries on the other side of the Saudi blockade. Turkey’s President Recep Tayyip Erdogan said:

[Trump is] throwing the region into a ring of fire.

What do you want to do Mr Trump? What kind of an approach is this? Political leaders exist not to create struggles but to make peace.

When I can, I like to quote Marwan Bishara, the principal analyst from Qatar-based al-Jazeera, and clearly represents the Qatar position. Bishara hates Israel a great deal, but he hates the Palestinian Authority and Mahmoud Abbas even more because he sees them as traitors, selling out the Palestinians to Israel.

On Saturday, Bishara said that Saudi Arabia and Trump are going to give half of the West Bank to Israel, and that “The Saudis are sacrificing Palestine to create some sort of a front against Iran.” Reuters and Middle East Monitor and Reuters and Debka (7-Dec)