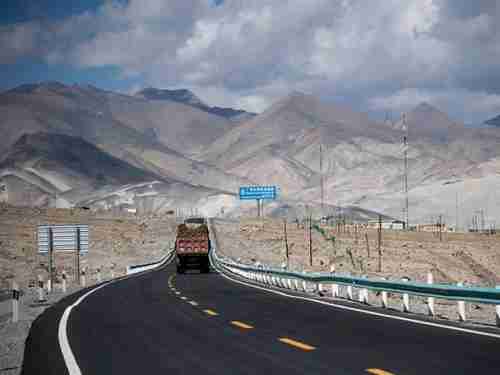 For economic basket case Pakistan, the benefits are obvious: a tsunami of money that will overwhelm its existing debt problems, for example allowing easy payment of the $6.1 billion that Pakistan owes to the International Monetary Fund (IMF).

The benefits are also obvious for China. The transportation networks from China to the Indian Ocean will connect China economically and militarily to its other ports and bases in the Indian Ocean, bypassing the risks of naval travel associated with problems like the South China Sea, the Straits of Malacca, and the waters around India.

But since the agreement was signed in March, China has become alarmed by the potential problems in two major areas: corruption and terrorism.

The CPEC project will bring thousands of Chinese workers into Pakistan, particularly into Balochistan, where most of the CPEC work will be performed.

As we reported in June, the ISIS-linked Al Alami offshoot of Lashkar-e-Jhangvi (LeJA) is believed responsible for the abduction and execution of two Chinese nationals working in Quetta, the provincial capital of Balochstan.

LeJ is a terror group that has vowed to exterminate all Shias in Pakistan and has carried out numerous terrorist actions targeting Shias and Sufis. But now LeJA is apparently turning its attention from slaughtering Shias and Sufis in Pakistan to the slaughter of thousands of Chinese workers and families who have come to Balochistan to work on CPEC.

Four days ago, China warned its Chinese citizens in Pakistan of plans for a series of imminent “terrorist attacks” on Chinese workers there:

It is understood that terrorists plan in the near term to launch a series of attacks against Chinese organizations and personnel in Pakistan.

The embassy alerts all Chinese organizations and citizens in Pakistan to stay vigilant, safeguard personal security, reduce time spent outside and avoid going to crowded places as much as possible.

There have been reports that China’s Uighur separatist group the East Turkestan Islamic Movement (ETIM) had “sneaked into Pakistan” and posed a threat to Chinese nationals.

On November 20, China issued “new guidelines” for the CPEC project, stipulating greater involvement of Pakistan’s army in the project to improve the security of Chinese nationals.

It is worth pointing out that Pakistan’s army has not been successful in preventing terror attacks on its own civilian population, and has been accused of distinguishing between “bad terrorists,” who perpetrate terrorist attacks within Pakistan, and “good terrorists,” who perpetrate terrorist attacks within India and Pakistan. It is possible that these “good terrorists” are now turning their attention to the thousands of Chinese workers moving into Balochistan, near the border with Afghanistan.

China halts CPEC funds over concerns about corruption in Pakistan

In a recent speech, Mohammad Zubair, the governor of Pakistan’s Sindh province, said that the world was witnessing a historic moment, thanks to China’s mega-investment plans, which will make Pakistan a regional leader. According to Zubair:

Pakistan’s economy was facing uncertain situation in 2013. The government worked day and night in its first three years to revive country’s economy and our hard work has put the economy on the path of prosperity. Pakistan Stock exchange is now the best stock exchange of region and its rise is a proof of the government’s successful economic policies.

So Pakistani officials were shocked on November 20, when China unexpectedly withheld funds for continuing development of three projects under CPEC, citing massive graft and corruption, and laid out “new guidelines” for how funds for the CPEC project will be disbursed. Previously approved financing will have to be resubmitted through new procedures before funds can be committed.

China has become alarmed by the volatility of Pakistan’s civilian government, including the dismissal of Prime Minister Nawaz Sharif on charges of graft and corruption, after some of his financial dealings were revealed by the Panama Papers. The terror threats against Chinese citizens in Pakistan is one reason why China is stipulating greater involvement of Pakistan’s military, while another reason is that China has lost faith in the civilian government and wants the army to take responsibility for the project.

According to an analyst:

Had corruption been the reason behind the Chinese step (to block funds), it would, or perhaps should, have happened in July, when in the context of the Panama Papers, the former Pakistani Prime Minister Nawaz Sharif and his relatives were charged with financial irregularities and corruption, which prompted the Pakistani Supreme Court to declare Nawaz Sharif ‘unfit’ for political office, resulting in his dismissal from the Office of the Prime Minister of the country.

Despite the temporary cutoff of funds, a Chinese official visiting Islamabad sought to reassure Pakistanis that all was well and that China wanted to build “a clean corridor, a corridor of integrity”:

I want to express our strong conviction and determination to press ahead the CPEC to deliver more benefits to the people of Pakistan.

We want to build a CPEC that is a clean corridor, a corridor of integrity.

We should also guard against the interference from external forces and also prevent the domestic disturbances … to promote the CPEC construction, so that we can make CPEC a pathway of common development, a pathway of shared fruits and the shared future.

The unexpected cutoff of funds was a strong message to Pakistan that China is paying the money, and China is dictating the terms, and the project will be done China’s way or not at all. Dawn (Pakistan) and Daily Times (Pakistan) and Times of India and Express Tribune (Pakistan)

As time goes by and the euphoria about China’s $55 billion investment in Pakistan begins to wear off, some people are beginning to wonder if CPEC will actually be a financial disaster for Pakistan.

We have already described what happened with Sri Lanka, when China invested $1.2 billion in Sri Lanka’s Hambantota seaport in 2009. The plan was that revenue generated by the seaport would be used to repay the Chinese, and the surplus would bring wealth and happiness to all Sri Lankans. It did not turn out that way, and the project turned out to be a “debt trap.” Sri Lanka could not repay the loan, and now China has taken control the seaport and the surrounding area. It has been a disaster for Sri Lanka.

China’s CPEC investment is supposed to be paid off the same way. The CPEC projects would generate revenue from trucks carrying goods along the CPEC roads and highways. According to analyst estimates, this turns out to be a fantasy, based on the most optimistic assumptions possible, just as happened with the Sri Lanka seaport project. If any of these super-optimistic assumptions fail, which is what usually happens in real life, then Pakistan’s current debt of $6.1 billion to the IMF will look like chicken feed. Instead of being a financial bonanza, the debt burden will crush Pakistan’s economy.

The IMF has examined the CPEC plans and is said to be “appalled” at the implications of the project. Its main concern was that Pakistan’s repayment capacity will remain weak, as the IMF does not see any major increase in exports in the near future. Express Tribune (Pakistan) and Express Tribune (26-Oct)