In one of the least likely stories of all time, Facebook has vetoed a photo of the Vatican’s yearly Nativity scene, referencing its policy against “sexually suggestive or provocative” images.

The manger scene integrates into the typical depiction of the Holy Family in Bethlehem, a series of vignettes highlighting the corporal works of mercy: feeding the hungry, visiting the sick and imprisoned, burying the dead and clothing the naked.

It was this last element that excited the censors at Facebook with its portrayal of a naked man being offered clothing by a charitable pilgrim.

An ad featuring the image of the scene was rejected by Facebook with the following justification: “Your ad can’t include images that are sexually suggestive or provocative.” The image in question was simply a photo of the naked man in the Vatican’s nativity scene. 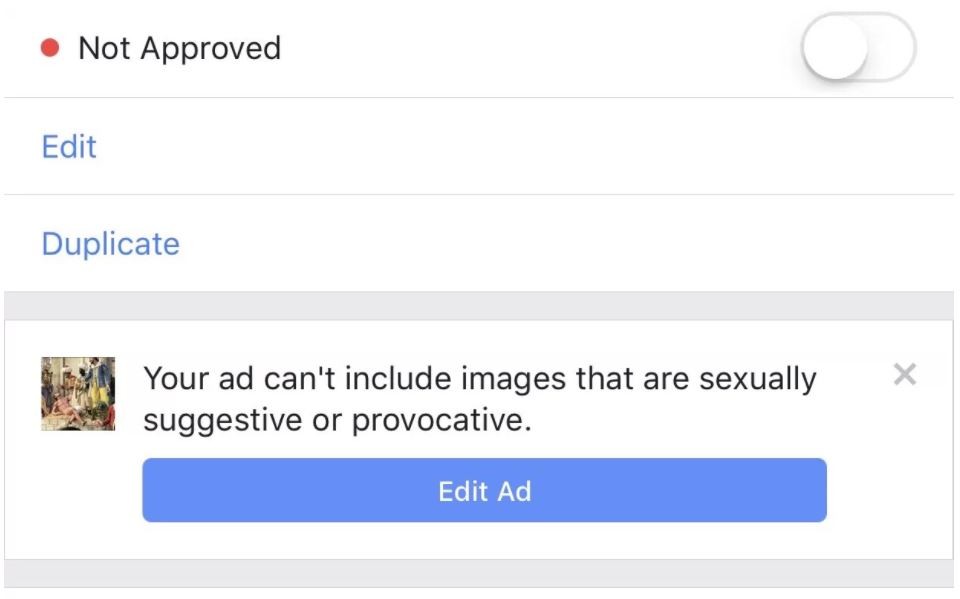 In his explanation of the crèche, Pope Francis said: “This year’s Nativity scene, executed in the typical style of Neapolitan art, is inspired by the works of mercy. They remind us that the Lord has told us: ‘Whatever you wish men to do to you, you also do to them’ (Mt 7.12). The crib is the suggestive place where we contemplate Jesus who, taking upon himself the miseries of man, invites us to do likewise, through acts of mercy.”

Nonetheless, the innovative Nativity scene—with its departure from traditional depictions of the Bethlehem stable or cave—elicited reactions from others besides the folks at Facebook.

One thoughtful commentator noted how “of all the seven works of Corporal Mercy, the one that most jumps to the eye is that of the ‘clothing the Naked,’” both because of its prominent placement and the figure’s languid pose. The latter, he adds, led many on social media to suggest that there is a vaguely homoerotic tone to the scene.

The “corporal works of mercy ,” huh? Looks to me like an excuse to openly flaunt homoerotica!

More distressing still, the same author observes, is the relative obscurity of the main character in the scene, namely the child Jesus. One must strain to find him amidst the jumble of all the other things going on in the scene.

The creator of the work, Antonio Cantone, seemed to suggest that he intended just such reactions.

“It is not a campy nativity; it is particular and makes you think,” he said. “It leaves no one indifferent; there are provocations.”