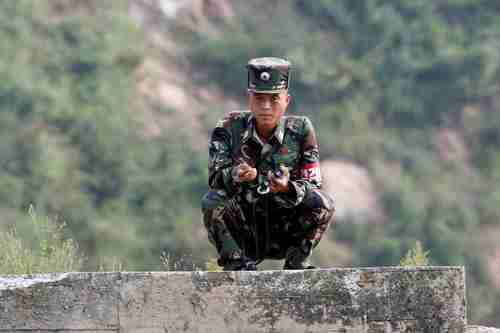 Chinese government advisers are warning that “North Korea is a time bomb,” and China must prepare for an unpreventable nuclear war on the Korean peninsula. China used to be able to control the North Korean government, but it was losing control, and “Northeast China should mobilize defenses for war.”

Shi Yinhong, a university professor that advises the Beijing government, says that nuclear war is inevitable:

Conditions on the peninsula now make for the biggest risk of a war in decades.

North Korea is a time bomb. We can only delay the explosion, hoping that by delaying it, a time will come to remove the detonator.

The logic behind this claim is similar to the same logic that many American analysts have been using, and the same logic that I have been writing about. North Korea will not be dissuaded from its goal of having an arsenal of nuclear-tipped ballistic missiles pointed at the United States, which he will use in an extortion to gain control of South Korea, and he will sell the nuclear weapon and ballistic missile technology to rogue states like Iran and Venezuela. Trump will not allow this to happen, and so one way or another a war will begin in the next 6-18 months.

Nanjing University professor Zhu Feng said that no matter how minor the possibility, China should be prepared psychologically and practically for “a catastrophic nuclear conflict, nuclear fallout or a nuclear explosion”:

What China needs is a sense of urgency about its declining influence in strategy related to the peninsula and the way it brings down China’s status and role in East Asian security issues.

A recent video went viral showing North Korea’s child dictator Kim Jong-un standing next to an untested liquid-fueled missile. The video prompted a torrent of tweets expressing regret that Kim’s lit cigarette had not “solved the problem for us.”

The video illustrates the fact that North Korea does not take seriously the need to operate its nuclear reactors safely, as Western nations and China do. Even a small nuclear accident that could normally be contained could turn into a catastrophic disaster if North Korea did not respond quickly and correctly.

Even a small nuclear accident would generate widespread panic as word began to leak out, because of North Korea’s lack of transparency and the fact that they would deny that anything is happening. In the case of Japan’s Fukushima nuclear reactor disaster, Japan was completely transparent about what was going on, but there was still public panic. After a disaster in North Korea, the regime would suppress all reporting of the incident, and they would probably refuse help from outside countries. The resulting panic would spread into China, South Korea and Japan. 38 North and South China Morning Post