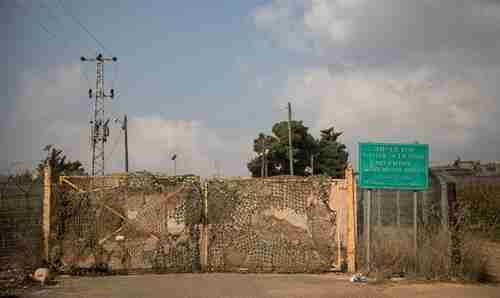 The combined forces of Syria’s army and Iran-backed Hezbollah militias are fighting to take control of Beit Jinn, in the expectation that that its fall would also have a domino effect on all the Sunni anti-Assad militias in the entire Quneitra region of the Syrian Golan, allowing Iran and Hezbollah to mass forces in Syria on Israel’s border. Beit Jinn is about 11 km from Israeli army positions on Mt. Hermon in Israel, while Quneitra is 5.5 km from the Israeli border.

On one side are the army of Syria’s president Bashar al-Assad, combined with militias from Iran-backed Hezbollah, and apparently supported by Druze militias in the region, for a total of several thousand fighters, backed by heavy aerial bombing and heavy artillery shelling.

On the other side are a combination of Israeli-backed “moderate” Free Syrian Army (FSA) anti-Assad Sunni rebels, combined with Sunni fighters from formerly al-Qaeda linked Hayat Tahrir al-Sham (HTS), for a total of several hundred fighters. The combined Sunni forces are fighting under the banner of Itihad Quwt Jabal al Sheikh, or “Union of fighters of Jabal al Sheikh,” and they are mainly drawn from local fighters from the area.

The Sunni groups are denying that they’re close to surrender. According to an official from one Sunni group, “The Iranian-backed militias are trying to consolidate their sphere of influence all the way from southwest of Damascus to the Israeli border.” Reuters and Israel National News and Al Manar (Hezbollah) and Debka (Israel)

With the collapse of the so-called Islamic State (IS or ISIS or ISIL or Daesh) in both Iraq and Syria, and with Russia’s recent announcement that it was going to remove most of its forces from Syria, Iran is moving to consolidate its control over parts of both countries. Two objectives are, first, to establish a land highway from Tehran (Iran) to both Damascus (Syria) and Beirut (Lebanon), and second, to establish an Iranian military base in southern Syria near the Israeli border. A further objective would be the eradication of the “Zionist regime.”

In November, Israel’s foreign minister Avigdor Lieberman said that Israel will feel free to act in any way it wants in Syria, in order to defend its own security, and particularly to prevent Iran from establishing a military base in Syria:

We maintain absolute freedom of action and the only considerations that guide us are the security considerations of Israel. … With regards to Iran, we will simply not allow for Shi’ite consolidation and Iranian entrenchment in Syria nor will we allow Syria to become a forward operating base against the State of Israel. Anyone who has yet to understand that is advised to do so.

A report in November said Iran is establishing a permanent military base outside Al-Kiswah, located 14 kilometers (8 miles) south of Damascus. Early in December, there were airstrikes attributed to Israel on Al-Kiswah and other targets around Damascus.

Well, I wouldn’t put a percentage on that, but I think it is higher than people think because of Iran’s continued push through the region. If Iran is not rolled back in Syria, then the chances of military confrontation are growing. I don’t want to tell you by the year or by the month. I’d say even by the week.

Because the more they push, we have to enforce our red lines, and you always have the prospects of an escalation, even when parties don’t want an escalation because we will not allow Iran to establish that presence and establish another terror front against Israel in Syria. We’re not going to allow it to happen. So in taking action to defend ourselves, you don’t know what could happen. But I think it’s higher than people think.

The last major clash between Israel and Hezbollah occurred in 2006. The war was triggered when two Israeli soldiers were ambushed and kidnapped while on patrol near the border with Lebanon. Israel panicked and launched the Lebanon war with Hezbollah within four hours, with no plan, no objective, and no idea what was going on. The war that was considered disastrous for both sides. Jerusalem News Service and Meir Amit Intelligence Center and Reuters (12-Nov) and Politico