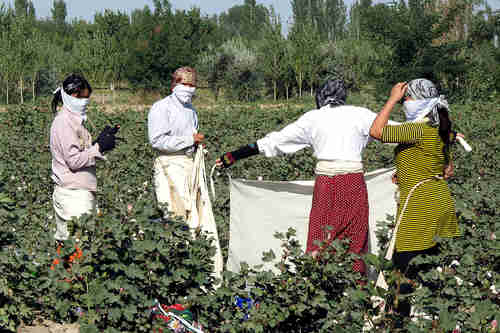 Uzbekistan’s new leader Shavkat Mirziyoyev is sacking senior security officials in the corrupt and bloody National Security Service (NSS), the local successor to the Soviet KGB, and has promised to reform economic reporting, saying that reported figures for economic growth and employment had been “fiction” for years.

Mirziyoyev’s predecessor was Islam Karimov, a vicious, corrupt dictator who had been in power since 1991, and who died a year ago at age 78 after suffering a stroke.

Karimov ruled over a deeply corrupt system of wealth distribution among powerful clans, involving nepotism and cronyism. The population was kept in line by forced labor, mass arrests, torture and repression.

Mirziyoyev has been in office for 15 months and has promised hope and change in several areas, including liberalizing the economy and ensuring security, interethnic harmony, and religious tolerance. However, he has said nothing about strengthening the public’s role in the political process, or of improvement in human rights or allowing independent media. Reuters and RFE/RL and Reuters and RFE/RL

Rise of Islamic radicalism and the Islamic Movement of Uzbekistan (IMU)

Under Karimov, the region has seen Islamic radicalism in the form of the Islamic Movement of Uzbekistan (IMU) in the densely populated and restive Fergana (Ferghana) Valley. The Fergana Valley lies in three separate countries. It consists of eastern Uzbekistan, part of northern Tajikistan and part of southwestern Kyrgyzstan. It is the most densely populated region of Central Asia and has been plagued by frequent ethnic and religious conflict since the Soviet breakup.

Following a wave of jihadist terror attacks in March 2004, 23 Muslims were put on trial on terrorism charges. In May 2005, Some 10,000 Muslims in Andijon (Andizhan) in the heart of the Fergana Valley began protesting the trial peacefully. However, the demonstrations turned violent when armed protesters attacked the prison, freeing dozens of prisoners, including the 23 Muslims on trial. Government soldiers moved in and fired on thousands of protestors, killing 500 people and causing thousands of refugees to flee Andijon and cross the border into Kyrgyzstan.

Since then, the IMU has become increasingly radicalized. Its initial goal was to turn the entire Fergana valley into a caliphate, but it was drawn into the Afghanistan war by the American intervention and has cooperated to some extent with the Taliban in executing terrorist attacks in both Pakistan and Afghanistan. Although originally allied with al-Qaeda, the IMU has changed allegiance to the so-called Islamic State (IS or ISIS or ISIL or Daesh).

The current objectives of the IMU are currently unclear, but using the IMU as a reason, Karimov has fueled resentment towards the government through mass arrests. Protest has been unheard of because the National Security Service (NSS) is so feared, but now the new leader Shavkat Mirziyoyev is vowing to bring the NSS under control. Mirziyoyev is starting by firing some senior level officers, but whether anything will really change remains to be seen.

It is believed that hundreds of Uzbeks are in Iraq and Syria fighting with ISIS and other jihadist groups. With the continuing demise of ISIS in Iraq and Syria, it is possible that some of these will return to Uzbekistan and join with local insurgents to pose an internal threat to the country.

Jihadists from Uzbekistan have occasionally perpetrated terrorist acts in other regions.

An Uzbek citizen was arrested in Sweden in April when he ran a truck into a crowd in Stockholm and killed four people. The suspect had been denied a request for residency in Sweden and expressed sympathy with the ISIS. Two Uzbeks and a Kazakh were arrested in Brooklyn in 2015 and charged with conspiring to support ISIS.

Sayfullo Saipov, a 29-year-old citizen of Uzbekistan, was arrested immediately after killing eight people by speeding a rental truck down a New York City on October 31. Saipov came to America in 2011, and in 2013 was married in Ohio to a 19-year old girl, Nozima Odilova, who is also from Uzbekistan. They have two children. Saipov was apparently radicalized while in the United States.

Uzbekistan’s president Shavkat Mirziyoyev immediately acknowledged the violence and expressed his condolences, writing to President Trump, “Uzbekistan is prepared to provide all measures and means to assist in the investigation of this terrorist act.”

Under Karimov, Uzbekistan has been a U.S. partner in the fight against terrorism, and the US has also used Uzbekistan as a strategic location to bring goods and military equipment into Afghanistan. That is expected to continue under Mirziyoyev. Crisis Group (29-Sept) and EurasiaNet (1-Nov) and Newsweek (31-Oct) and The Atlantic (1-Nov)

Who’s going to pick the cotton in Uzbekistan?

Uzbekistan became a cotton-producing powerhouse in the twentieth century for an ironic reason.

In the mid-1800s, the Russians invaded Uzbekistan. Russia had lost its supply of cotton from the southern United States because of the American Civil War, and the Russians wanted to establish a safe source of cotton, and so they developed a large cotton-producing agriculture in Uzbekistan.

As part of Stalin’s Soviet Union, Uzbekistan became a cotton powerhouse starting in the 1920s. In support of the cotton trade, millions of ethnic Russians began pouring into the country, especially into the fertile Fergana Valley (or Ferghana Valley), in the far eastern portion of the country.

Since 1991, it has become standard practice by the government to use forced labor to pick the cotton. Theoretically, it was voluntary, but in practice the government forced teachers, doctors, and students, including children, to leave hospitals, schools, and universities and go to the cotton fields.

The new president, Shavkat Mirziyoyev, has vowed to end forced labor and has issued a decree categorically banning the use of children, along with education and healthcare workers, in the harvest. These people were sent home right in the middle of this year’s cotton harvest, much to their surprise.

However, as analysts point out, cotton is an existential crop for Uzbekistan, and somebody has to pick the cotton, and now other groups are picking cotton as part of a new wave of forced labor.

The long-term plan is to attract voluntary cotton-pickers through higher wages and to mechanize the harvest through 15,000 harvesting machines. Whether this will be done remains to be seen, but in the meantime, forced labor is still being used to pick the cotton. EurasiaNet (31-Oct)