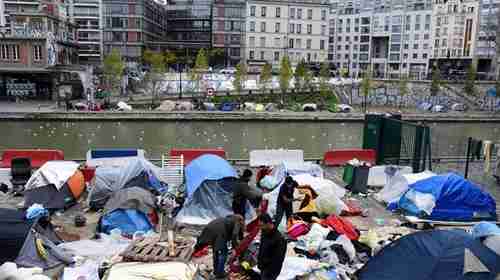 France registered over 100,000 migrant asylum requests in 2017, the highest number in over four decades, up 17 percent from the previous year, though officials say they are not overwhelmed and can cope with the situation. This compares to a 16 percent rise in 2016.

Ironically, the greatest number of migrants come from within Europe itself. Albania tops the list of countries of origin with 7,630 requests, up 66 percent from the previous year. Afghanistan is second with 5,987 requests, followed by Haiti with 4,934, Sudan with 4,486, and Guinea with 3,780 asylum requests.

Germany receives a greater number of asylum requests, and expects to receive 200,000 requests in 2018. Reuters and France 24 and YeniSafak (Turkey) and Exit (Albania)

However, because the volume of asylum seekers coming from Albania is so large, France is threatening to advocate a return to the Schengen visa regime for Albania and to veto any further negotiations over joining the EU. Germany and the Netherlands have made similar threats.

Albania has long been the poorest country in Europe, and in 2016 had a GDP per capita of about $4,100, according to the World Bank. This is the reason that so many young people in Albania wish to migrate to other European countries and, in fact, figures from the IMF indicate that 2/3 of young people in Albania intend to leave Albania for another country, if they can.

The problem for these young people is that although, currently, they can travel to other European countries without a visa, they can only remain for a limited time, and they do not qualify for asylum. Since the European Union has declared that Albania is a “safe country of origin,” all migrants from Albania are considered to be “economic migrants,” who do not qualify for asylum.

The ‘Jungle’ is closed in Calais France, but the migrants aren’t gone

The “Jungle” was the migrant camp in Calais, France, where migrants would come in the hope of reaching Britain. France closed the Jungle camp in October 2016, and have done everything possible to prevent the creation of a new migrant camp.

Nonetheless, there are still about 500 migrants and asylum seekers living on the streets and in wooded areas in and around Calais, according to Human Rights Watch, and about 100 are unaccompanied children. Most of them are from Eritrea, Ethiopia, and Afghanistan.

According to HRW, French riot police have been confiscating or destroying asylum seekers’ and other migrants’ personal belongings, such as sleeping bags, blankets, clothing, and sometimes phones, medication, and documents.

According to HRW: “The ongoing police violence and destruction and confiscation of people’s belongings is inhumane and unconscionable. The French authorities should immediately put an end to these abuses and ensure that migrants are treated with the dignity to which every human being is entitled.” Human Rights Watch