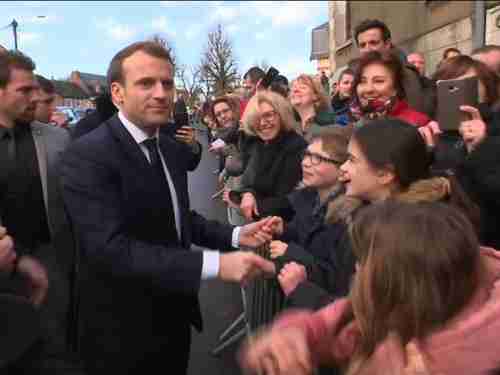 France’s president Emmanuel Macron visited the port city of Calais on Tuesday, in preparation for a visit to meet Britain’s prime minister Theresa May in London later this week.

Calais is significant because it has the entrance to the Channel Tunnel that provides auto and rail connections through the English Channel to Dover in England. In recent years, refugees from numerous countries – including Syria, Afghanistan, Eritrea, Ethiopia, and Sudan – have made their way there illegally, often by paying exorbitant rates to human traffickers, in the hope of finding a way to reach Britain and apply for asylum there.

Calais became the home of a huge migrant camp called “The Jungle,” housing 7,000 migrants. French authorities shut the camp down in October 2016, forcing the migrants to disperse or to be housed in refugee centers in other parts of France. In the refugee centers, they could apply for asylum and remain in France if the application was accepted, or be deported to their home countries if the application was rejected. In 2017, there were 100,000 asylum applications in France, 17 percent higher than in 2016. Among refugees whose asylum applications are rejected, reports indicate that only 20-30 percent are actually deported.

The Jungle camp was shut down by Macron’s predecessor François Hollande, but Macron has vigorously adopted policies to prevent any sort of camp to reemerge. Macron’s policies have been so harsh that some pro-refugee activists are comparing Macron unfavorably to the hated former anti-immigrant president Nicolas Sarkozy.

According to various reports, police are treating refugees brutally. Materials such as sleeping bags and covers are being confiscated and thrown out. Refugees are prevented from sleeping in the open, so they have to run into the woods and sleep there. Sometimes the police spray food with teargas so that it become inedible.

According to Macron during Tuesday’s visit to Calais:

There will be no reconstruction of the Jungle and no tolerance for the illegal occupation of public space. … We have a responsibility to protect those who are in danger, [but] we can’t welcome millions of people who live in peace in their countries.

However, Macron’s critics say that he is badly out of touch. According to Olivier Brachet, a judge who specializes in asylum cases:

Prime ministers and presidents have been saying that already for thirty years. That is not where the problem lies. The problem is sending back irregular migrants to their country. There are no bilateral solutions. In fact, there are only European solutions. Because individual countries are not going to lift a finger by saying, ok, we agree, we’ll take them.

At present, there are still nearly 1,000 people in the region, camped out in one way or another, with 700 migrants estimated in Calais, and a further 300 or so in nearby Dunkirk. RFI and Sky News and Reuters

The Le Touquet Agreement was signed in February 2003 by then-French Minister of Interior Nicolas Sarkozy and his British counterpart David Blunkett. In many ways, it is quite novel. It grants a small region of France’s land to Britain so that Britain can set up border controls on the French side of the English Channel, rather than on the British side.

It is worth noting that the Le Touquet Agreement is a bilateral agreement between Britain and France, and so it is not affected by Brexit. However, it is becoming a bit of leverage to be used by France to gain concessions from Britain in the Brexit negotiations.

According to Calais mayor Natacha Bouchart:

We are the ones suffering the economic consequences of the [Le Touquet] border deal, which the British have no intention of renegotiating.

Aid workers try to help them, and there are local shelters where they can seek assistance. But most don’t want our help. They put themselves in awful situations and don’t want anything from France.

There are between 400 and 600 migrants in Calais. They want to go to the UK and are always making trouble. They stop drivers and jump into UK-bound bound lorries.

They storm the ring road leading to the port and attack riot police using metals bars and heavy objects, risking their lives and the lives of locals. … The local population is tired of this situation, it’s unacceptable.

The Treaty of Touquet has to be re-negotiated. We cannot satisfy ourselves with a British government that just helps us to keep its own security. They have to give economic compensation to the city of Calais and to its projects.

Reports indicate that, because of Macron’s demands, Britain has already agreed to renegotiate the agreement, and in particular has agreed to increase its financial contributions. France’s interior minister Gerard Collomb said, “Our understanding is that they will pay more. The question is how much and for what.”

There are further discussions of a “Franco-British operational task force,” which will be responsible for managing all the migrants on the French side, and Britain will also be required to accept more migrants than it has in the past.

It is believed that neither side has any appetite for abandoning the Le Touquet Agreement altogether, as Calais would immediately become a magnet for thousands more migrants wishing to travel to Britain. France 24 and Express (London) and Telegraph (London) and PDF: Text of 2003 Le Touquet Treaty