Turkey begins its air and ground invasion of Syria’s Afrin 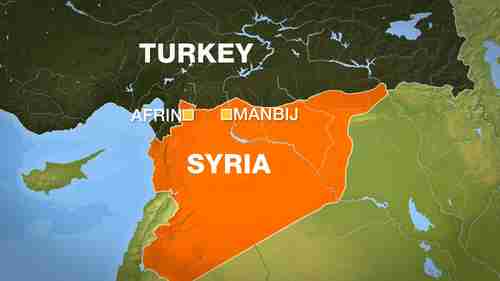 While we are stuck with suffering through the unbelievably pathetic clown circus going on in Washington, there are actual things going on in other parts of the world.

Russia says that it has moved its 300 or so troops out of Afrin to safety. Russia, which controls the airspace over Afrin, is not stopping Turkey’s airstrikes, indicating that Russia is giving tacit approval to Turkey’s operation.

Turkey’s own troops have not crossed the border into Syria, although there have been reports of trucks carrying Turkish tanks crossing the border to Afrin. Turkey would have no reason to commit its own troops unless the FSA troops started getting bogged down.

Turkey’s president Recep Tayyip Erdogan says that, after Afrin, the next target will be Manbij. Although Manbij is west of the Euphrates River Valley, there are American units in the region, so a clash with Americans would be a possibility, although it is likely that both sides would do everything to avoid it.

In a speech on Saturday, Erdogan said:

The promises made to us over Manbij were not kept. So nobody can object if we do what is necessary.

Later we will, step by step, clear our country up to the Iraqi border from this terror filth that is trying to besiege our country.

This refers to several American promises that were not kept. The Americans promised that the YPG would be armed and trained only until the so-called Islamic State (IS or ISIS or ISIL or Daesh) was defeated in Raqqa, but is continuing to arm and train YPG fighters for its Border Security Force (BSF). The Americans promised that they would withdraw as soon as ISIS was defeated, but now are saying that they will stay indefinitely, rather than risk repeating the blunder made with the 2011 withdrawal from Iraq.

Turkey’s ground invasion is highly risky. Both the FSA militias and the YPG militias are battle hardened, and the victory in Afrin may not be as quick as Erdogan is fantasizing. Hurriyet (Ankara) and Al Jazeera and Hurriyet 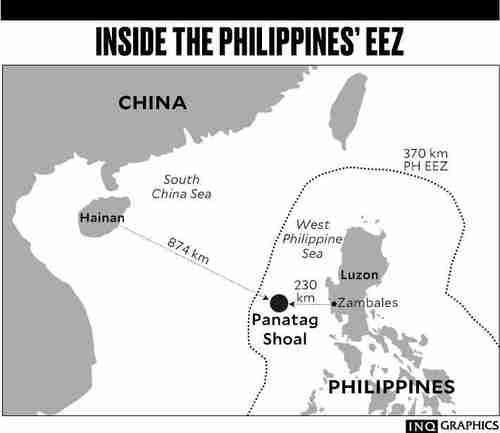 Map showing that the Scarborough (Panatag) Shoal is far from China, but within the Philippines EEZ (Inquirer)

According to Lu Kang, the spokesman for China’s foreign ministry:

On the night of January 17, the USS Hopper missile destroyer sailed within 12 nautical miles off China’s Huangyan Dao [i.e., the Philippines’ Scarborough Shoal] without gaining permission from the Chinese government.

China has indisputable sovereignty over Huangyan Dao [Scarborough Shoal] and the adjacent waters.

Lu Kang is a serial liar. Whether the subject is Doklam Plateau, the South China Sea, Taiwan, or North Korea, Lu Kang says any nonsense he wants, with no regard for the facts.

China has no sovereignty whatsoever over the Scarborough Shoal. It is within the Exclusive Economic Zone (EEZ) of the Philippines, as shown by the above map. In 2016, Lu Kang and China were completely humiliated when United Nations Permanent Court of Arbitration in the Hague ruled that all of China’s claims in the South China Sea were hoaxes and lies.

Even the word “indisputable” is a lie on its face. Obviously, China’s claims are disputable, have been disputed, and have been shown to be false. Lu Kang is a serial liar.

The United States conducts routine and regular FONOPs [Freedom of Navigation Operations], as we have done in the past and will continue to do so in the future.

We have a comprehensive FONOP program under which U.S. forces challenge excessive maritime claims across the globe to demonstrate our commitment to uphold the rights, freedoms and lawful uses of the sea and airspace guaranteed to all nations under international law. FONOPs are not about any one country, nor are they about making political statements. FONOPS are designed to comply with international law and not threaten the lawful security interest of coastal States.

That the US simply ignores China’s false claims in the South China Sea is undoubtedly very humiliating to the Chinese, who become infuriated whenever anyone challenges their false claims.

This is the second time this week that the Chinese were humiliated by an American action. The US and Canada co-sponsored an international meeting to discuss the North Korea crisis, and China was totally infuriated that it was not invited to attend. Foreign Ministry of China and Inquirer (Manila) and ABC News

The following is a summary of the major Generational Dynamics predictions that I have posted in the past. None of this is new, except that all of these predictions are listed together in one place. These predictions have been essentially unchanged for over ten years.

First, by way of introduction, although I sometimes call myself the gloomiest person in the world, it is worth noting that there are other forecasts that are gloomier than mine. These include the following:

So my oft-stated Generational Dynamics predictions are these: