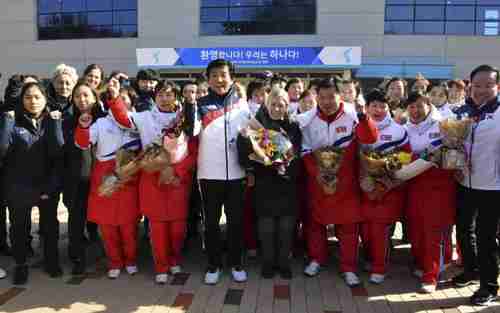 Mainstream journalists, analysts and economists are generally incapable of grasping even the simplest generational concepts, so on the extremely rare occasion when a major publication publishes an actual generational analysis, it is worth noting.

An article in the NY Times by Choe Sang-Hunjan titled “Olympic Dreams of a United Korea? Many in South Say, ‘No, Thanks’” gives a generational analysis of South Korea as the Winter Olympics games approach and the changing attitudes to reunification of different South Korean generations.

The article quotes surveys that show a big gap in attitudes between younger and older South Koreans:

The article quotes a former South Korean foreign minister: “I am taken aback. Young people seem to think of North Korea as strangers who barge into their party bringing with them nothing but empty spoons.”

The current left-wing South Korean president, Moon Jae-in, has long supported unification, driven by his personal desire to see his birthplace in the North.

According to the article:

Key members of Mr. Moon’s presidential office and governing party are progressives in their 50s, who went to college in the 1980s. Then, campuses were rife with anti-American activism, partly driven by resentment over the division of the Korean Peninsula after World War II. Students defied the authorities by sending a “unification envoy” to the World Festival of Youth and Students, alternative games that North Korea held in Pyongyang in 1989 to counter the previous year’s Summer Olympics in Seoul.

Progressives in that era believed in a peaceful process of reunification, built on the expansion of economic and social exchanges. Today, many of that generation see the North’s nuclear weapons program as a desperate attempt to protect itself from the United States and the South, with which it is still technically at war.

These paragraphs need a bit of interpretation. As I’ll explain in detail below, what the article calls 1980s “progressives” are known as the “386 Generation” of the 1980s – affluent, highly pro-Leninist-Marxist and highly anti-American, since they had no memory of their parents’ extreme poverty and destitution, nor of how an American military intervention saved South Korea from the North in 1950.

However it is true, as the article points out, that the 386er generation strongly believed that the communist government of North Korea was superior to Western democracies and that the South and the North could be unified peacefully if only the South could adopt that same kind of government. Events since then, especially “the fiasco of the 386 generation” (described below), and North Korea’s unstoppable nuclear missile development, have forced the 386ers to abandon those extreme radical views, and look for opportunities for peaceful negotiations. The 2018 Winter Olympics games are the best opportunity so far. NY Times (or Open version)

On Monday, North Korea abruptly canceled a joint cultural event to be held on February 4 in the North Korean territory of Mount Kumgang. The plan had been for skiers from both sides to train in North Korea’s Masikryong Ski Resort.

The North blamed the South Korean media for encouraging “insulting” public sentiment regarding the North. There were no specifics given, but South Korea has a free press, and there has been a lot of criticism of North Korea. There have also been individual protests, including burning a picture of North Korea’s dictator Kim Jong-un, which would be a capital offense if done in North Korea. However, it is not known whether those were the problem.

It is suspected that the North is angry about media coverage of North Korean plans to stage a large military parade in Pyongyang on February 8, just before the start of the Olympics. Some media reports say that some 50,000 North Korean soldiers will march in the parade, which will feature the latest in North Korean weapons, including ballistic missiles. These reports may be the reason why they canceled the cultural event.

It is very regrettable that an event agreed by the South and the North will not be held due to North Korea’s unilateral notification (decision). What has been agreed must be implemented under the spirit of mutual respect and understanding as the South and the North have only taken a hard-earned first step toward improving the South-North relationship.

The North Korean regime will probably be removed from the map if it uses developed nuclear weapons against South Korea or the United States.

It’s an anachronistic idea that North Korea will use nuclear weapons for the unification (of the two Koreas).

It is certain that there will continue to be some hostile media coverage, and it is certain that there will be anti-North protesters before and during the games. This media coverage will be interpreted by the North as threatening their new strategy of using the Olympics to drive a wedge between South Korea and the US. Whether they become so infuriated that they start canceling other events, or even their entire participation in the games, remains to be seen. Yonhap News (Seoul) and Reuters and UPI and The Hankyoreh (Seoul) and Yonhap News (Seoul)

In an article that I wrote in 2007 ( “South Korean politicians are ‘euphoric’ over North Korea nuclear deal”), I included a brief generational history of South Korea. The following is an update.

Korea is one of the oldest nations on earth, with some 4000 years of history. Here we can only give a brief summary of its extremely tumultuous history in the 1900s:

That 2007 article was written in response to conciliatory policy changes by the George Bush administration, resulting in euphoria on the part of South Koreans. In that article, I quoted a BBC correspondent, Charles Scanlon in Seoul, who described the euphoria as unrealistic:

We are seeing something approaching euphoria, from at least among some members of the South Korean government, in reaction to this agreement that was signed in Beijing.

The Unification Minister who’s responsible for relations with the North said this could be a turning point in the establishment of a peace regime on the Korean peninsula.

And certainly the South Koreans do feel to some extent vindicated by what has been in effect a major change in U.S. policy toward North Korea.

They’ve been urging a more conciliatory approach from the very beginning, and they’re certainly very relieved that the Americans now do seem serious about getting a negotiated settlement with the North Koreans, and they’ve softened some of their pressure tactics.

The president, Roh Moo-hyun, said he’s expecting a very easy implementation of this accord.

I think there we are seeing really wishful thinking on the President’s part, because after all any agreement with the North Koreans is not going to come easy.

I don’t know whether the current president Moon Jae-in personally feels euphoria about the new Winter Olympics détente, but as we have described, the young generation of South Koreans feel little but anger. The controversy has sent South Korean President Moon Jae-in’s overall approval rating below 60 percent for the first time since he took office in May last year, dropping more than 6 percentage points in one week. Korea Times (5-Feb-2008) and Meng News (3-Jun-2014)