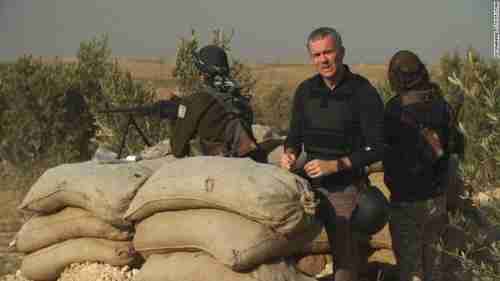 CNN goes on patrol with US soldiers in Syria

The war in Syria may have gotten even more chaotic on Thursday when US-backed Syrian Defense Forces (SDF), backed by U.S. warplanes, clashed with pro-regime Syrian army forces and allies. The pro-regime forces launched a massive, coordinated attack on the SDF, and were driven back with the aid of U.S. warplanes.

The US had been observing the buildup of the pro-regime forces for several days, as they prepared for this assault on the SDF. During that period, the US forces contacted the Russians over an established “de-confliction” hotline that was set up to prevent such clashes. However, the pro-regime forces attacked anyway, and the SDF forces counter-attacked in self-defense.

According to Pentagon spokesman Dana White:

After 20 to 30 artillery and tank rounds landed within 500 meters of the SDF headquarters, the Syrian democratic forces , supported by the coalition, targeted the aggressors with a combination of air and artillery strikes,

Coalition advisors were with the SDF, and this action was taken in self-defense. Pro-regime vehicles and personnel that were turned around and headed back west were not targeted.

The Syrian regime attack on the SDF took place to the east of the Euphrates River, where U.S.-backed forces have been continuing to fight forces from the so-called Islamic State (IS or ISIS or ISIL or Daesh) that had been expelled by the SDF from their self-described caliphate in Raqqa.

According to the Pentagon, an estimated 100 regime fighters were killed, out of a total of regime fighters, who were backed by artillery, tanks, multiple-launch rocket systems and mortars in the assault.

The Syrian regime said that the US-backed forces had committed a “barbaric aggression” representing a “war crime”:

This new aggression, which represents a war crime and a crime against humanity and a direct support to terrorism, affirms the nature of the low US intentions against the sovereignty of Syria, the unity of its land and people and the US exploitation of the pretext of fighting terrorism to establish illegal bases on the Syrian territory.

With the Syrian regime dropping barrel bombs containing metal laced with chlorine gas on women and children in Eastern Ghouta and Idlib, it is really laughable for the regime to accuse anyone of anything. According to one doctor, “Ghouta is drowning in blood,” where, on the same day, Thursday, 100 people were wounded and at least 14 killed, including a rescue worker and several children. Syria’s president Bashar al-Assad is still the worst genocidal monster so far in the 21st century. RFE/RL and Dept. of Defense and Syrian Arab News Agency (SANA) and Guardian (London)

Regular readers will recall that, for the last two years, it has been apparent that Syria, Turkey, Iran, Hezbollah, and the SDF were all fighting ISIS, but that as soon as ISIS was defeated, they would start fighting each other.

So you have the Syrian civil war between the regime plus al-Assad plus the Russians plus Iran plus Hezbollah versus the “anti-Assad rebel” resistance force. You also have the Turks fighting against the Kurds, where the fight in Afrin continues to drag on. And you have occasional flare-ups of violence between the SDF and the regime, as happened on Thursday. And the Israelis are conducting a counter-terrorism campaign against Hezbollah in the south of Syria.

It is this last war within a war that the International Crisis Group (ICG) described in a report on Thursday as the most dangerous and likely to grow through miscalculation into a larger war.

The Syrian war has entered a new stage with the regime of Bashar al-Assad gaining the upper hand. Israel, no longer content to remain a bystander as Damascus’s position improves, is now jockeying to reverse the deterioration of its strategic posture. In this endeavor it has formidable obstacles to overcome: the regime is more dependent than ever on Iran, which Israel regards as its most implacable state foe; other enemies, particularly Hezbollah and Iran-backed Shiite militias, are entrenched in Syria with Russia’s blessing; and the U.S., notwithstanding the Trump administration’s strident rhetoric, has done little to reverse Iran’s gains. Yet Israel’s hand is not so weak. Russia has given it room to act against Iran-linked military interests and appears to be more interested in balancing contending fighting coalitions than returning every last piece of territory to the Assad regime’s control. But if Russia wishes to eventually withdraw or draw down its forces, it will need to broker rules of the game. Russia has indicated scant interest in doing so, but if it does not, hostilities between Israel and Iran may threaten its accomplishments, particularly regime stability.

The report says that this is going to result in a larger war through miscalculation unless Russia takes on the responsibility of mediating a solution. The report says:

Russia should broker understandings that bolster the de-escalation agreement distancing Iran-backed forces from Syria’s armistice line with Israel; halt Iran’s construction of precision missile facilities and its military infrastructure in Syria; and convince Israel to acquiesce in foreign forces remaining in the rest of Syria pending a deal on the country’s future.

One can only think that this is a joke. None of these actors – Iran, Syria, Hezbollah or Israel – is going to agree to anything like this.

In fact, the thought of Russia negotiating some sort of peace agreement is itself a joke. Russia has already negotiated “de-confliction zones” or “ceasefire zones” in its Astana (Kazakhstan) peace process, but now Russia itself is the biggest violator of its own agreement, with massive bombing of deconfliction zones in Eastern Ghouta and Idlib.

There is only one entity that could possibly play the role of forcing a negotiated peace, and that is the United States, Policeman of the World. But the U.S., even with the help of a U.S.-led coalition, has neither the desire nor the ability to succeed at that role, and still has its hands full fighting ISIS.

As I have written many times, Generational Dynamics predicts that the Mideast is headed for a major regional war, pitting Sunnis versus Shias, Jews versus Arabs, and various ethnic groups against each other. Generational Dynamics predicts that in the approaching Clash of Civilizations world war, the “axis” of China, Pakistan and the Sunni Muslim countries will be pitted against the “allies,” the US, India, Russia, and Iran. International Crisis Group and Middle East Eye and Arab News