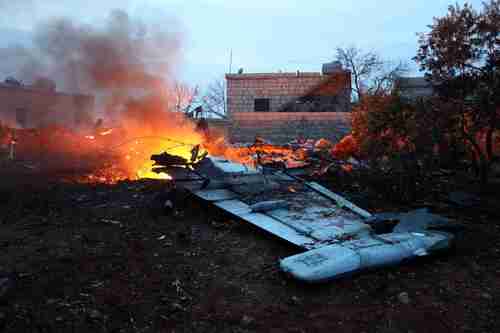 It was just a week ago, on February 3, that a Russian warplane was shot down in Idlib province by al-Qaeda linked Hayat Tahrir al-Sham (HTS), using a portable surface-to-air missile. The pilot ejected and was killed on the ground.

An Israeli F-16 warplane was shot down on Saturday by massive anti-aircraft fire fired by the regime of Syria’s president Bashar al-Assad and by Hezbollah in Lebanon. Both pilots ejected and were rescued on Israeli soil. One pilot was severely injured.

The series of incidents began when Israel detected what it assessed was an Iranian drone crossing into Israel from Syria. The Iranian drone was successfully intercepted by an Apache combat helicopter. the drone was downed by the Apache and recovered intact.

The drone had been launched from an Iranian launch pad near Palmyra in central Syria. Israel retaliated with an air strike against the launch pad, as well as against a dozen Syrian and Iranian targets.

Israel’s warplanes were met with heavy anti-aircraft fire from both Syria and Lebanon, suggesting that the drone attack might have been a planned ambush, with retaliation by the Syrian regime and Hezbollah. One Israeli F-16 warplane was downed by a Syrian anti-aircraft weapon, most likely an SA-5 supplied by Iran.

Iran’s foreign ministry spokesman said that Iran was only in Syria in an “advisory” role:

The claim about the flight of an Iranian drone and Iran’s involvement in the downing of a Zionist fighter jet is so ridiculous that it does not merit a comment.

This is because the Islamic Republic of Iran has advisory presence in Syria at the request of the country’s legitimate and lawful government.

Iran’s Brigadier General Hossein Salami was even more belligerent, saying that Iran would create a “hell” for the Zionists and that all American military bases in the region are within range of Iranian missile strikes.

Many analysts had hoped that the Iran nuclear deal would moderate Iran’s behavior. Instead, it appears that the infusion of huge amounts of money by lifting sanctions has made Iran much more aggressive in Syria, Lebanon, Iraq, and Yemen. Iran continues to militarize its “Shia Crescent,” and threaten Israel.

I’ve been warning for some time about the dangers of Iran’s military entrenchment in Syria. Iran seeks to us a Syrian territory to attack Israel, for its professed goal of destroying Israel. …

Our policy is absolutely clear: Israel will defend itself against any attack and any attempt to harm our sovereignty. Iran made such an attempt today. It violated our sovereignty, it infiltrated Israeli territory with an [unmanned] aircraft from Syrian territory.

This is both our right and our duty and we will continue to do so as much as necessary. Let no one make a mistake about this.

Turkish helicopter shot down in Afrin, days after Russian warplane downed in Idlib

On January 20, Turkey began its invasion of northern Syria, ironically named “Operation Olive Branch,” to defeat the Kurdish People’s Protection Units (YPG). The plan was a quick victory in the northern city of Afrin, followed by an advance eastward toward Manbij, where it was feared that they would clash with US forces.

Achieving victory in Afrin has been going slower than promised, and on Saturday, YPG militias shot down a Turkish helicopter, resulting in the deaths of up to 11 Turkish soldiers.

Estimates are that since Operation Olive Branch began, the YPG has killed over 20 Turkish soldiers, and the Turks have killed over 150 Kurdish fight.

A little while ago, one of our helicopters was downed. Of course all these things will happen – we are in a war. We will have losses, but we will also cause losses. Yesterday we destroyed and annihilated a very large rocket depot. Of course the YPG got mad about that. But of course we will make them pay heavily for that. Maybe one of our helicopters is gone, but they will pay for this. Not in kind, but so much more, because we are determined, and we believe we are superior. We will succeed in this as well.

It was just a week ago, on February 3, that a Russian warplane was shot down in Idlib province by al-Qaeda linked Hayat Tahrir al-Sham (HTS), using a portable surface-to-air missile. The pilot ejected and was killed on the ground.

Russia and Syria have both been taking revenge this past week by massive bombing of civilian neighborhoods in Eastern Ghouta and Idlib, including continued use of chlorine gas. Estimates are that 230 civilians have been killed by Russia and Syria in the last week. Hurriyet (Ankara) and Reuters and Globe and Mail (Canada)

With defeat of ISIS, war escalates, and Syria becomes more fragmented and chaotic

Each of these 14 armies and militias has a different objective. Some of them want a piece of Syria. Other just want to keep someone else from getting a piece of Syria. In the middle of everything, you have the psychopathic war criminal Bashar al-Assad. These conflicting objectives mean that there will be no peace in Syria for a long, long time. The Drive