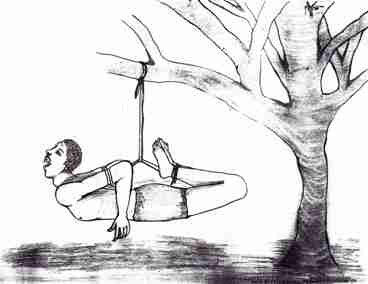 Graphic artist depiction of torture in Eritrea, based on interviews with Eritrean torture survivors (UN-OHCHR)

The Netherlands has expelled Tekeste Ghebremedhin Zemuy, Eritrea’s top diplomat, and declared him persona non grata, because the Eritrean embassy uses coercive methods to collect a “diaspora tax” from Eritreans.

Eritrea is considered is one of the most repressive governments in the world according to Freedom House. Thousands of people are jailed without charge; torture is common. People are required to work for years in enforced government service and the average monthly salary is $12.

Even migrants who escape to Europe to earn money are not free of the long reach of the Eritrean government, as they are subject to the “diaspora tax” of 2 percent of everything they earn.

The diaspora tax has been the subject of controversy because its application is arbitrary and is used as a means of control over the diaspora. An Eritrean who goes to the embassy because he needs something from the state will be told that even a simple service – sending a parcel or money home – requires a charge of 2 percent of his entire income for all the years he has been in the country. In addition, Eritreans are required to sign a so-called “regret form” admitting to crimes that may or may not have been committed, and according to reports is not given a copy of the form he signed.

Refusal to pay the tax or to sign the “regret form” has resulted in refusal of all services. It has also resulted in refusing food vouchers for family members back home, limiting them from accessing remittances, besides social exclusion and vilification.

In December 2011, UN Security Council resolution 2023 called on Eritrea to “cease using extortion, threats of violence, fraud and other illicit means to collect taxes outside of Eritrea from its nationals or other individuals of Eritrean descent.”

The same resolution accused Eritrea of using the tax to destabilize the Horn of Africa, saying some of the revenues were funding armed opposition groups in the region, including Somalia’s terrorist militant group al-Shabaab.

In June 2016, a UNHRC commission of inquiry report on human rights conditions in Eritrea found that the government continued to enforce indefinite military service and was responsible for arbitrary detention, torture, rape, murder, persecution, imprisonment in violation of international law, and enforced disappearances. The report said the systematic nature of these actions suggested that crimes against humanity had been committed.

The 2% Tax is collected as a critical part of a system of surveillance, with specific references to coercion in view of mental and social pressure, extortion, intimidation, fraud and/or blackmail. The specific organization and modalities relate specifically to the diaspora, but also involves family members by association.

Although these investigations have been going on for years, there was a precipitating event that finally caused the Netherlands to take some explicit action, on behalf of the 20,000 Eritrean nationals living in the Netherlands. A recording was made by Dutch radio program Argos in which an asylum seeker is being told by the head of the Eritrean embassy that he has to sign a so-called “regret form” in which he admits his guilt and that he has to pay 2 percent tax – over the past 4/5 years – before he can avail of consular service from the diplomatic mission.

Eritreans flee Eritrea solely due to the repression by the regime. Then they are being confronted with the fact that the Eritrean embassy in the Netherlands makes them pay diaspora tax, often under force and sometimes even through extortion. The parliament has raised its voice on this issue multiple times, but nothing changes about this situation, unfortunately.

Protesters in Amsterdam and Brussels were demanding that the Eritrean embassy be closed. This was rejected, but Dutch Foreign Minister Halbe Zijlstra expelled Eritrea’s envoy, saying in a letter to parliament, “In light of the continuous intimidation and force used in the collection of diaspora tax and its resulting social and political unrest, the cabinet is forced to give the Eritrean government a powerful signal.” Guardian (London, 9-Jun-2015) and Europe External Policy Advisors (EEPA) and In Depth News and Freedom House and United Nations – OHCHR and Tesfa News (Eritrea)

Eritrea’s Patriarch Abune Antonios has not been seen in months

An article that I wrote last year ( “19-Jul-17 World View — Eritrean government laughably uses Christian Patriarch as show prop”) described how Eritrean Orthodox Patriarch Abune Antonios, who had not been seen for ten years after being arrested in 2007 without charge and imprisoned in an unknown location, was trotted out to participate in a mass on July 16.

Worshippers were thrilled to see him because he had not been seen in public for ten years, but the whole thing was a farce because the government forbade him from saying a word at the mass and, after the mass, they bundled him back to prison at a new unknown location.

It had been hoped that after this appearance, Antonios would be permitted to walk free, but he has not been seen in public since then. On September 11, he should have delivered blessing on that day, which is marked by the Eritrean Orthodox Church as the start of the year according to the Julian calendar.

The patriarch is among over 10,000 prisoners of conscience in Eritrea, several hundred of whom are Christians. A surge in repression since May of last year, when Eritrean police were going from house to house, demanding to know the occupants’ religious beliefs, and arresting them if they give the wrong answer. It is believed that hundreds of Orthodox Christians were arrested. Independent Catholic News (16-Sep-2017)