In a bizarre disconnect, 40 percent of U.S. Catholics believe that Christian persecution around the world is “severe,” and yet they are more concerned about climate change and the global refugee crisis than the sufferings of their co-religionists.

According to a nationwide poll surveying the views of American Catholics on global Christian persecution, a full four-in-10 Catholics say that at least half of religion-based attacks around the world are directed at Christians.

The poll, conducted by Aid to the Church in Need-USA/McLaughlin & Associates and published on March 1, found that despite some awareness of Christian persecution, U.S. Catholics say they are less concerned about Christian persecution than about human trafficking, poverty, climate change, and the global refugee crisis.

“What the survey reveals quite clearly,” said George Marlin, chairman of Aid to the Church in Need-USA (ACNUSA), “is that there is a need to increase the engagement level of the US Catholic Church when it comes to global Christian persecution—both at the grassroots and leadership levels. The issue has to become a priority.” 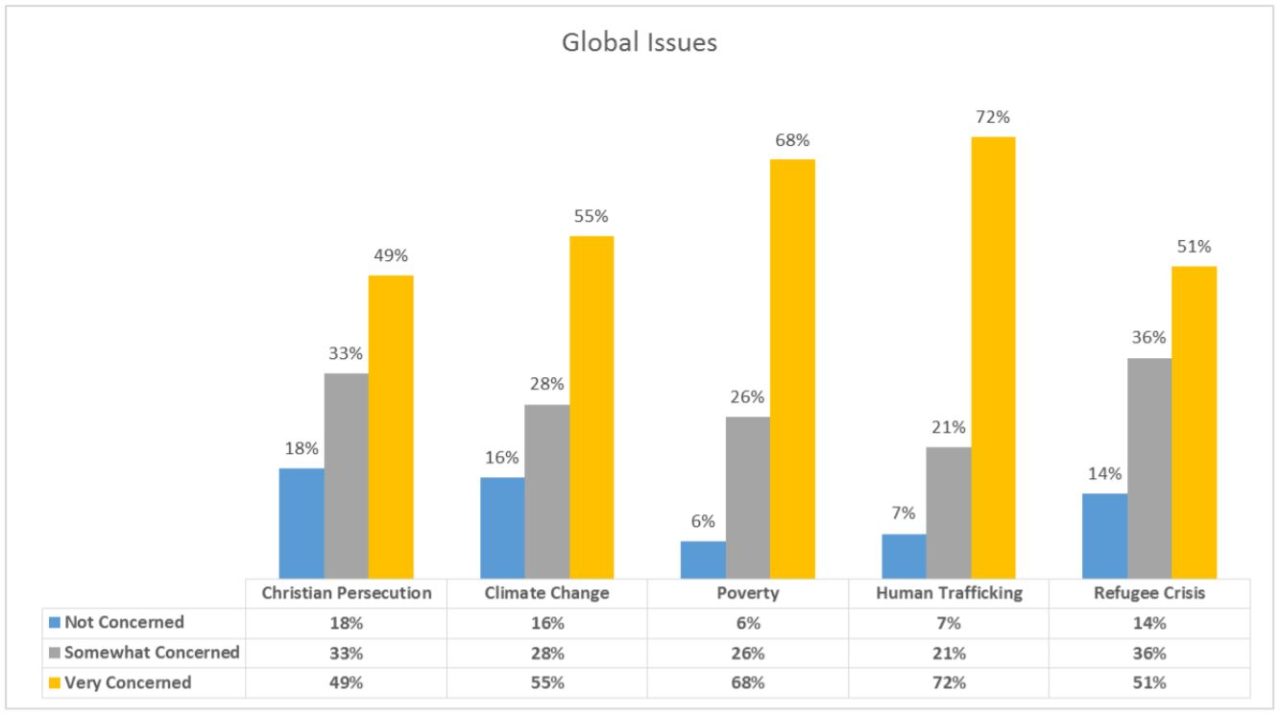 The survey aimed to measure how well-informed Catholics in America are regarding levels of Christian persecution worldwide, and in certain specific areas, Catholics scored quite well.

For example, when asked to rank the severity of Christian persecution in 14 countries, U.S. Catholics responded with the following list of the top five countries where Christianity is most fiercely attacked: North Korea, Iran, Iraq, Syria and Pakistan. This list roughly corresponds to the most recent yearly “World Watch List” of the 50 worst countries for Christians published by the Open Doors group that has monitored global Christian persecution for decades.

According to the Open Doors ranking for 2018, North Korea is the worst country for Christian persecution, followed by Afghanistan, Somalia, Sudan and Pakistan. Not far behind are Eritrea, Libya, Iraq, Yemen, and Iran.

In his analysis of the poll, Marlin stressed the need to engage U.S. Catholics on a personal level so that they experience the persecution of their brothers and sisters as an urgent situation that involves them personally.

“What we hope our poll will do is show the bishops and their priests that the laity need more education and leadership to give them a stronger sense of the seriousness and pervasiveness of Christian persecution around the world,” he said. “We have an obligation to raise our voice and stand up for persecuted Christians.”

In point of fact, worldwide Christian persecution is far worse than most American Catholics realize.

Christians are, by far, the most persecuted religious group in the world. “Christians are the victims of at least 75 percent of all religiously-motivated violence and oppression,” according to Aid to the Church in Need (ACN), and moreover “the extent of this persecution is largely ignored by our media.”

A minimum of 215 million Christians face severe persecution, taking the form of executions, rapes, and other forms of violence, not to mention the many other shapes this persecution takes in terms of harassment, threats to employment and personal livelihood and social ostracization.

During the year 2016, some 90,000 Christians were killed for their faith across the globe, making Christians by far the most persecuted group in the world, according to a 2017 study from the Turin-based Center for Studies on New Religions (CESNUR).

The director of CESNUR, Dr. Massimo Introvigne, told Breitbart News that whereas atheistic communist regimes were the greatest persecutors of Christians in the last century, “Islamic ultra-fundamentalism” has taken its place as the prime agent of persecution.

“In terms of the number of people involved, the gravity of the crimes committed and their impact, it is clear that the persecution of Christians is today worse than at any time in history,” said John Pontifex, editor of ACN’s most recent report.

In the 13 countries where Christians suffer the most intense persecution, the situation has worsened in all but one—Saudi Arabia—in the last two years, and conditions there have stayed the same.

“In almost all the countries reviewed,” the report read, “the oppression and violence against Christians have increased since 2015 – a development especially significant given the rate of decline in the immediate run-up to the reporting period.”

Pontifex said that the “PC agenda” among western governments and mainstream media curtails the attention that the Christian community requires.

“The UN and western governments send strong messages of support – but that’s not matched by action,” he said. “To date, the response of the UN has been too little too late. For example, Iraqi Christians from Mosul and Nineveh who ended up in Erbil were just given tarpaulins; people need homes, medicines and pastoral support.”