A grim new report on Christian persecution around the globe suggests that rather than improving, the situation of Christians worldwide is worsening, a fact whitewashed by mainstream media.

“Christians are the victims of at least 75 percent of all religiously-motivated violence and oppression,” declares the 2015-2017 report from Aid to the Church in Need (ACN), and moreover “the extent of this persecution is largely ignored by our media.”

In their report titled “Persecuted and Forgotten?”, ACN noted that in Iraq more than half of the country’s Christian population have become internal refugees, while in the Syrian city of Aleppo, the Christian population has fallen by more than 75 percent. Up until 2011 Aleppo was home to the largest Christian community but in just 6 years numbers have dropped from 150,000 to just over 35,000.

“In terms of the number of people involved, the gravity of the crimes committed and their impact, it is clear that the persecution of Christians is today worse than at any time in history,” said John Pontifex, the Report’s editor.

In the 13 countries where Christians suffer the most intense persecution, the situation has worsened in all but one—Saudi Arabia—in the last two years, and conditions there have stayed the same.

“In almost all the countries reviewed,” the report reads, “the oppression and violence against Christians have increased since 2015 – a development especially significant given the rate of decline in the immediate run-up to the reporting period.”

According to Christian Solidarity Worldwide, documented incidents against Christians include “being hung on a cross over a fire, crushed under a steamroller, herded off bridges, and trampled underfoot.” One estimate suggests that three quarters of Christians in the camps die from the harsh punishments inflicted on them.

But the second part of the report’s title—“forgotten”—is also key to understanding the situation of persecuted Christians worldwide. Particularly in the Middle East where Christians have been undergoing a systematic genocide, virtually no help has been forthcoming from Western (predominantly Christian) countries or from the United Nations.

“Governments in the West and the UN failed to offer Christians in countries such as Iraq and Syria the emergency help they needed as genocide got underway,” ACN’s website relates. “If Christian organisations and other institutions had not filled the gap, the Christian presence could already have disappeared in Iraq and other parts of the Middle East.”

In the forward to the report, Melkite Greek Catholic Archbishop John Darwish of Lebanon noted that up to the present, “the UN and other humanitarian organizations have provided no aid” leaving the oppressed Christians to fend for themselves.

John Pontifex told the Tablet that the “pc agenda” among western governments and mainstream media is preventing the attention that the Christian community requires.

“The UN and western governments send strong messages of support – but that’s not matched by action.” Pontifex said. “To date, the response of the UN has been too little too late. For example, Iraqi Christians from Mosul and Nineveh who ended up in Erbil were just given tarpaulins; people need homes, medicines and pastoral support.”

One exception to the systematic neglect from Western governments has been the central European country of Hungary, which in 2016 established a Deputy State Secretariat for the Aid of Persecuted Christians, making it the only nation in the world with a department of this nature.

So far, the new secretariat has sent assistance of more than four million euros to rebuild homes, churches and schools so that Christians can stay in their homes in the Middle East. They have also granted dozens of scholarships to Christian students in Africa and the Middle East who lost everything to militant Islamic terror groups.

Last week, the government of Prime Minister Viktor Orbán called together key Christian leaders from the Middle East for a three-day summit in Budapest to discuss targeted assistance to persecuted Christians. 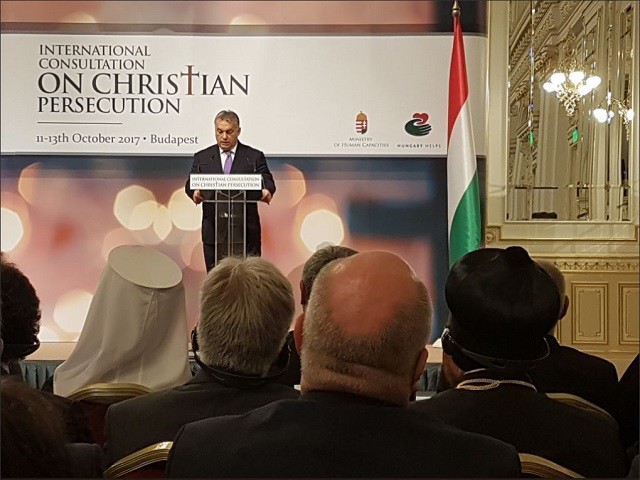 In his address to the assembly of prelates, officials and diplomats, Orbán said that Hungary had taken the opposite approach from that of the European Union. “They want to bring people here,” Orbán declared. “We are helping them to stay where they are.”

The Hungarian government has been channeling funds directly to Christian leaders and organizations on the ground in the Middle East, who best know how to make the most of the financing for the good of their people.

“All of us, Protestants, Orthodox, Roman Catholics, Coptic Christians—we face this persecution together,” Orbán said, while noting that around the globe a Christian is killed every five minutes for their faith.