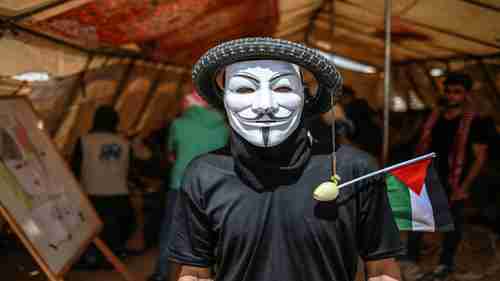 In the Muslim world, protests usually occur on Fridays, when worshippers pour out of mosques after Friday prayers.

On Friday, March 30, Land Day protests in Gaza led to numerous violent clashes with Israel’s army, when Gaza protesters threatened to break through the border fence with Israel. The first used teargas to stop the protesters, then live gunfire. 16 Palestinians were killed and 1,400 wounded.

On Friday, April 6, the number of protests appeared to be considerably reduced, although the protesters used new tactics. Protesters burned tires creating massive conflagrations at five different points along the border.

The purpose of burning the tires was to create black, thick smoke that would make it impossible for Israel’s army to see where the protesters were attempting to break through the border fence. The army used water cannons to put out the fires and giant fans to disperse smoke. Live gunfire was also used to stop the protesters, with the result that seven Palestinians were shot dead and over 200 more were wounded. The only good news about this situation is that these numbers were sharply lower than last week.

Although Hamas, the governing authority in Gaza, is encouraging protests on a continuing basis, the protests are all relatively minor except for the final one: The major event will occur on May 15, Naqba Day (Catastrophe Day), commemorating the creation of Israel in 1948. YNet News (Israel) and Reuters and Al Jazeera

Hamas, the governing authority in Gaza, has come under increasing criticism for the policies it is pursuing in Gaza. Even Arab analysts on television have criticized Hamas for having no apparent strategy at all except to encourage protesters, including women and children, to attempt to break through the border wall and risk getting shot and killed, with no advantage to them, to the Palestinians, or to Hamas for the bloodshed.

The Hamas government in Gaza has an entirely different strategy than the Palestinian Authority (PA)-Fatah-Palestinian Liberation Organization (PLO) government in the West Bank, led by Mahmoud Abbas.

Hamas’s strategy is the elimination of Israel, and so the Gaza protests are being pursued with the intention of leading to an armed conflict that Israel would lose. By contrast, Abbas’s strategy is full recognition of the state of Palestine existing side-by-side with Israel and is pursuing peaceful protests in order to gain international support for Palestine.

The problem for the Palestinians is that they cannot make any progress at all unless Hamas and Fatah have a joint strategy. Negotiations for a Hamas-Fatah unity government that began after the 67 day Israel-Gaza war in 2014 have failed completely, largely because Hamas and Fatah have completely different intentions about destroying Israel versus living with Israel.

The 27th conference of the Arab Parliament Federation met on Friday in Jeddah and stated the usual policies: support for an independent state of Palestine with its capital in Jerusalem and condemnation of Israeli attacks on Palestinian people and their land, sanctuaries, and properties. They also demanded that the international community put pressure on Israel to stops its crimes in Palestine.

But all of that is completely meaningless because those policies are subordinate to the major policy: unifying the Arab position toward major issues — the Palestinian cause and combating terror.

And there is no unity on the Arab position. What is the “Palestinian cause,” when even the Palestinians do not know what it means? What does “combating terror” mean when Hamas is internationally considered to be a terror organization, calling for the destruction of Israel?

And then, of course, there is the issue of Mahmoud Abbas, the Palestinian Authority president. Abbas is 82 years old, was born in 1935, and lived through World War II and the bloody wars between Jews and Arabs that followed the 1948 partitioning of Palestine and the creation of the state of Israel. Having lived through that horrific war, Abbas has been a major force in maintaining a semblance of peace between the Palestinians and Israelis.

From the point of view of Generational Dynamics, the reason that Abbas and Fatah are far more moderate than Hamas is because Abbas lived through the horrors if the Arab-Jewish war of 1948 and does not want to see it happen again. Younger leaders, in both Gaza and the West Bank, would have no such inhibitions. I believe that Abbas himself understands this, and that is why he has not stepped down even though he has been in declining health. But his death or retirement would bring new, younger leadership into power, and that could well mean a new, massive, bloody war between Jews and Arabs.

Generational Dynamics predicts that the approaching Clash of Civilizations world war will pit China, Pakistan and the Sunni Muslim countries against the U.S., India, Russia, and Iran. In the Mideast, Generational Dynamics predicts a full-scale Mideast war, pitting Jews against Arabs, Sunnis against Shias, and various ethnic groups against each other. Al Monitor (13-Mar) and Arab News and AFP and i24 News (Israel)